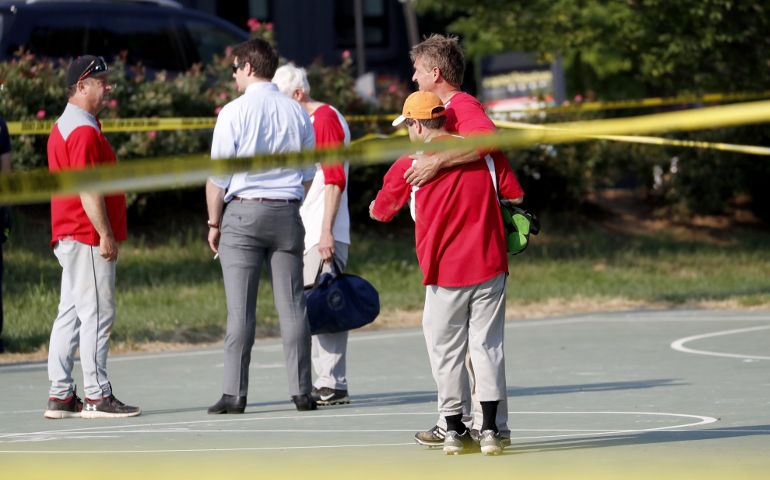 As grateful as we are for these displays of civility and human concern, we cannot forget that the reality of governance calls for real work.

In the days following the shooting of a congressman, an aide, a lobbyist, and two police officers at a ball park in Alexandria, Virginia, we saw members of Congress rise above division and partisanship, giving us a glimpse of the true promise this body of elected officials holds.

“An attack on one of us is an attack on all of us,” House Speaker Paul Ryan, a Republican from Wisconsin, proclaimed from the floor of the House later that day, declaring that “it is humanity that will win the day.” The Democratic House leader, Nancy Pelosi of California, echoed Ryan’s words, calling the attack “an injury in the family.” She added a prayer that “we can resolve our differences” in a way that “takes us closer to e pluribus unum.”

Still, the political leadership of Washington was shaken. Reporting in the Christian Science Monitor caught the mood on Capitol Hill: “Party labels were shattered as lawmakers united around their common humanity and American-ness. ... They denounced violence and appealed to each other and the public for more listening and less yelling.”

We deeply regret the violence perpetrated against these public servants. Rep. Steve Scalise of Louisiana, the House majority whip, especially will have a long, difficult road to recovery. Our prayers are with him and the other victims. We pray, too, for the family of the gunman, James T. Hodgkinson III, who was shot by the security detail and died later of his injuries.

The statements and actions by our elected officials in the aftermath of the shooting — Vice President Mike Pence went to Capitol Hill to donate blood in support of those wounded — were genuine expressions of the common humanity that binds us all together. For that we are thankful.

We can see in these expressions the sincere longing for e pluribus unum but also recognize it is far more difficult to realize in the reality of legislating than it is in emotional and heartfelt expressions of sorrow. As grateful as we are for these displays of civility and human concern in the face of extreme circumstances, we cannot forget that the reality of governance is difficult and calls for real work. “Humanity will win the day” is a noble sentiment, but it means little without policies that award humanity a victory.

At this time, right now, a significant portion of Americans are in serious risk of losing access to a basic human right: health care. Their lives are in danger. If ever an issue cried out for public displays of civility, compassion and united action, it is health care.

If Congress truly wanted to become a body that talks and listens, right now at this time, there is no better issue to open for discussion than health care reform. But those words are betrayed by contrary action. Instead of an open, public debate over this issue that is so crucial to this nation, Republican Senate leaders — all men — worked behind closed doors to fashion legislation that has more to do with scoring a political victory than fixing health care.

The legislation was released June 22, and its details are no less disturbing than those of its counterpart in the House. Our No. 1 concern is the changes both bills would make to the Medicaid program for the poor and disabled. According to the Kaiser Family Foundation, 20 percent of all Americans – 70 million people – receive their health care cover through Medicaid. The 51-year-old program covers 40 percent of all children in this nation.

And yet, the bill would phase out the expansions to Medicaid that were a result of the Affordable Care Act. And, it would place a huge burden on states to fund the cost of providing Medicaid to their poor and disabled men, women and children. In other words, the level of coverage will depend even more so on where people live, a choice most poor Americans do not have.

People who live in poverty, in nursing homes, with disabilities – these are not the voters politicians tend to court. They like to keep older Americans on their side, and so the bill would not make major changes to another federal health care program, Medicare. And they like the wallets of the rich, so wealthier Americans will see their tax bills reduced.

Senate Majority Leader Mitch McConnell of Kentucky has made it his personal project to bring the bill to vote before July 4. Why? According to The Hill, “McConnell does not want the Obamacare debate to eat up more precious legislative time, with nearly half the year gone and congressional Republicans and President Trump still looking for a major legislative victory.”

Once the bill is put before the Senate, McConnell will allow — in the place its members take pride in calling “the world’s greatest deliberative body” — only 10 to 20 hours for debate. So much for more listening.

McConnell has said he will “make every effort to pass a bill that dramatically changes the current health care law.” Score one for political victory, but what about the needs of the people? What about the millions of Americans who are likely to lose health insurance? When will they be heard?

It is well and good that Republicans and Democrats can stand in a prayer circle holding hands, raising up their wounded colleagues, but that is an empty gesture if they do not act on critical issues. We can find no more critical issue than health care of all Americans.

This is a dark time for American politics, but we have seen glimmers of what could be. Now is a time when we must reclaim the rights and duties bestowed on us by our Constitution and our heritage. We must demand that we be heard. Contact your elected officials and demand this bill be stopped. Too much is at risk. The Affordable Care Act needs fixing, but how to fix it must be discussed in open, public debate, and reforms must come from an honest decision-making process.