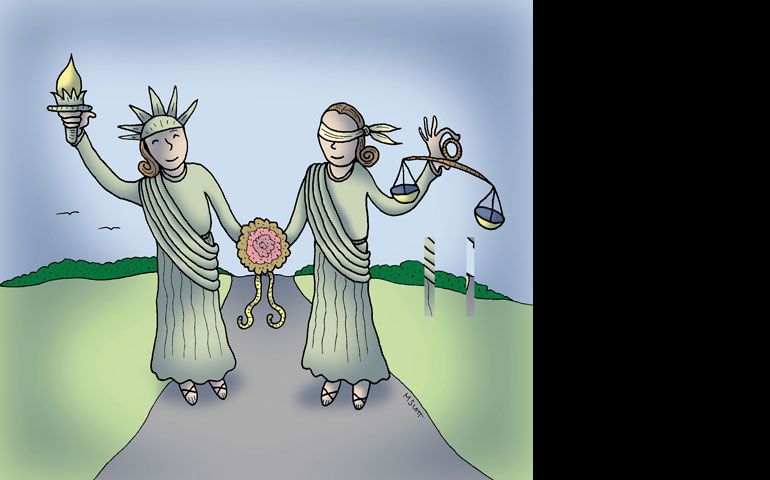 Reflective of swiftly changing social attitudes and anchored in the language and rationale of civil rights, the U.S. Supreme Court's June 26 decision makes same-sex marriage constitutional throughout the land.

In a jolting shift in reality, the court said the term marriage in the civil realm can no longer apply exclusively to heterosexual couples. Over the long arc of human history, the recent acceptance of homosexuality and homosexual unions is easily perceived on one level as a disorienting, even severe, realignment of the social order.

In each case, old certainties that once comfortably contained our presumptions are shattered. Even those who marvel at or celebrate such new realities might, at the same time, find them unsettling.

The Catholic church, which has used some of the most severe language of major denominations in its condemnation of homosexuality, labeling those with a homosexual orientation "intrinsically disordered," is especially challenged by the ruling.

At least its leaders are, for it has become clear in recent years that when it comes to believers, Catholics are among the most accepting of homosexuality. In terms of same-sex marriage, according to recent Pew Research polling, "Among Catholics and white mainline Protestants, roughly six-in-ten now express support for same-sex marriage."

Churches certainly don't run on polling data, but the bishops should at least be informed of what the flock is thinking. And the majority of the flock is not in agreement with assertions such as those voiced by Archbishop Joseph Kurtz of Louisville, Ky., who called the decision "a tragic error."

Kurtz, president of the U.S. Conference of Catholic Bishops, compared Obergefell v. Hodges to Roe v. Wade and said that just as Roe v. Wade did not settle the question of abortion, Obergefell v. Hodges does not settle the question of marriage. "Neither decision is rooted in the truth and, as a result, both will eventually fail. Today the Court is wrong again. It is profoundly immoral and unjust for the government to declare that two people of the same sex can constitute a marriage."

The comparison with Roe is simply way off base. Obergefell is not a matter of life and death. The case thus stated by Kurtz also places the conference in the posture of combatant -- with everyone: gays and lesbians, their families, government structures, not to mention the church itself in the expression of the many Catholics who disagree.

Further, if the church's experience with Roe is any indication, taking the combative approach will mean endless years of litigation and lobbying, convincing few and alienating many while further depleting whatever political capital the church might have left.

The Supreme Court ruling on same-sex marriage has, like the Affordable Care Act before it, raised new questions about religious freedom -- how it is interpreted in the course of day-to-day life, and who can claim it as a means of exempting themselves, individuals or businesses, from following the law. These complex matters will demand more of the bishops than a foot-stomping "no."

As Jesuit Fr. Tom Reese points out in his analysis (see story), a combative stance is not the only option. First, the church's treatment of divorced and remarried people is an apt comparison to gay couples. Divorce and remarriage is legal in all states, but the church is not required to perform such weddings. Ministers remain free to denounce divorce. At the same time, it is rare that Catholic institutions fire people who divorce and remarry; moreover, they and their new spouses often receive benefits. Such consideration is not viewed as an endorsement of a lifestyle.

Further, Reese points out, "In Catholic morality, there is nothing to prohibit a Catholic judge or clerk from performing a same-sex marriage. Nor is there any moral obligation for a Catholic businessperson to refuse to provide flowers, food, space and other services to a same-sex wedding." Bishops, even those intent on railing against the decision, need to make that point clear to their people.

Fortunately for U.S. Catholics, examples exist of other episcopal voices who took a more measured and prudent approach. Cardinal Donald Wuerl of Washington, D.C., wrote that the meaning of marriage for the church was the same post-Supreme Court ruling as it was before.

The practical challenge for the church and its agencies, he said, is the need "to balance two important values, the provision of appropriate health care benefits for all church personnel including their spouses, and the avoidance of the perception that by doing so we accept a definition of marriage and spouse contrary to faith and revealed truth."

Bishop Gregory Hartmayer of Savannah, Ga., wrote, "This decision of the Supreme Court is primarily a declaration of civil rights and not a redefinition of marriage as the church teaches."

He warned that those on either side of the issue are not dispensed "from the obligations of civility toward one another. Nor is it a license for more venomous language or vile behavior against those whose opinions differ from our own."

In a statement following the decision, Chicago Archbishop Blase Cupich urged calm and "mature" reflection. "The Church must extend support to all families, no matter their circumstances, recognizing that we are all relatives, journeying through life under the careful watch of a loving God," he said.

We suspect that for a time, at least, the air will be full of warnings about the ongoing march of a "gay agenda" and threats to everything we have previously understood about marriage. The ruling was certainly due, in part, to the activity of the lesbian, gay, bisexual and transgender community and its striving for rights during the past 40 years.

But bishops and others should not underestimate the power of human experience nor the depth of insights gleaned in the short period during which parents stopped being embarrassed by their children, and gay children stopped hiding themselves and their sexual orientation.

Cupich's "take a deep breath" approach seems a far more productive way to sort out the tangle of issues that certainly will unravel in the wake of this decision. The bishops -- many of whom like to compare themselves to fathers of a family -- might, before they commit to a protracted fight, sit down with gay and lesbian Catholics and their families and respectfully listen to their stories.

Meanwhile, we need to call a halt to actions that will further divide and damage the body of Christ. Almost immediately, different models have surfaced for handling gay marriage in the context of Catholic institutions.

On one hand, officials at Jesuit-run Fordham University wished J. Patrick Hornbeck and his male spouse "a rich life filled with many blessings" following their marriage the day after the Supreme Court decision.

While noting that church teaching does not support same-sex marriage, a school spokesman said Hornbeck, chairman of the theology department, had a constitutional right to marry, "and like all University employees, students and alumni, is entitled to human dignity without regard to race, creed, gender, and sexual orientation."

But in the Philadelphia archdiocese, where Archbishop Charles Chaput predicted dire social consequences as a result of the decision, Waldron Mercy Academy decided not to renew the contract of Margie Winters, director of religious education and outreach, because she is married to another woman.

According to a July 8 report on Philly.com, Waldron Mercy Principal Nell Stetser explained in a letter to parents that the school "recognizes the authority of the archbishop of Philadelphia, especially in the teaching of religion, because we call ourselves Catholic."

According to the report, many of the parents are supportive of Winters, who has worked at the school for about eight years, and they are angry at the archdiocese.

While an archdiocesan spokesman denied that the archdiocese had anything to do with Winters' dismissal, Stetser said in the letter that "my duty is to protect our school's future," and there apparently is no perceived threat from students' parents.

Fordham's response stems from the correct understanding of the Supreme Court ruling: It advances societal understanding of equality and non-discrimination. That is something the church can and should embrace. Church leaders certainly shouldn't fight it.

Justice Anthony Kennedy's majority decision acknowledges a religious exemption in the recognition of same-sex marriages, the meaning of which Catholics need to study and discuss maturely and calmly. It won't be an easy discussion, but it will be good for the community.

What we must avoid at all costs is a spate of firings of Catholic high school track coaches and math teachers. We can respect a narrow definition of the ministerial exemption out of respect for religious belief, but the broadening of the definition of "minister" to include schoolteachers, food pantry workers, diocesan accountants and parish musicians is wrong and must be resisted.

Furthermore, if state Catholic conferences work to enact laws against discrimination in employment and accommodations based on sexual orientation, that would help heal wounds in the religious community and society at large.

Editorial | Editorial: Go beyond a foot-stomping 'no'

How to save Western civilization — again

Lack of priests continues to close parishes, yet there is still no discussion