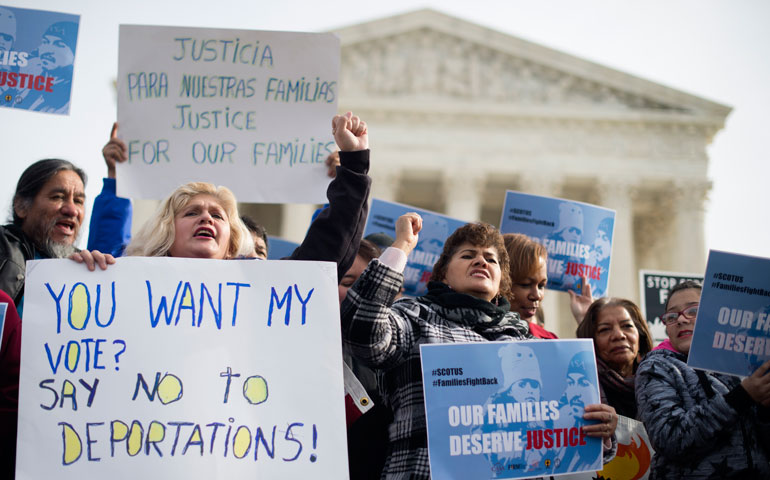 In the past couple of columns, I looked at the candidates running for president in the two parties, which is always where election analysis should start. We vote for the person, not the platform, and many voters are as concerned about finding a candidate likable as about agreeing with any of the candidate's particular policy positions.

Whoever wins may or may not be able to get specific proposals through Congress. That said, every campaign allows the country to focus on a set of issues, and those issues never look the same at the end of a campaign as they did at the beginning.

This year, on a host of issues, the differences between the two parties may be more pronounced than in any election since Ronald Reagan defeated Jimmy Carter in 1980, maybe even since Lyndon Johnson defeated Barry Goldwater in 1964. In both of those elections, the Republican Party went hard right. They got crushed in 1964, but Reagan trounced Carter in 1980, another testament to the fact that voters select people, not ideas. The sunny, confident Reagan was a far better messenger for the conservative creed than was the snarling Goldwater.

On no issue is the gap between the two parties bigger than on immigration. The leading GOP candidates are only arguing about how high the wall between Mexico and the U.S. should be, and who will pay for it, while the Democrats are firmly behind comprehensive immigration reform that includes a pathway to citizenship for the 11 million undocumented immigrants already in the country.

Many have been surprised by the potency of the anti-immigrant fervor on the right, especially as it has careened into blatant nativism.

After the 2012 elections, the GOP looked at Mitt Romney's dismal performance among Latinos and concluded they had to reach out to this fast-growing demographic. But the internal politics of the U.S. House of Representatives, where the tea party caucus exercised a veto, kept immigration reform from being passed.

It turns out the politics of the House reflected the will of the GOP base. Trump has ridden his immigrant-bashing to the top of the polls.

The difference between the two parties on immigration is not only large; it is consequential. Presidents enjoy wide latitude over immigration policy. A win by Trump or Texas Sen. Ted Cruz would be seen as a mandate to crack down on undocumented immigrants. There really would be a wall.

On the other hand, if the Democrats win, I expect Republicans in Congress would be only too happy to finally pass immigration reform and get the issue behind them.

Rhetorically, the two parties seem just as far apart when it comes to addressing the turmoil in the Mideast, especially the rise of the Islamic State group. The Republicans rant and rave about President Barack Obama's lack of leadership, but when they specify what they would do differently, the specifics do not look much different from what Obama is already doing. Only South Carolina Sen. Lindsey Graham was willing to be forthright about his desire to send ground troops into Iraq and Syria, and he has already dropped out of the race.

The Democrats are promising to follow in Obama's footsteps, taking small military steps, alongside a host of diplomatic efforts, and crossing their fingers that things do not get worse, at least not worse for Americans and Europeans. The Democrats, regrettably, seem indifferent to the sufferings of the people in Syria and Iraq.

Unlike immigration, U.S. foreign policy would not be hugely altered by the election result. Yes, a Republican would be more bellicose in language, but the Pentagon is not going to encourage any president to rush into another misguided foray as occurred in Iraq.

Reagan liked to speak like an unreconstructed cold warrior, but the only country he sent U.S. troops to was Grenada, which was conquered in a matter of minutes. When terrorists killed dozens of Marines in Beirut, he pulled out of Lebanon.

Even the GOP promise to "tear up" the Iran nuclear deal would largely be unrealizable by January 2017.

Both parties have seen increasing levels of anger against Wall Street. It would be ironic, indeed, if the Democrats nominate Hillary Clinton, who is a darling of Wall Street, and the Republicans nominate Trump or Cruz, both of whom denounce Wall Street at every turn. Franklin Delano Roosevelt would be turning over in his grave.

No one in either party, including Vermont Sen. Bernie Sanders, is too clear how they would tackle the income inequality that has Americans worried and for which Wall Street is a useful foil.

Yes, Sanders and former Maryland Gov. Martin O'Malley promise an updated version of the 1933 Glass-Steagall Act, which separated commercial banking from investment banking. And all the Democrats are pledged to removing the cap on income subject to FICA tax, which would go a long way toward stabilizing Social Security.

But it is difficult to imagine the Democrats gaining the White House and enough votes in either chamber of Congress to raise the minimum wage or create differentiated tax liabilities for corporations based on their wage scales.

The GOP, no matter who wins, would seek to cut taxes, which is a truly bad idea, and to eliminate regulations, an even worse idea. Tax cuts could probably pass through Congress and a president can terminate many regulations on his or her own authority.

Both policies would likely result in a short-term boost to the economy, while causing long-term harm, respectively, to the fiscal health of the budget and the physical health of the people. But Americans today are not known for taking a long view of anything, and I fear that both tax cuts for the wealthy and deregulation would be popular.

One issue dear to the hearts of progressives might be decided before the election. The Trans-Pacific Partnership negotiated by Obama would normally be a tough sell in an election year. But if Trump or Cruz becomes the GOP nominee, and congressional Republicans are looking for a way to distance themselves from either of them, they could pass the trade deal. Both Cruz and Trump oppose the Trans-Pacific Partnership, as do all the Democrats, but Obama would not need many Democratic votes to get it through Congress.

Another issue dear to progressives, gun control, will get a lot of attention in the coming election but with no measurable effect on policy. Republicans wrap themselves in the Second Amendment as often as they can, while Democrats, unwilling to argue for the kind of policies that would curtail gun violence, come up with half-measures that do not ring true.

In any event, it is virtually impossible to imagine the next Congress passing anything like the assault weapons ban that was enacted into law in 1994.

On issue after issue, what is obvious is that large swaths of the American electorate view the world through vastly different lenses, discounting evidence that does not confirm their prejudices, increasingly allergic to compromise, dependent on special-interest fundraisers who drive both parties to adopt the most extreme positions on a host of issues. Is this what the Founding Fathers envisioned?