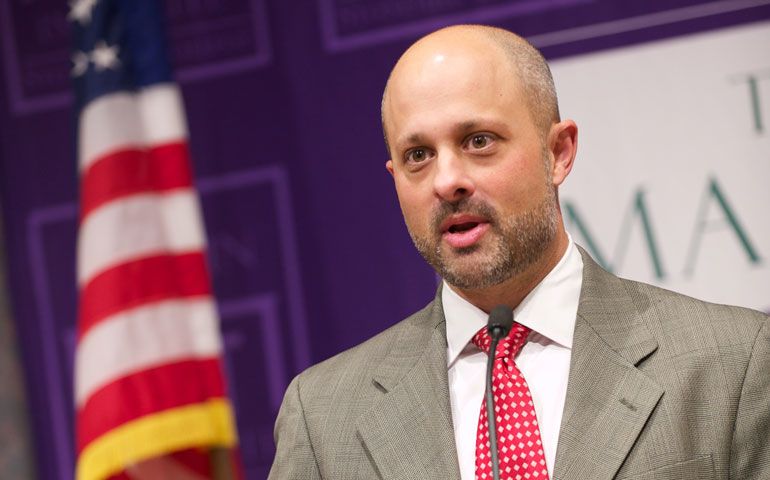 "Every student should have the option to graduate from a public college or university in their state without taking on any student debt," it states.

This is not only unprecedented, but it builds upon innuendo that fails to understand the difference between private and public schools, according to Patricia McGuire, president for more than 25 years at Trinity Washington University, a Catholic women's school in Washington, D.C.

"It's pretty insulting to the schools that are actually carrying a disproportionate share of the burden when it comes to helping low-income students," she said. "There's this mythology out there that private colleges serve the rich and public schools serve the poor. That is absolutely not true."

At Trinity, founded in 1897 by the Sisters of Notre Dame de Namur, nearly 85 percent of students are on Pell grants — financial aid for low-income students. That number is closer to 10 percent at area public institutions, McGuire said.

"We are smaller, but proportionately we serve a much larger low-income population than the state universities in this region," she said. "Many flagship public institutions are very wealthy, and they cater to a wealthy elite."

Catholic colleges were founded in U.S. cities in the 19th and early 20th centuries to serve immigrant populations — largely Irish, Italian, German and Polish — because Catholics were barred from mainstream institutions. And many stayed in those cities.

"We turned our attention to serve the neediest populations in our cities as a matter of social justice," McGuire said. "We don't have big endowments. People will say, ‘Well, Georgetown.' Georgetown is not comparable. Boston College, Notre Dame — there are a few very elite, very wealthy Catholic institutions, but the mainstream Catholic institutions serve low-income populations."

Michael Galligan-Stierle, president of the Association of Catholic Colleges and Universities, agrees.

"We are pleased that college affordability is being discussed by the presidential candidates, as it has long been a concern of Catholic higher education," he said. "Serving underserved, first-generation and immigrant families, in fact, is the reason why many Catholic colleges and universities were founded, so access and affordability are in our DNA."

There can be a wide gap between campaign promises and what actually transpires, Galligan-Stierle cautioned. "The notion that public higher education could be delivered without charging tuition does not eliminate costs from the equation. While admirable in its goal, this idea leaves a number of practical questions unanswered."

Among those questions are whether public schools can accommodate all the new students, whether those students will get the support that they need, and what will happen to their Pell grants.

"Is free tuition at institutions with low graduation rates really the best use of our tax dollars?" he said.

If Clinton's plan comes to pass — and experts say that's a very big if — all private colleges and universities would feel the pressure, said Peter Ubertaccio, associate dean for interdisciplinary programs at Stonehill College, a Catholic school in Easton, Mass.

"The implications are pretty significant for the system of higher education in the United States, and mission-driven Catholic institutions are an important part of that system," he said. "Catholic institutions will have to work that much harder to demonstrate that the quality of instruction, their mission-driven focus, and their student outcomes will be worth the cost to families."

The plan, Ubertaccio added, will particularly squeeze smaller Catholic schools, with less-healthy endowments, that are already struggling to meet students' needs. But he predicts the plan has little chance of passing both houses of Congress.

" ‘Free' really isn't," he said. "Congress and the states are not going to easily go along with such a proposal." A President Hillary Clinton doesn't need to convince Sanders, but House Speaker Paul Ryan, or Mitch McConnell, whether he is Senate majority or minority leader, according to Ubertaccio. "On this issue, she's not likely to get it."

McGuire agrees the plan is unlikely, but she is still worried about it. "Cooler heads than mine say, ‘Don't worry about it. It's not going to happen,' " she said. "My job is somewhat different. If I see a risk on the horizon that could be very harmful to my students at Trinity, it's my job to say, ‘This is a risk that would be intolerable.' Speaking out early on the topic puts the marker down."

At The Catholic University of America in Washington, D.C., John Convey, the school's provost from 1997 to 2007 and currently education chair, thinks it's too early to predict the plan's impact.

"When politicians throw out these ideas, they sound great. To have free education for two years or for four years," he said. "But they don't lay out the plans. Even if they laid out the plans, those are going to be chewed up by Congress."

Catholic schools, all of which depend upon tuition, stand to be potentially impacted by the plan, according to Convey. And it's already a challenge to decide how to dole out scholarships.

"You have a certain pot of money that you can use, and you try to maximize its impact," he said. And just because a student is offered a scholarship package doesn't mean that student will accept it. By the time the student has accepted an offer from another school, there's not much the first school can do.

"You don't know that until it's too late," Convey said. "There's an art to this and a little bit of a science."

In fact, according to the Galligan-Stierle, Catholic schools are already doing such a good job helping connect students with financial aid that policymakers ought to be looking to them as models of success.

Of full-time, first-year students on Catholic campuses, 93 percent receive financial aid of some sort, and the average award is $16,788. And, he adds, nearly a quarter of the 200 member institutions of the Association of Catholic Colleges and Universities have at least half of their first-time, full-time students on Pell grants. At some schools, there are 80 percent Pell grant recipients. And Catholic schools are bucking the consumer price index report of an 88 percent increase in textbook costs from 2006 to 2016.

"Catholic colleges and universities reported an average 22 percent increase in the prices of books and supplies," Galligan-Stierle said.

The answer, she said, is no. And where the Clinton program targets families earning up to $125,000 annually, the median family income for Trinity students is $25,000. "Hillary Clinton's program discriminates against students who choose Catholic colleges, women's colleges, and historically black private colleges, because it primarily gives this aid to state institutions, public schools, many of which are extremely wealthy," she said.

The Donald Trump campaign did not respond to questions about the impact the free college program would have on Catholic schools.

But McGuire isn't convinced, even though Trinity would be included in that support for minority-serving institutions.

"It's an afterthought, and it's not equal," she said. "My point throughout this has been that the students who are very low-income, who need the most help in this country, should be getting the aid. It should not matter whether they attend a private or a public university. What matters is the income level of the students and whether they're getting enough financial aid. This Clinton proposal turns that on its head."

Asked to imagine a worst-case scenario, wherein the plan would pass through Congress as it's been proposed thus far, McGuire said she's a fighter and she won't let her school go out of business. Trinity would likely need to deliver a different sort of education, perhaps more online and part-time adult education, she said. But, in so doing, it would have to make sure it was evolving for the right reasons.

"Are you doing it just to stay alive, or to achieve mission?" she said.

Asked whether other Catholic schools might need to shut their doors under the plan, McGuire said that's a concern.

"I think it's a real possibility, because not every institution is nimble enough to develop new product lines," she said. "I think it could happen to some — that they would go out of business. I do not see that as unusual."

An invitation to get past the shallow, well-charted waters of 'wokeness'

Democrats running for office, this is how you talk about 'free college'