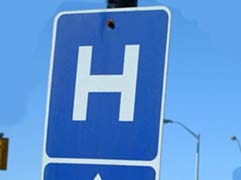 "Religiously affiliated hospitals across the country inappropriately and unlawfully deny pregnant women emergency medical care," the ACLU said in a letter to the Medicaid and Medicare administrator July 1. "This issue was recently highlighted by a situation in Phoenix, Arizona," it said.

The reference is to a case at St. Joseph's Hospital in Phoenix, in which an ethics board approved the termination of an 11-week old fetus because the mother's life was in danger. Though the procedure was carried out, a Catholic nun on the ethics board was reprimanded by the local bishop, who said the procedure violated church law and should not have been allowed.

"While the hospital in this case made the right decision in saving this woman's life, the subsequent treatment of the staff could have a chilling effect on the staff at hospitals across the country that may face similar situations in the future," said Daniel Pochoda, Legal Director of the ACLU of Arizona.

"Religiously-affiliated hospitals -- which are often the only hospital in a particular area -- are not exempt from providing critical care to patients who come through their doors," he said.

"The situation in Phoenix is part of a worrying pattern of religiously-affiliated hospitals denying emergency reproductive care to patients," an ACLU statement said. It cited an article in the American Journal of Public Health that reported instances "in which miscarrying women were forced to travel to another facility after religiously-affiliated hospitals refused to terminate their pregnancies, and a woman who was denied care until the moment her fetus' heartbeat stopped, placing her in grave peril."

The ACLU letter warned of "potential violations of the Emergency Medical Treatment and Active Labor Act (EMTALA), 42 U.S.C. § 1395dd, and the Conditions of Participation of Medicare and Medicaid (COP), 42 C.F.R. § 482.13, by religious hospitals that refuse to provide emergency reproductive health care."

"Religiously affiliated hospitals are not exempt from complying with these laws, and cannot invoke their religious status to jeopardize the health and lives of pregnant women seeking medical care," the letter said.

But Sister Carol Keehan, a Daughter of Charity who is president and CEO of the Catholic Health Association, told Catholic News Service July 9 that "a couple of stories that the ACLU has dredged up doesn't hold a candle to the competent care and respect for both mothers and their infants that have been a daily part of life in the maternity units and neonatal units of Catholic hospitals for decades."

In contrast to the "unsubstantiated" examples cited by the ACLU stands a history of "hundreds of thousands of women and their infants who have been cared for wonderfully well" in Catholic hospitals, she added.

A copy of the letter (a pdf file).

On DACA anniversary, bishop urges pathway to citizenship for 'Dreamers'

The Elizabeth Warren economic hymnal is in Biden's pew