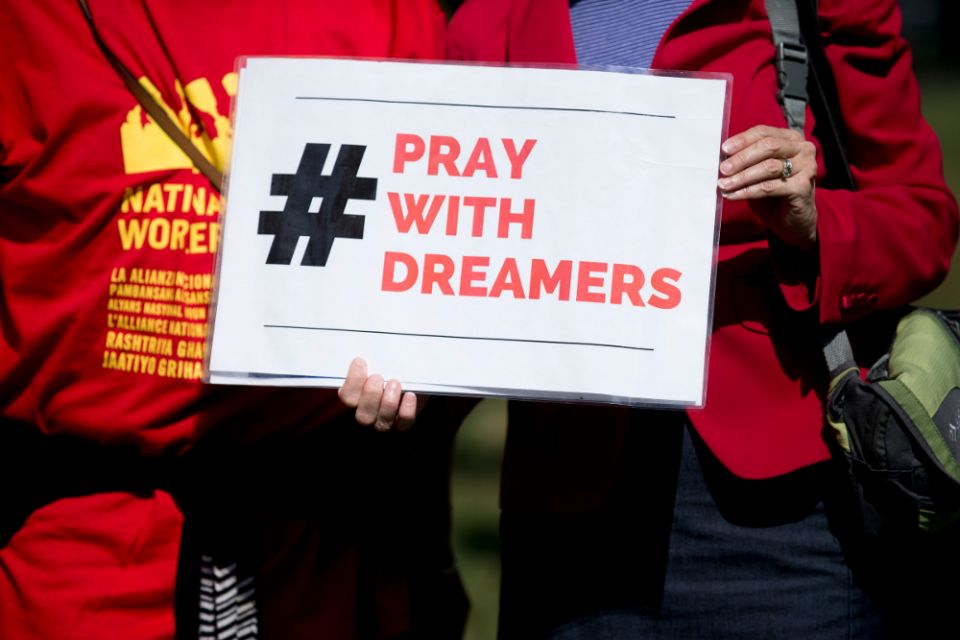 Demonstrators attend a rally calling for the passage of a clean Dream Act with no conditions included near the U.S. Capitol in Washington, Sept. 26. (CNS/Tyler Orsburn)

The head of the Association of Jesuit Colleges and Universities has called on Jesuit alumni serving in Congress to live up to Jesuit values by protecting young undocumented immigrants who were brought to the United States as children, also known as Dreamers.

Jesuit Fr. Michael Sheeran, president of the association, spoke alongside other higher education leaders, Dreamers and members of the House and Senate at an Oct. 25 press conference in support of the Dream Act, which would grant Dreamers legal status.

Rep. Peter Welch (D-Vermont), a graduate of Jesuit-run College of the Holy Cross in Worcester, Massachusetts, and a co-sponsor of the Dream Act, told NCR that Sheeran's speech enunciated the "moral dimension" of leadership.

According to Sheeran, about 10 percent of Congressmen and women graduated from Jesuit colleges and universities. He specifically challenged them and the "scores more" who attended Jesuit high schools, reminding them that they were taught "responsible citizenship." A copy of the speech was also sent to all Jesuit alumni in Congress.

Congress has until early March 2018 to pass a bill protecting the approximately 800,000 immigrants who benefit from the Deferred Action for Childhood Arrivals (DACA) program. DACA currently grants them work authorization and protection from deportation but will begin expiring for about 1,400 people each day starting March 5, 2018.

"You learned in school about the obligation to respect and protect the natural rights of other human beings, especially when they stand in need before you," Sheeran said. "You now have the power … to do justice for these students. Live up to what you’ve learned in our schools. And persuade your peers to do the same. Republican, Democrat, on this issue be 'a man or woman for others.' "

Sheeran also praised Dreamers, saying that they have "much to give our country" both personally and economically.

"They are excellent, well-prepared students who held their mother’s hand or clung to their father’s neck as they came across the border," Sheeran said. "They’ve done nothing wrong. Instead, they serve others."

Read this next: Trump has put anti-immigrant campaign promises into action

Welch told NCR that some members of Congress who "acknowledge that the Dreamers have a meritorious claim" still "want to use [Dreamers'] aspirations as leverage to accomplish other goals … like build a wall or do internal enforcement."

Sheeran "is suggesting that members step back and look at this from the perspective of what's the moral choice. And if you look at it that way there's only one choice," Welch said.

The speech could be influential because Jesuit values are "widely shared if not always acted on by Jesuit educated members of Congress," Welch said. "If I were not in agreement it would cause me to question why I wasn't."

Sen. Tim Kaine (D-Virginia), Hillary Clinton’s running mate in the 2016 presidential election and a graduate of Jesuit-run Rockhurst High School in Kansas City, Missouri, also praised Sheeran's speech.  Kaine is a co-sponsor of the Senate's version of the Dream Act.

"I applaud the strong support given by Jesuit educators to Dreamers," he said in a statement emailed to NCR. "The support is consistent with Scripture and with American values as expressed in the Declaration of Independence and our subsequent history as a nation."

Rep. Rosa DeLauro (D-Connecticut), a co-sponsor of the Dream Act and a graduate of New York's Marymount College, which merged with Fordham University, said in a statement emailed to NCR that her Catholic faith is "rooted in the belief that we must care for the poor, the vulnerable and those who need protection. With those values in mind, it is essential that we fulfill our moral duty by protecting Dreamers from being deported."

Support for the Dream Act is not limited to Democrats. Sen. Richard Durbin (D-Illinois), a Georgetown University graduate who was one of the first to introduce a version of the Dream Act in 2001, thanked Republicans like Lisa Murkowski of Alaska for their support during the Oct. 25 press conference.

"We can't allow these young people to be taken out of school, ripped out of good lives and good opportunities because Congress cannot get its act together," Durbin said. "We have the beginning of a bipartisan coalition. There's no excuse. We need to get this job done."

Murkowski, also a Georgetown graduate, is a co-sponsor of the Dream Act and has worked with the Archdiocese of Anchorage to advocate for the bill.

Her communications director, Karina Petersen, said in an email to NCR that Murkowski "appreciates the unwavering support of the church, particularly the Catholic bishops, for the cause of the Dreamers. … Continued support from the faith community is essential to our success in Congress."

We do have control over our nation's politics