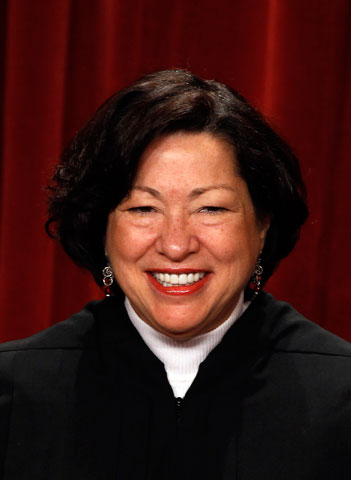 With one of its last acts of 2013, the Supreme Court gave Catholics a preview of what could be among its most anticipated decisions in 2014.

On Dec. 31, just before the clock struck the end of 2013, Justice Sonia Sotomayor temporarily halted the implementation of part of a federal mandate requiring coverage of contraceptive services in health care plans in response to a lawsuit by a group of Catholic sisters in Colorado.

Sotomayor's order concerned a mandate from the Department of Health and Human Services, issued as part of the Affordable Care Act, that contraceptive care, such as prescriptions for birth control pills, must be fully covered without copays as part of any insurance plan.

While some religious organizations are exempt from this rule or given an accommodation, a number of nonprofit Catholic groups say those exceptions are not enough. A number of for-profit businesses have also filed suit against the mandate, their owners saying it does not give them any protection for religious objections to the mandate.

Colorado's Little Sisters of the Poor argued in their complaint that while the mandate provides them accommodations from its requirements as a nonprofit church group, it also requires that they first sign papers indicating they are seeking such accommodation.

The act of signing those papers, the sisters' lawyers argued, would effectively be an act of cooperation with birth control as, under the Health and Human Services Department's exemption scheme, the government would then place the burden on providing contraceptive services to the sisters' insurers and not on the sisters themselves.

The Department of Justice responded to Sotomayor's order Jan. 3, saying that the sisters had "no legal basis" to make their claim.

The sisters are "not substantially burdened by the requirement that they sign the certification form expressing their religious objection to contraceptive coverage in order to exempt themselves from the contraceptive-coverage provision," the government argued.

In a 37-page brief from Solicitor General Donald Verrilli Jr., the Justice Department also stated that the sisters' lawyers created a "flawed analogy" by comparing the sisters' situation to those faced by Quakers who because of religious beliefs cannot join the military or Jewish prisoners who because of kosher laws cannot eat pork.

"The question in all of those cases would be whether the religious objector could be required to sign a certification form in order to secure the religion-based exemption he sought," Verrilli stated.

"When extending religious accommodations, the government must be allowed to provide for regularized, orderly means of permitting eligible individuals or entities to declare that they intend to take advantage of them," he stated.

The back-and-forth between the women religious and the Obama administration leaves it up to Sotomayor to pursue more findings on the sisters' case, seek to refer it to the full court, or drop her order. At press time Jan. 8, the justice had not yet taken action but could at any time.

Beyond the case of the sisters, the Supreme Court is expected to hear this spring or summer two cases by for-profit employers, a sampling of many that are challenging the mandate on separate grounds.

Some 91 other lawsuits from both nonprofit and for-profit groups objecting to the mandate are also working their way through courts across the country.

In a commentary for Religion News Service Jan. 6, the new head of the U.S. Conference of Catholic Bishops reiterated the bishops' objections to the mandate, saying it puts at jeopardy the ability of Catholics to "live out the fullness of our faith."

Louisville, Ky., Archbishop Joseph Kurtz, who took over as the president of the conference last November, quoted Pope Francis' call to serve "the least of these" in calling on President Barack Obama to lift possible fines faced by nonprofit groups who choose not to follow the mandate's exemption scheme.

"We know that the Constitution and the law protect us from heavy-handed government demands that we violate our consciences or pay crippling fines," wrote Kurtz.

"On behalf of those served by our schools, hospitals and social service ministries, we will continue to resist the burdens imposed by the HHS mandate," he continued. "We hope and pray that the administration and Congress will protect us from those burdens, and that the courts will uphold our freedom to serve those who depend on us."

Unlike the bishops, the Catholic Health Association, which describes itself as the largest group of nonprofit health care providers in the nation, has said accommodations the Obama administration has made for religious groups' concerns to the mandate are acceptable for its members.

According to the final version of the mandate, released last June, any organization that self-certifies as a nonprofit religious group with religious objections to contraceptive coverage can defer coverage of contraceptives to a separate health insurance issuer.

Those measures "will allow our ministries to continue offering health insurance plans for their employees as they have always done," Charity Sr. Carol Keehan, the association's president, said in a memorandum last July.

The Obama administration has not made any such accommodations for for-profit groups. Fees for noncompliance to the mandate went into effect Jan. 1, except for groups affected by Sotomayor's temporary order and other injunctions ordered by lower courts.

A version of this story appeared in the Jan 17-30, 2014 print issue under the headline: Justice's order temporarily halts HHS mandate.