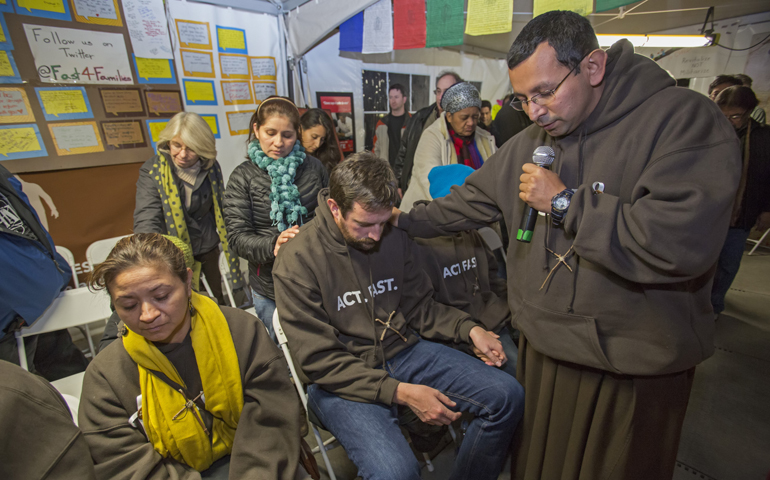 Franciscan Br. Juan Turios of Action Network prays Nov. 30 with immigration reform advocates taking part in Fast for Families in a tent on the National Mall near the U.S. Capitol in Washington. (CNS/Jim West)

From the interfaith clergy to the civil rights heroes, from the union activists and community organizers to one of the youngest members of Congress, those involved in an event Tuesday spanned the wide range of people working to keep Washington's attention on comprehensive immigration reform.

Marking the 22nd day of the Fast for Families, a prayer-and-fasting activity being observed around the country as well, four people who had consumed only water for 22 days broke their fast and symbolically handed over the role to others.

Crowded into the tents within sight of the Capitol where activists have maintained a vigil since early November, the simple observance featured a choir from a Silver Spring, Md., Catholic parish, a rousing call to pray and fast from the daughter of the Rev. Martin Luther King Jr., and testimony from a young African-American community organizer about her conversion to seeing immigration reform as a civil rights issue.

As a handful of members of Congress and Labor Secretary Tom Perez looked on, a procession of dozens of people who have been fasting for a few days approached the microphone and a small table with a round loaf of bread and a goblet of fruit juice.

Clad in brown hooded sweatshirts, the participants stretched across all age groups and a range of races and faiths. Led by Cardinal Theodore McCarrick, retired archbishop of Washington, the four 22-day fasters were led in, a couple looking noticeably frail.

Franciscan Fr. Jacek Orzechowski said after they broke their fasts with a small bit of bread and juice that he passed among them, they would be attended to by doctors who have been monitoring their health throughout their water-only fast.

They "turned over" the role as long-term fasters to seven others: the Rev. Jim Wallis of Sojourners; Philip Agnew and Ciara Taylor of Dream Defenders; the Rev. Eun-sang Lee, a board member of NAKASEC and pastor of First United Methodist Church in Salt Lake City; Stephan Bauman, president and CEO of World Relief; the Rev. Gabriel Salguero, president of the National Latino Evangelical Coalition; and Rep. Joe Kennedy, D-Mass., the grandson of Robert F. Kennedy, who was elected a year ago to his first term in Congress.

Each spoke about why they were taking on the fast. Lee said he was doing so as "a humble Christian and Methodist minister, a follower of Christ." In fluent Spanish learned as a Peace Corps volunteer in the Dominican Republic, Kennedy said he was participating in appreciation for the nation's immigrant history and for the many mentors and teachers who have been carrying on the fight for civil and immigrant rights for generations.

Taylor said just half a year ago, as "a black, nonimmigrant woman" working as a community organizer, she had no interest in immigration reform. While she said she's unfamiliar with being asked to show her immigration documents, she knows what it's like to be asked to show her driver's license while parked in her own driveway and to be judged by the color of her skin and the texture of her hair.

Before praying for the activists and the cause, McCarrick said he felt "the spirit of Pope Francis is very much here."

He prayed that the acts of those who are fasting and praying would "inspire our elected leaders to act" to protect migrants and all who remain at risk.

Across the country, thousands of individuals and groups have been joining in fasting and prayer. And a steady procession of supporters have visited the tent and prayed with fasters and others who have maintained a vigil daily.

Andres Chavez, the grandson of the late Cesar Chavez, joined the California fasters. Cesar was the founder of United Farm Workers and his weekslong fasts in pursuit of labor contracts for agriculture workers helped solidify the power of that union with peaceful activism.

Fasters affiliated with the UFW targeted Rep. Kevin McCarthy of California, the House Republican whip, calling on him to challenge House Speaker John Boehner to act on immigration reform.

Bishop Blase Cupich of Spokane, Wash., sent a letter to the fasters calling their efforts a "cause of great inspiration to me personally."

Students and faculty at 11 Catholic colleges were participating in the fast as well. And a letter of solidarity signed by leaders of nearly 20 Catholic institutions was released Tuesday.

"Your courageous example reminds us all that the issue of immigration reform is not about partisan politics or narrow ideological agendas," it said. "This is a profound moral issue, as old as the Hebrew prophets and the Gospel, that calls into question the kind of nation we aspire to pass on to our children."

Among the letter's signers were Fr. Larry Snyder, president of Catholic Charities USA; two former ambassadors to the Holy See; the presidents of several Catholic colleges or universities and representatives of the Leadership Conference of Women Religious; the Sisters of Mercy of the Americas; the Catholic social justice lobby NETWORK; the Sisters of the Good Shepherd; and the Ignatian Solidarity Network.

At the event in Washington, the Rev. Bernice King, daughter of the civil rights icon, recalled learning as a child that prayer and fasting can bring about great things. In a rousing mini-sermon, the Baptist minister decried any policies or laws that treat people differently based on their origins or skin color.

She noted that the successful civil rights movement of the 1960s started with a one-day boycott that stretched to many more peaceful types of protest before ultimately succeeding.