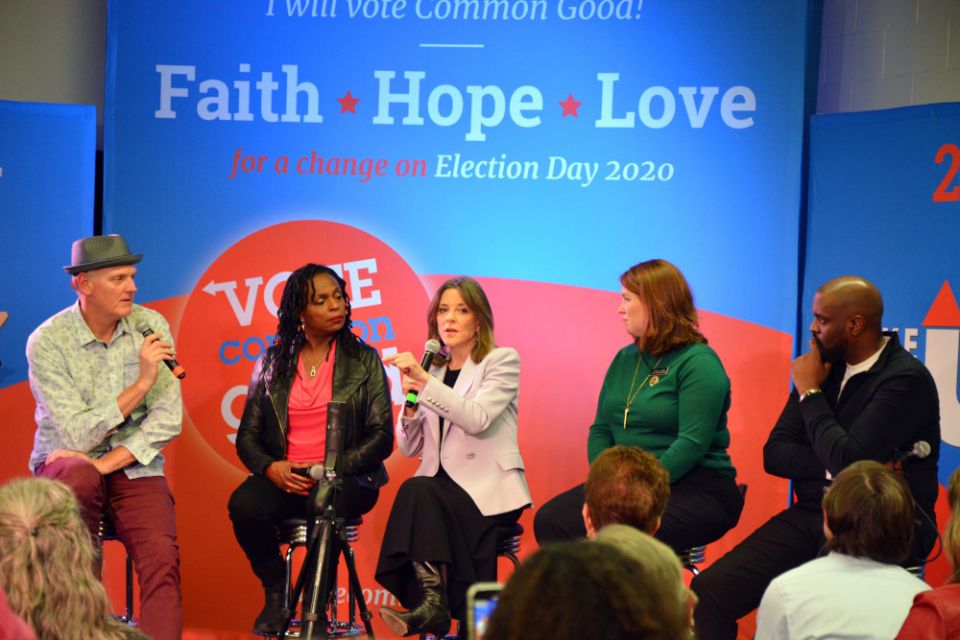 Des Moines, Iowa — Spiritual author Marianne Williamson has ended her campaign seeking the Democratic presidential nomination, saying that the experience challenged her faith but that she leaned on her spiritual beliefs for strength.

“I stayed in the race to take advantage of every possible effort to share our message,” Williamson said in her statement announcing the suspension of her campaign on Jan. 10. “With caucuses and primaries now about to begin, however, we will not be able to garner enough votes in the election to elevate our conversation any more than it is now. The primaries might be tightly contested among the top contenders, and I don’t want to get in the way of a progressive candidate winning any of them.”

Speaking to Religion News Service in Des Moines, Iowa, on Jan.9 evening, Williamson voiced frustration with critics who derided her candidacy as “anti-science” or “anti-medicine.” Williamson drew fire throughout 2019 for comments she made about health care, such as a 2012 radio show appearance in which she appeared to promote the unfounded theory that vaccinations can cause autism. Her campaign insisted at the time that her remarks were taken out of context and that she was “neutral” on the subject.

Williamson told RNS she was particularly frustrated by what she saw as criticism of her offering prayer and thought exercises for AIDS patients in the 1980s.

"We don't believe that because you pray with someone they're not supposed to go to the doctor," said Williamson, who is Jewish but espouses what she describes as a universal spirituality.

Asked if the experience of running for office tested her faith, she said the campaign was “trying,” but she drew inspiration from her spiritual beliefs.

“When people have an image of you that's been deliberately manufactured, moving through that takes spiritual fortitude,” Williamson said.

She also invoked “A Course in Miracles,” an esoteric 1976 religious work that she spent much of her career teaching others about.

“In ‘A Course in Miracles’ there is a line: ‘The Christ in you cannot be crucified,’” she said. “What that's saying is that the truth of who you are cannot be affected by lovelessness because you were not created to be the effect of lovelessness in yourself or in others. That means if I am identifying with the attacks on me, then, by definition, I am identifying with the false self.”

Williamson has utilized religious and spiritual language on the campaign trail and talked about faith during her final campaign event in Des Moines, Iowa, were she spoke at the Vote Common Good presidential forum organized by progressive people of faith.

Asked by VCG executive director and pastor Doug Pagitt how she viewed the intersection of religion and politics, Williamson called any disconnect between the two — particularly in liberal circles — “an aberration in American history.” She pointed to Martin Luther King Jr., President John F. Kennedy, Bobby Kennedy and the abolitionist movement as prominent historical examples where religious rhetoric or liberal ideals intersected.

“This disconnection from the spiritual and the religious is what is aberrational — when many of us are just wanting to reclaim the truly traditional American way,” she said. The crowd responded with applause.

She also had harsh words for the Democratic Party, which she described as too often uncomfortable with faith.

"The fact that the Democratic Party has made anyone of faith feel (like) 'You don't belong. ...' It is worse (than that): It's been, 'You're not smart enough,'" she said. "It's been arrogance. It's been elitist. I've experienced some of it myself with this campaign. I just think on a political level it's just unbelievably stupid. It's paternalistic, and who are they to say who gets to come into this room? People don't want to go where they feel uninvited."

Pagitt later told RNS that Williamson met with him by happenstance in Washington, D.C., a week before the event — the same day she announced that she was laying off all of her paid campaign staff. Pagitt, who is an evangelical Christian, said Williamson asked him for “pastoral advice” regarding whether she should continue her campaign with an all-volunteer staff. When he responded by saying that she should consider it, Williamson allegedly became emotional and asked if the Holy Spirit had asked the pastor to say that.

Williamson's campaign representatives did not immediately respond to requests to corroborate Pagitt's account.

Pope to young people: The Lord is always waiting for you

Reflective writing's call is to pay attention, to be awake and aware

Apps for phones, tablets aid in mental and spiritual health