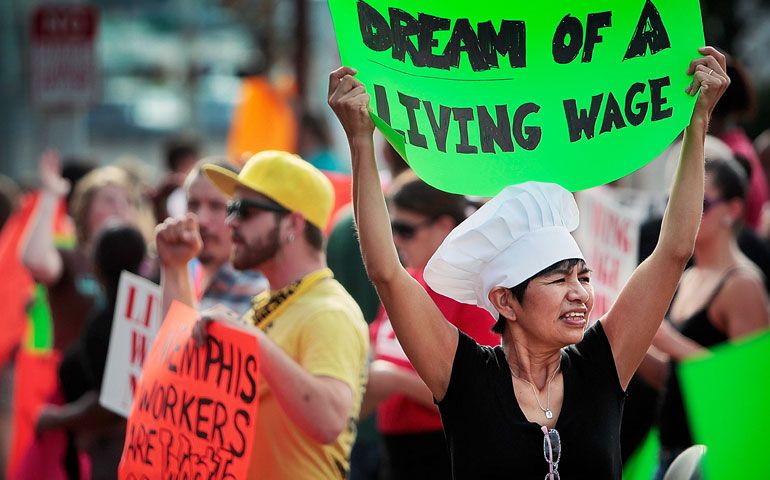 To follow the minimum wage debate as it plays out in America today is largely to witness a political data war.

Democrats point to reams of economic research in support of an increase from $7.25 to $10.10 an hour. Republicans, sometimes appealing to the very same data, contend that doing so would only force employers to shed more jobs.

Add to the mix the fact that key political players on both sides of the debate are Catholic -- with House Speaker John Boehner and House Budget Chairman Paul Ryan to the right, and Sen. Tom Harkin, who helped craft legislation in support of an increase, to the left -- and the situation becomes even more confusing.

But when the realities of modern economic markets and the instruction of Catholic social justice teaching are taken into consideration, church scholars and labor leaders say any talk of a "minimum" wage becomes a kind of moral understatement, a mere baby step where giant leaps are in order.

"The idea of the minimum wage is not necessarily a Catholic concept, but more of an American political one," said labor and immigration advocate Fr. Clete Kiley of Chicago. "We Catholics really want to stand for a living wage, and what we mean by that is enough money to support the family, to put some aside for your retirement, and to take care of your health care needs so you actually can live and get ahead."

Testifying before the U.S. Senate in June 2013, Bishop Stephen Blaire of Stockton, Calif., made the distinction between the minimum wage and what the Catechism of the Catholic Church calls a just wage. Blaire said it is a "scandal that the richest country in the world has allowed over 23 million children in working poor families to become the norm."

At a dollars-and-cents level, the difference is hardly insubstantial, as a living wage calculator out of the Massachusetts Institute of Technology shows. In San Francisco, a high-cost city with the highest minimum wage in the country, at $10.55 an hour, the calculator puts the living wage for a single adult with no children at $12.83. For one adult with a child, it's $26.03.

"The minimum wage is usually about 20 percent lower than a living wage," said Professor Amy Glasmeier, the creator of the calculator, which is geographically specific down to city and county levels. "In some places, the difference is much bigger than 20 percent."

Such distinctions come at a time when 21 states and a number of municipalities across the country have raised their minimum wage above the federal level. Meanwhile, income inequality has become a key concern for Catholics, with Pope Francis speaking out forcefully on the issue of economic justice and arguing, like Popes John Paul II and Benedict XVI before him, that government has a role to play in regulating markets.

"The fact is, people are working full time and are not able to pay rent," said Social Service Sr. Simone Campbell, executive director of NETWORK, a Catholic social justice lobby. "That's immoral. It's critical that reality takes precedence over ideas, as Pope Francis says in his exhortation, and that we look at real stories of real people, as opposed to our theories."

Today's debate over the minimum wage began in the spring of 2013 when fast-food workers walked off the job to protest low wages. The demonstrations have since been swamped by ideological theory and political jockeying.

The political debate has been shaped around President Barack Obama's executive order mandating that businesses under contract with the federal government pay employees $10.10 an hour, and the Harkin-Miller bill, which would raise the federal minimum wage to $10.10 an hour by 2015 and index it to inflation. Where Obama's executive order is limited in scope, GOP opposition to the Harkin-Miller bill, also known as the Fair Minimum Wage Act, makes its passage a near impossibility, according to many political observers.

In the past, Boehner has said he would rather "commit suicide" than vote on a minimum-wage increase.

Boehner has "always believed that it's a job killer," former congressman Steve LaTourette told The Hill, a political website, Feb. 21.

"I don't think there's any chance of seeing an increase in the federal minimum wage this year for one simple reason," said Bill Press, a political talk show host and former Catholic seminarian. "Republicans are convinced that most people with minimum wage jobs don't vote, and that those who do vote Democratic."

"They've just dug in their heels on this," he said.

The issue shows no signs of fading away. In America today, the current minimum wage is worth $2 less than it was in 1968 when adjusted for inflation. Nearly 4 million people work minimum-wage jobs, with another 16.7 million earning less than $10.10 an hour. Of those who would be affected by the Fair Minimum Wage Act, research from the Economic Policy Institute shows that more than half are women, nearly 90 percent are adults and roughly 25 percent are parents.

"There are all sorts of implications of low wages that we just don't think about," said Jesuit Fr. Fred Kammer, a researcher at the Jesuit Social Research Institute at Loyola University New Orleans, and former president of Catholic Charities USA. "When you're paying people minimum wage, they are spending it all on rent and food. When people don't get paid enough, they can't save, they have nothing for a rainy day. A health care bill will wipe them out. They become victims of predatory payday lending. You have nothing to pass on to the next generation."

"I tend to work nights," Kammer said, "and in all my jobs I've gotten to know the people who clean the offices. In most cases, they're holding a second job. ... What is the impact of that for single moms? Who's watching the children? Who's talking to kids? There's a lot of research now about how low-income children have less exposure to language than kids from middle and upper incomes, and there's a movement to get parents to talk more to their kids. But if they're always at work, they can't."

Which brings in the question of family life.

"In Catholic teaching, what's at stake is family security and family stability," said Tom Mulloy, a policy advisor for the Catholic Campaign for Human Development within the U.S. Conference of Catholic Bishops.

"Currently a full-time, full-year worker making the minimum wage cannot raise one child out of poverty," he said. "So if you're looking at the federal minimum wage through the lens of Catholic social teaching and the imperative to nurture families as the fundamental cell of society, it's not meeting that standard."

In addition to Blaire's remarks before the Senate, other Catholic leaders have spoken out on the issue. In January, Archbishop Thomas Wenski of Miami, current chairman of the Catholic Campaign for Human Development, and Fr. Larry Snyder, president of Catholic Charities USA, wrote an open letter to the U.S. Senate advocating a hike in the minimum wage. Last month, the bishops of Massachusetts called upon state lawmakers to do the same.

Still, some sense a degree of cognitive dissonance at play in the U.S. Catholic leadership's handling of social justice issues like the minimum wage, and wonder if the bishops' conference could try harder to court the public's attention, as it has done on the issue of religious freedom in recent years.

U.S. bishops have honored politicians hostile to increases in the minimum wage. Boehner gave a commencement address at the bishops' Catholic University of America in Washington in 2011. Ryan, whose budget proposals have been condemned by the bishops' conference, was in 2012 praised by then conference president Cardinal Timothy Dolan of New York as an "exemplary public servant." Ryan has since called raising the minimum wage "bad economics."

Fresher still on the mind, many U.S. Catholics cringed in the fall of 2013 when Catholic University's newly opened business school accepted a $1 million contribution from the libertarian Koch brothers, who have advocated eliminating the minimum wage altogether (NCR, Feb. 28-March 13).

John Carr, director of the Initiative on Catholic Social Thought and Public Life at Georgetown University, pinned the dissonance surrounding American Catholicism's role in the minimum wage debate to a "misuse of the idea of prudence" in public life -- the idea that "we all agree on principle, we just disagree on means." Carr argued further, "Polarization is so strong in our society that it has seeped into the ecclesial life."

"We've got people who sort of measure the teaching by how it measures up with their own ideological preferences instead of the other way around," he said. "There's a bit of a battle over what the teaching is, who owns it and what it calls for. Some people are turning themselves into pretzels saying, 'I'm fully consonant with Catholic teaching, but unions are outmoded, the living wage is counterproductive and the market is the moral way to go for society.' That's a great way to be a subscriber to Forbes magazine, but it isn't an expression of Catholic faith."

Kiley says some Catholics might try to split social teaching into camps around hot-button issues, but he doesn't see the distinctions.

"It's all connected," he said. "I see the living wage as a pro-life issue."

[Vinnie Rotondaro is a writer and editor living in Brooklyn, N.Y.]

A long history in Catholic teaching

The Catholic concept of a living wage, also known as a "just" wage -- or what John Paul II called a "family" wage -- was first articulated in an 1891 papal encyclical Rerum Novarum.

"Let the working man and the employer make free agreements, and in particular let them agree freely as to the wages," Pope Leo XIII wrote. "Nevertheless, there underlies a dictate of natural justice more imperious and ancient than any bargain between man and man, namely, that wages ought not to be insufficient to support a frugal and well-behaved wage-earner."

The Catechism of the Catholic Church defines a just wage as "the legitimate fruit of work."

"To refuse or withhold it can be a grave injustice," it states. "In determining fair pay both the needs and the contributions of each person must be taken into account."

Tom Mulloy of the Catholic Campaign for Human Development notes that the National Catholic Welfare Conference, now known as the U.S. Conference of Catholic Bishops, supported an increase in the U.S. federal minimum wage before the Fair Labor Standards Act established one in 1938. "The support from the Catholic bishops of the United States is clear and long-standing," he said.

"Of all the things that are part of the teaching on economic life," said Georgetown University's John Carr, "a just wage in some ways has the longest, deepest, clearest history."

Mary Poppins takes on Republicans in Funny or Die skit