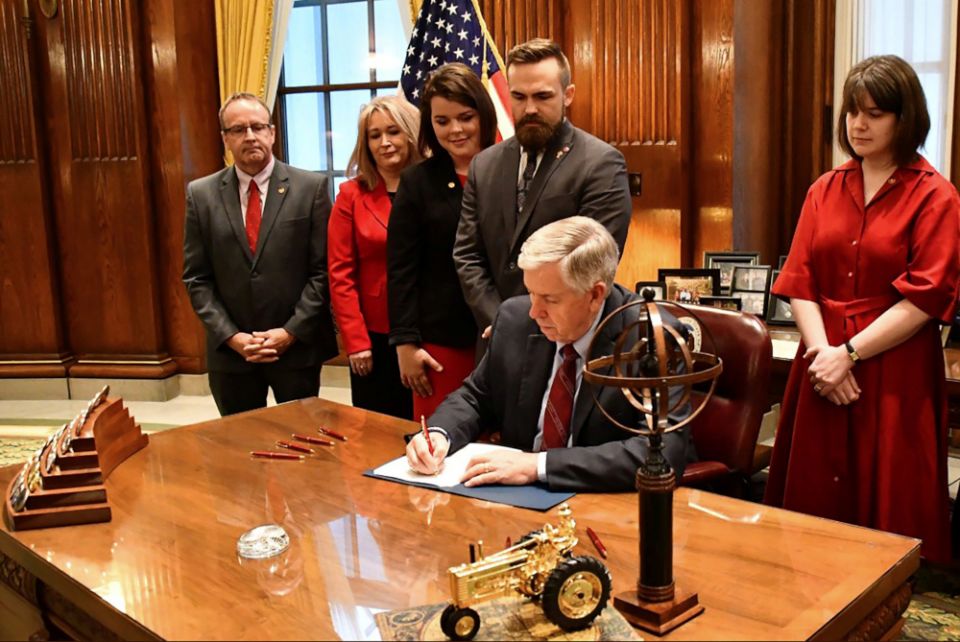 Missouri Gov. Mike Parson signs a bill into law banning abortion beginning in the eighth week of pregnancy, alongside state House and Senate members and pro-life coalition leaders at his office in Jefferson City May 24, 2019. Archbishop Joseph Naumann of Kansas City, Kan., chairman of the U.S. bishops' Committee on Pro-Life Activities, in a May 23 statement praised Missouri and other states for passing pro-life legislation in recent weeks. "Every single human life has value," he said. (CNS/Reuters/courtesy Office of the Governor handout)

Jefferson City, Mo. — With Missouri Gov. Mike Parson signing into law a bill that bans abortions on or beyond the eighth week of pregnancy, the state's lawmakers" have taken a giant step forward for the pro-life movement," said St. Louis Archbishop Robert Carlson.

"We need to continue to show persistence and determination in proclaiming a culture of life," he said in a statement May 24, the same day Parson signed the Missouri Stands for the Unborn Act.

"Know that the Archdiocese of St. Louis is committed to providing support, services and life sustaining education to women during and after pregnancy, especially those who may feel frightened, alone or are contemplating abortion," Carlson added.

Missouri's new law, set to take effect Aug. 28, provides an exception in cases of medical emergencies, but there are no exceptions for rape or incest. Doctors who perform abortions after eight weeks face five to 15 years in prison. There is no punishment for the mother.

The Missouri Catholic Conference, the public policy arm of the state's Catholic bishops, has noted the law also features many other pro-life provisions, including increased parental notification and informed consent provisions; a ban on abortions based on race, gender and Down syndrome diagnosis, "and an outright ban on abortion when Roe v. Wade is overturned."

On May 28, the American Civil Liberties Union of Missouri announced it will seek signatures to put a referendum on the 2020 ballot to repeal the new law. The organization has until Aug. 28 to gather 100,000 signatures to place the issue on the ballot for an up-or-down vote.

If the organization gets the needed signatures, the law will not take effect as scheduled and voters will decide its fate. A "yes" vote would mean the ban becomes law, while a "no" would mean it doesn’t.

Passage of the Missouri bill took place as the Alabama Legislature passed – and Republican Gov. Kay Ivey signed – a ban on abortion in nearly all circumstances. The law is set to take effect in November unless blocked by a judge. On May 24, the ACLU and Planned Parenthood filed a federal lawsuit to block it.

In Louisiana, Democratic Gov. John Bel Edwards is poised to sign a bill that would ban abortion after a fetal heartbeat is detected, which could be as early as early as six weeks of pregnancy. The measure is similar to laws passed in Kentucky, Mississippi, Georgia and Ohio. Two have already been temporarily blocked -- the Mississippi and Kentucky laws -- and the other two are expected to face legal challenges.

Meanwhile, a bipartisan majority of the Rhode Island Senate Judiciary Committee rejected a measure to expand abortion similar to New York's new law that allows abortion on demand through birth.

In a May 23 statement released in Washington, the chairman of the U.S. Conference of Catholic Bishops' Committee on Pro-Life Activities praised those states that have passed pro-life legislation but also emphasized that the Catholic Church stands ready to help all mothers, including those facing a crisis pregnancy.

"Every single human life has value. The trend of states passing pro-life legislation is a very encouraging move toward ensuring that our society cherishes unborn children and their most basic right to life," said Archbishop Joseph Naumann of Kansas City, Kansas.

"The pro-life movement has always had two critical goals: increasing support for mothers and children and eliminating the tragedy of abortion," he said. "Our march for justice and human rights for unborn children will not be complete until they are recognized and protected as persons by the law. Our ultimate objective, however, is for abortion to be unthinkable."

Naumann added: "As we celebrate these pro-life legislative victories, we reiterate our commitment to supporting all mothers with the care and resources they need. The church stands ready to help and welcome them."

Protecting the unborn in a 'throwaway culture'