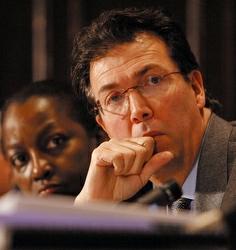 In their long history, the People of God have seen many captivities, both literal and figurative: the Babylonian Captivity; the Constantinian Captivity, the Carolingian Captivity, the Holy Roman Empire Captivity, the Avignon Captivity. In each of these situations, civil authorities captured God’s people and used them for their own advantage. One would think that history has seen enough of such “captivities,” and that the church, having learned from this history, would be wary of it ever happening again.

What then explains the current captivity, perhaps more figurative than literal, of the Catholic church in America by the Republican Party? This captivity was again in evidence earlier this month in Baltimore as the bishops met. The more vocal bishops were obviously unhappy with the election results, and some of the more extreme statements, such as prohibiting the vice president elect from a return to the town of his birth unless he changes his ways, sound like Republican ward heelers. How did this happen? Why are these bishops acting like functionaries of the Republican Party?

The answer lies in the difficult question of abortion. Roe v. Wade helped to shatter the Democratic coalition of northeast urban Catholics, southern Democrats, labor unions, the underprivileged, the discriminated against and other liberal-minded individuals. It put the Catholic church, and those who adhered to it, in conflict with a society whose most basic law now held that abortion could not, except in certain limited circumstances, be criminalized.

Republican Party operatives saw in this split a chance to capture the normally Democratic Catholic vote. Since Catholics form 25 percent of the vote in presidential elections, this was not an unimportant goal. In fact, the Catholic vote helped to elect quite a few Republicans in the last part of the 20th century and into the 21st.

What did it take? It took making empty Republican promises that they would appoint Supreme Court justices who would overturn Roe, this despite the fact that the majority of justices who wrote Roe in 1973 were themselves Republican appointees, as were a majority of those justices who wrote to affirm it in Planned Parenthood v. Casey in 1992. It also took empty Republican promises that they would alter the U.S. Constitution to protect human life. A human life amendment has been in every national Republican platform since 1980, and has never left Congress, despite the fact that the Republicans had majorities in the Senate, the House and controlled the presidency for a healthy chunk of the time from 1980 till the present.

It also took Republican control of the major right to life organizations in the country. Ever since Roe, every Catholic diocese has had a pro-life officer, every Catholic parish has been urged to form a pro-life committee. These are great people, trying their best to convert the country to the Catholic view on the sanctity of human life from conception till natural death. But they are understaffed and underpaid (as are all church workers) and when they receive blast-faxes and blast e-mails from the national right to life organizations, they are happy to have their work and research done for them, without questioning if it might be motivated by a partisan political motive. I will use only one illustration here. A featured speaker at the National Right to Life Organization’s 2008 convention was that well-known Republican agnostic, Karl Rove.

This helps to explain why some Catholic bishops have swallowed the Republican hokum. In the 2008 presidential election, the clearly implied endorsement by some bishops of the Republican ticket portrayed a mindset that there was only one way to confront the unspeakable evil of abortion -- the Republican legal strategy of overturning Roe. But this way has not worked in 35 years and it may never work, and while we remain fixated on it, we ignore other, more effective ways that have worked, such as providing adequate health care and income support to pregnant women so that abortion is not chosen as a tragic alternative to their pregnancies. Such proposals, however, are not in the Republican vocabulary.

But beyond this, this enthrallment with the Republican Party on the “legal solution” to the abortion issue has deprived these bishops of their prophetic voice on so many other issues. How often did we hear reports of Catholic bishops, during this last election, speaking out against the unjust war in Iraq, the secret prisons where America tortures her captives, the homeless in New Orleans and in Iraq, the lack of adequate health care for so many Americans; the possibility of innocent individuals executed by capital punishment; and above all, the evil of racism, an evil that has as many victims as abortion does? To be sure, some bishops did speak out on these issues, but they were drowned out by their colleagues for whom there was one and only one issue.

It does not have to be this way. Last spring, when Italy (where abortion is legal and state-subsidized) was having yet another national election, some politicians put together a list of “pro-life” candidates and asked for the church’s endorsement. The Italian bishops conference, in their magazine, Avvenire, was having no part of it. Their spokesperson said: “The initiative of a list on abortion, beyond its noble intent, mistakenly brings a moral theme to an electoral competition. It’s as if it were a list of ‘pure people,’ of ‘champions,’ of ‘specialists.’ It carries a grave risk of extremism, of ghettoization of one part of the Catholic world on such a sensitive issue.”

Would that all our American bishops were as wise.

Every time in the past that the People of God have been held captive by civil power, it has benefitted civil power and hurt God’s people. This time is no different. It is time to end the Republican captivity of our church so that, no longer enthralled to one political party, our bishops can recapture their entire prophetic voice.

(Nicholas P. Cafardi is a civil and canon lawyer, and a professor and former dean at Duquesne University School of Law in Pittsburgh. His most recent book, Before Dallas, examines the bishops’ failures in handling the clergy sex abuse crisis. The Duquesne reference is for identification purposes only.)

Engage Obama or fight him?

The collapse of the US bishops' conference