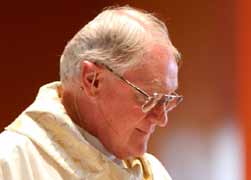 Auxiliary Bishop Thomas Curry of Los Angeles, 66, is chair of the U.S. Bishops’ Committee on Education, and thus likely to be a key player in discussions about the fallout from the University of Notre Dame’s controversial decision to invite President Barack Obama to deliver the commencement address and to award the president an honorary doctorate. Curry is also a distinguished intellectual with a special interest in church/state relations; he even operates a blog devoted to church/state issues at www.thomascurry.org. He sat down with NCR during the bishops’ spring meeting in San Antonio today to discuss the Notre Dame/Obama case.

Will there be any conversation about the Notre Dame/Obama controversy at this meeting?

We live in the middle of a society with which the church has very significant differences of opinion. We simply have to learn how to do that well, and it’s a learning experience all over again. The issues change, and our learning curve has to change. If I may go back to history, we had to do this with regard to living in a religiously pluralistic society. The church struggled with that for a hundred years or more, but we did come to live with it. We have to come to be able to do two things: to challenge people who differ drastically from us, but also to dialogue with them. There are great issues involved, and we have to make clear distinctions between endorsing something, challenging it, and engaging it.

It would be wonderful if we could have a decision that everyone would agree on, but I would doubt very much that everybody is going to come to a consensus at the moment. I would see it as a continuing discussion and exchange of views, and some of the views are very strong and passionate.

The bishops issued a 2004 statement which said that it’s inappropriate for Catholic institutions to honor someone who holds positions contrary to the teaching of the church. Do you think there’s a consensus among the bishops that what Notre Dame did is in violation of that policy, or is that part of what’s under discussion?

I think that’s part of what’s under discussion. Certainly there are very strong opinions that this is in violation of the policy, and perhaps it is. But I think there are also very strong opinions that we must continue to discuss this and work things out. He [Obama] is the president, and while we disagree with him on some things, we simply have to deal with people in public office. The question is, how do we do that? How do we both challenge them and also continue to discuss things with them?

Is this something your committee is likely to take up with regard to Catholic universities?

Yes, we’re in the process of discussing it. I can’t really say too much because we’re still in that process. This month, representatives of our committee will be meeting with some college presidents to discuss it, and at the moment I’m waiting for the response to that. We’ll meet before the November meeting and talk about it then. I don’t expect that we’re going to issue a policy at that stage, because I’m not sure we’re at a point where we could come up with something that would enjoy consensus.

Do you think controversies like what we saw at Notre Dame may happen again, without any stronger national policy?

The worst possible scenario would be that this is just the prologue to a more general controversy at the next graduation season. I would be a bit more optimistic. I think that the issues are going to continue, but perhaps more on a local level. I’m hopeful that it won’t develop into a complete polarization between the church and politicians, and that we can deal with specific issues in specific ways rather than the whole country getting involved.

Do you sense any push among the bishops for punitive measures against Notre Dame?

No, I don’t find any general consensus about that at all. Quite the contrary. I can’t speak for everybody, and certainly some people feel angry and betrayed, but I don’t find that that’s a consensus, either on our committee or among anyone else.

In fact, although it’s still in the preliminary stages and we haven’t made any decisions, but Notre Dame is very interested in Catholic schools, especially K-12, as is our committee, and we hope in the future that we’ll be cooperating with Notre Dame and other universities to support the schools. Sometimes if we can focus on issues like that, it can change the atmospherics, helping us remember that we’re all on the same side.

You’re confident that Notre Dame and the bishops are on the same side?

The question some would ask is, what’s the point of putting out statements like the one you did in 2004 if they can be ignored without any consequences?

That’s a good question, but first of all, I wouldn’t say there were no consequences. A very significant number of bishops objected fiercely to this, and Notre Dame has been very much in the forefront of criticism from many Catholic laity as well as bishops. I would say that there was a strong controversy.

The other point is that the 2004 statement is analogous to our statement on political activity before each election. It’s not a matter of faith and morals in the sense that we’re defining something. It’s a matter of how we react to a constantly moving situation in the country. I don’t think you can say, ‘Okay, we had a 2004 statement and that’s the end of it.’ No, the 2004 statement is a significant statement, it has to be taken into account, but we’re in a continual process of thinking and discernment about our relationship with the political situation, which is constantly changing.

You’re not in favor of new punitive measures for universities that don’t comply with the bishops’ policies?

I don’t think that would be useful.

Let me put it this way: I would anticipate that it would have been less controversial, because the honorary doctorate engaged the issue of the 2004 statement. A lot of people said that if they had come for the graduation but without giving him the honorary doctorate, it would have been different. Of course, I can see from the point of view of the university, they always give the commencement speaker a doctorate. Perhaps they could have done it differently. If so, it would not have been seen as engaging the 2004 statement about giving honors.

Are there circumstances you can envision when it would be appropriate to invite a pro-choice politician to speak at a Catholic university?

If one had an open forum, as part of a university exercise, with people on one side and on the other – with the university making clear where it stood, but giving a chance for dialogue between the points of view – I think that would be appropriate.

In other words, context makes the difference. Is that why you think an absolute policy probably won’t work?

I don’t see the policies as absolutes, but as guidelines. It would be best for this to be worked out between bishops and university presidents. Whether it’s the church or the national and international arena, it’s good if we can contain conflicts, and I think that would help to contain the conflict. Of course, it’s difficult to contain these things, because people like to get others to comment on them, but I think it would be better to deal with these things on the local level where possible, more than escalating everything to a national controversy.

Does that mean you don’t think there’s a need for a national policy?

No, I don’t mean that at all. I think we do need national guidelines. Otherwise, we’d just be 200 separate dioceses doing their own thing. We do need some consensus, we need to talk to each other, but my hope is that at least the controversy could be contained at the local level.

At some point, will the bishops revisit the 2004 statement?
t
I think we have to continually revisit it all the time, to see how things are changing. … We’re dealing with our relationship with the political issues in our country, which are constantly changing, and our way of engaging them has to change.

Will your committee, or the conference, need to look at ways to foster more regular dialogue with university presidents?

There was a forum for that exchange, but it got changed with the reorganization of the conference. There is a subcommittee under the Committee on Education, with someone from the ACCU [Association of Catholic Colleges and Universities.] … I think that’s something we need to look at more carefully, so that we have a broader context for discussion.

Do you think that will happen quickly, in the wake of the Notre Dame episode?

I doubt it … but it’s something we can continue to talk about.

Politics | 'No consensus' on follow-up to Notre Dame flap