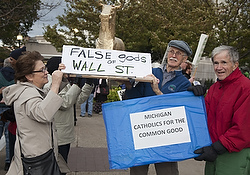 Activists show off a golden calf at the kick off for "Occupy Detroit" on Oct. 10. (CNS photo/Jim West)

Even as some pundits and politicos dismiss the Occupy Wall Street movement as a fleeting burst of activism from the far left, Cardinal Peter Turkson of the Vatican's Pontifical Council for Justice and Peace said last week that the "basic sentiment" behind the protests aligns with mainstream principles of Catholic social teaching on the economy.

"Wall Street is considered to be a big engine house -- a big financial structure whose power extends all over the world," the cardinal told Catholic News Service after the release of a new Vatican document that calls for more robust regulation and ethical grounding of the financial sector.

"People who suffer from the way the financial markets currently operate have a right to say, 'Do business differently. Look at the way you're doing business because this is not leading to our welfare and our good,'" he said.

This is the spirit animating Occupy Wall Street -- also called the "We are the 99 percent" movement -- that includes a significant presence from the faith community.

James Salt, executive director at Catholics United, and Rev. Jennifer Butler, executive director of Faith in Public Life, recently joined hundreds of people for an interfaith worship service at Judson Memorial Church in Manhattan, N.Y., to reflect on the condemnation of greed throughout Scripture.

A golden calf that Salt and other progressive religious activists built was carried at the front of a procession through lower Manhattan. The response in the streets and in the media has been powerful. Images of clergy carrying the golden calf have appeared on the front page of The Washington Post, in national news programs and even in the heady pages of that secular Bible, The New York Review of Books. People are responding to this timely critique of radical individualism and greed that has long been a centerpiece of the Catholic social tradition.

Even since Pope Leo XIII ushered in modern Catholic social teaching with an 1891 encyclical challenging the excesses of a savage capitalism that exploits workers for maximum profit, the Catholic Church has been on the frontlines of the struggle for economic fairness.

During the 1980s, when Ronald Reagan touted "trickle-down" economic theories that disproportionately benefited the richest 1 percent, Pope John Paul II warned against an "idolatry of the market" and insisted that private wealth was subject to a "social mortgage" to benefit the common good.

The U.S. Catholic bishops' 1986 pastoral letter, Economic Justice for All, called for an economy that serves the "dignity of the human person" and responded to the era's anti-tax orthodoxy (which remains a powerful force today with the tea party) by urging that "the tax system should be continually evaluated in terms of its impact on the poor."

Pope Benedict XVI denounced the "scandal of glaring inequalities" in his 2008 encyclical, Caritas in Veritate, and called for a more just distribution of wealth. And last week's Vatican document, widely covered in the U.S. media, spoke clearly about "the primacy of being over having," of "ethics over the economy" and of "embracing the logic of the global common good."

George Weigel and other conservative Catholic commentators who have arrogantly dismissed church teaching on economic justice and income inequality for years should dust off their copies of the Compendium of the Social Doctrine of the Church.

The compendium is clear that "the Church's social doctrine requires that ownership of goods be accessible to all." It points out that the church has "never recognized the right to private property as absolute and untouchable" -- insisting that a "universal destination of goods" is inextricably linked with a "preferential option for the poor."

As Jesuit Fr. Tom Reese of the Woodstock Theological Center at Georgetown University has frequently pointed out, the Vatican's consistent calls for a radical rethinking of global capitalism is far to the left of the most progressive Democrat in Congress. While this causes heartburn for those self-styled defenders of orthodoxy on the Catholic right who think they have a monopoly on Catholic identity, it just might be the kind of moral medicine we need today.

Fear may be preventing progress in our world

'Freedom to worship' vs. 'freedom of religion'

Archbishop warns of 'balkanization' in US church