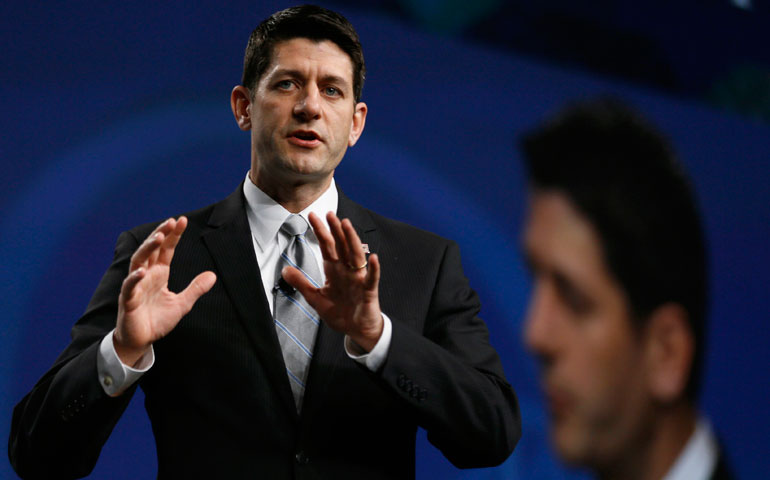 In late July, Wisconsin Congressman Paul Ryan unveiled a new anti-poverty plan. It calls for prison sentencing reform; a boost in the earned income tax credit for childless workers; and, most ambitious of all -- or crazy, depending on your political inclination -- an "Opportunity Grant," which would combine 10 of the federal government's largest anti-poverty efforts, including food stamps, and bring them down to state-level implementation.

Where the war on poverty -- a reference to legislation introduced by President Lyndon Johnson in 1964 -- "has failed," the potential 2016 GOP presidential candidate says, America "can do better." But, given Ryan's reputation for proposing budget cuts that slash aid for the poor, his about-face has left many scratching their heads, if not shaking them outright.

How should we understand the latest developments?

To begin with, political observers note, it's not just Ryan who is talking about opportunity and poverty. A number of potential GOP presidential candidates have been employing similar talking points.

But why the change in tone?

"It's a winning voting issue," said the Rev. David Beckmann, president of the advocacy group Bread for the World. "You can't take the White House in 2016 without addressing the problem of real economic suffering in the bottom half of the American population. ... What we learned from the last presidential election was that when Gov. [Mitt] Romney made those comments that dismissed the bottom 47 of the population, he lost those votes."

"But I think Ryan's speech and the six discussion papers are an important step forward," Beckmann said. "President Obama says that his top priority is opening up opportunity for all, and the fact that a number of the top leaders of the Republican Party are talking about poverty and opportunity -- it's a really important change in our public dialogue."

Indeed, in a July 24 speech at the American Enterprise Institute, Ryan said he would "like to start a conversation."

Which raises the question, where would such a conversation begin?

"I think overall Rep. Ryan's plan would exacerbate poverty and inequality, but there are threads of it [that] could be the basis for bipartisan conversation," said Melissa Boteach, a policy expert at the Center for American Progress. "One would be prison sentencing reform. ... The second would be the earned income tax credit for workers without children."

More intractable political differences begin to surface at the center of Ryan's plan, the Opportunity Grant.

"I think Ryan's a serious Catholic and I think Pope Francis has had some impact on him," said Social Service Sr. Simone Campbell, executive director of the Catholic lobbying group NETWORK. "But my problem is that [the Opportunity Grant] isn't a new solution. It's just a rehash of 1996 -- welfare reform redone."

At the same time, Ryan has been criticized for harboring "paternalistic" attitudes toward poor people. In explaining how the Opportunity Grant would work for an average American, for instance, Ryan said at American Enterprise Institute that there would be caseworkers, contracts and "benchmarks for success" that enrollees would have to meet, or face consequences.

More to the point, few think the Opportunity Grant would actually address the structural causes of poverty.

Robert Greenstein, the president of the Center on Budget and Policy Priorities has written: "While some other elements of the Ryan poverty plan deserve serious consideration, such as those relating to the Earned Income Tax Credit and criminal justice reform, his 'Opportunity Grant' would likely increase poverty and hardship, and is therefore ill-advised."

No one interviewed for this story believed the Opportunity Grant would address root causes -- jobs and wages don't adequately factor into his equation, they say.

Still, that shouldn't stop us from taking up Ryan on his invitation to dialogue, says Beckmann.

"This is a big deal for the faith community in particular," he said. "It's our chance to get the two parties talking together and to get compromises. It's an opportunity for Catholics and other people of conscience to urge our political leaders on both sides to work together to address the fact that a lot of Americans across the country are struggling just to feed their kids."

A version of this story appeared in the Aug 15-28, 2014 print issue under the headline: Ryan's plan signals GOP shift to opportunity-and-poverty talking points.