Pence defends Trump as a champion of Catholic values 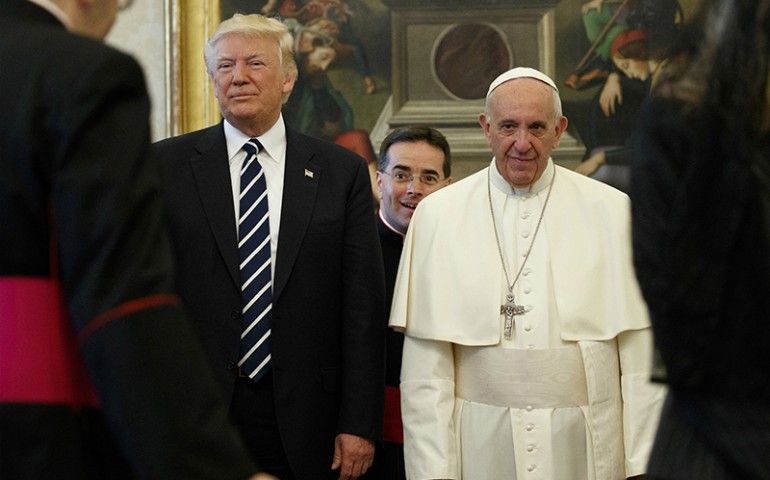 President Trump stands next to Pope Francis during a private audience at the Vatican on May 24, 2017. (Courtesy of Reuters/Evan Vucci/Pool)

Washington — Vice President Mike Pence — a onetime altar boy who became an evangelical Protestant — proclaimed President Trump a faithful supporter of Catholic values at the National Catholic Prayer Breakfast, an event that sought to set aside any friction between the president and the pope.

"Let me promise all of you, this administration hears you. This president stands with you," Pence said to the 1,300 gathered.

Pence's address at the annual breakfast June 6 took place less than two weeks after Pope Francis received Trump at the Vatican, and urged him — unsuccessfully — to keep the U.S. commitment to the Paris climate accords.

The pope and the thrice-divorced Trump have also clashed on immigration and refugees; during last year's presidential campaign, Francis even seemed to question whether Trump was a Christian.

But Pence told the breakfast crowd that Trump is a leader for the issues they care about most: protecting the unborn, religious freedom, and Christians suffering for their faith in the Middle East.

"Our administration is fully committed to bringing relief and comfort to believers in that ancient land, and under President Donald Trump, America will continue to condemn persecution of any faith in any place at any time. We will confront it with all of our might."

Terrorists, he added, seem to have "a special hatred for the followers of Christ."

On abortion, Pence said to extended applause: I couldn’t be more proud to serve as vice president to a president who stands without apology for the sanctity of human life. Since day one of this administration, President Donald Trump has been keeping his promise to stand for life, and life is winning in America again."

Pence, noted, among other policy changes, Trump's blocking of federal funds to nonprofits abroad that provide abortions, and his signing of a law that gives states the right to deny funding to Planned Parenthood, the women's health care nonprofit that provides abortions.

Trump's public position on abortion has changed over the years. He once supported abortion rights, but ran his presidential campaign fully in the anti-abortion camp.

For those conservative Catholics uncomfortable with Trump, Pence has provided a great deal of reassurance.

Abortion's foes tout Pence's unblemished voting record in Congress and as governor of Indiana on the issue.

In that state, he signed the Religion Freedom Restoration Act, a law that allowed businesses and individuals to refuse to do business with some people based on their own religious beliefs — such as the baker who didn't want to make a wedding cake for a gay couple. Pence signed a revised version of the law under pressure from major corporations, organizations and celebrities who vowed to boycott Indiana.

Some at the breakfast said the tension between the pope and Trump has been overplayed.

"Of course there are probably some differences in viewpoints, but we are one in the foundations," said Bernadette Michael, an American originally from London who said she is thrilled with the new administration’s support for the unborn.

"Now we have a voice again," she said, contrasting Trump and Pence to former President Obama, a staunch abortion-rights supporter.

The Catholic Church opposes abortion and same-sex marriage, though many American Catholics do not share the church’s position, particularly on gay marriage. Neither Pence nor other speakers raised the marriage issue at the breakfast.

Catholics split their votes in November between Republicans Trump and Pence and Democrats Hillary Clinton and Tim Kaine (whose views of his Catholicism aligned closely with Pope Francis’).

Older, conservative Catholics — and, judging by the applause when Pence invoked Trump  at the 13th National Catholic Prayer breakfast —  preferred the GOP ticket.

Younger and Hispanic Catholics sided with Clinton and Kaine.

Trump, who spoke at the larger National Prayer Breakfast in February, an event organized by evangelicals, had been invited to the Catholic breakfast. A spokeswoman for the event said organizers had not asked early enough to allow the president to fit it into his schedule.

But Pence, who spoke at length about his Catholic upbringing, was perhaps a better fit than Trump, who was raised a Presbyterian and embarrassed some at the National Prayer Breakfast by insulting Arnold Schwarzenegger.

Pence, who has called himself a "born-again, evangelical Catholic, joked at length about his eight years of "hard time" in Catholic school and how "the name Sr. Rachel still sends a shiver down my spine." He called his Catholic upbringing an "eternal foundation" and noted that he went to Mass with his mother "just last week."

"I  was not only baptized in the faith today but confirmed and I stand today before you as Michael Richard Christopher Pence," he said.

But Pence also refrained from calling himself a Catholic. Briefly, he noted, his faith journey had taken he and his family "in a different direction."

Pence is the first vice president to address the breakfast, though former President George W. Bush was a keynoter in each of the four years of his presidency.

Also keynoting the National Catholic Prayer breakfast, Archbishop Timothy Broglio of the Military Services USA and Mother Olga, a nun who lived through four wars in her native Iraq, and is now an American citizen.

The nun invoked the Mayflower pilgrims when she spoke of the promise of America, and advised Americans to speak up about their faith in the public square.

There is "a hesitation to speak about God, even in the simplest ways, such as saying 'God bless you' when somebody sneezes," she said. "We are afraid to have religious symbols in public offices or to talk publicly about religious values in our daily lives."

Politics | Pence defends Trump as a champion of Catholic values

What is the future of our health care?