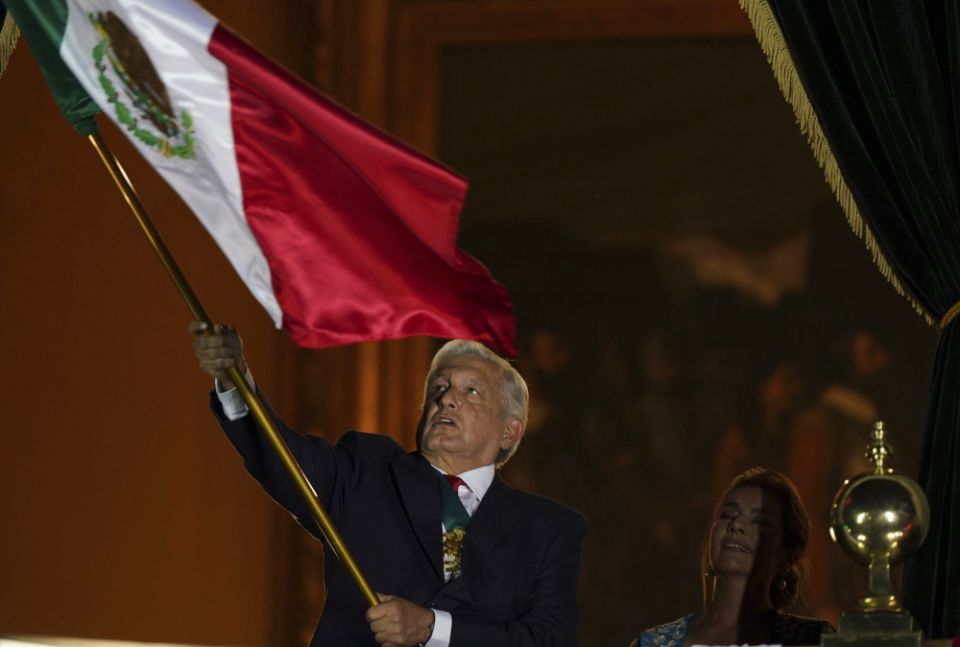 Mexican President Andres Manuel Lopez Obrador waves the national flag after giving the annual independence shout from the balcony of the National Palace to kick off subdued Independence Day celebrations amid the ongoing coronavirus pandemic, at the Zocalo in Mexico City, Wednesday, Sept. 15, 2021. (AP Photo/Fernando Llano)

The commemorations included a message from Pope Francis acknowledging the errors of the Roman Catholic Church in supporting the old order.

Most Mexicans celebrate the anniversary of the start of the battle for independence, Sept. 16, 1810. But in fact, that uprising was largely quelled by the Spanish and their local royalist allies, Mexico's elite at the time. Guerrilla fighters largely carried on the independence fight in the mountains of southern Mexico after 1815.

It wasn’t until a liberal government briefly came to power in Spain in 1820 that conservatives and royalists in Mexico City decided that independence was a better route. So they joined forces with the guerrilla fighters and rode into the capital on Sept. 27, 200 years ago, essentially ending the war.

Much like the independence victory in the United States, where the new nation was born with a mix of slave and free states, the strange alliance that won Mexico's freedom from Spain carried within it the seeds of a conflict that would have to be resolved in the following decades.

The liberals in Spain in 1820 wanted to limit the power of the king, threatening to do away with some privileges for the clergy and army that Mexico's elites enjoyed.

That led Agustín de Iturbide and other royalist officers to change sides and join the rebels they had previously fought, and form the joint army of "the three guarantees" that rode into Mexico City in 1821.

The three guarantees, or promises, were independence from Spain, the establishment of the Roman Catholic Church as the only one allowed in Mexico and the union of the former foes to end the fighting.

What the elites wanted — and continued to fight for until the 1860s — was a preservation of the old order, just without interference from liberal reformers in Spain. In fact, Iturbide was named emperor of newly independent Mexico and held that title until the presidency was established in 1823.

But that left unresolved conflicts over the enormous wealth and economic power of the church, and whether Mexico should have a king or not. Those conflicts would lead to Mexico's reform wars of the 1850s and the French invasion of the 1860s that set up the brief reign of Emperor Maximillian.

Prior to the confiscation of church landholdings in Mexico, the clergy controlled much of the land in perpetuity and were exempt from taxes, and conservatives tried to defend those privileges.

Pope Francis sent a message to Mexico bishops marking the occasion, saying it "necessarily includes a process of purifying memory, that is, to recognize the very painful errors committed in the past."

"For that reason, on several occasions, I and my predecessors have asked forgiveness for the social and personal sins that by commission or omission, did not contribute to evangelization," he wrote.

"But we do not evoke the pain of the past for its own sake, but rather to learn from it and take steps to heal the wounds and construct an open dialogue that respects differences and build a much-desired brotherhood, giving priority to the common welfare over private interests," the pope wrote.

That contrasted with Spain's position of refusing to apologize to Mexico for the brutality, deaths and exploitation of the colonial period.

How should bishops deal with Church Militant and renegade priests?