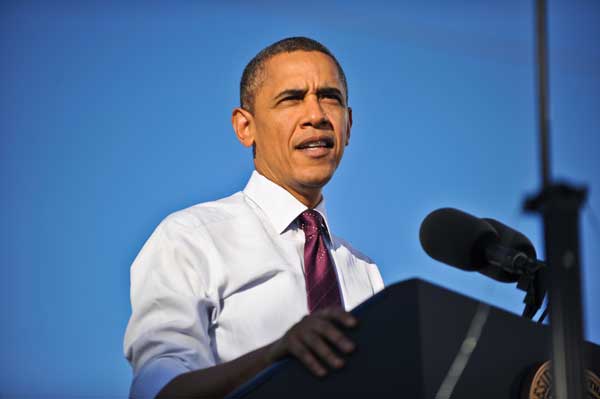 There aren't any white Protestants on the presidential ballot this year -- a first in American history.

Instead, the race features two Catholic candidates for vice president and a Mormon Republican and African-American mainline Protestant for president.

Perhaps lucky for all of them, voters care more about issues such as social justice or gay marriage than they do about denominational brands.

That's particularly true for Republican Mitt Romney and running mate Paul Ryan, who hope to woo evangelical voters that share their values rather than their theology.

It's a situation that probably would have baffled famous evangelicals such as the late Rev. Jerry Falwell, who used the issue of abortion in the 1970s and 1980s to turn evangelicals into a powerhouse voting bloc among Republicans.

"If you had told Jerry Falwell back in 1980 that by 2012 that there would not be a white Protestant on the ticket -- he would have died right there," said Shaun Casey, professor of Christian ethics at Wesley Theological Seminary in Washington.

But the same dynamic doesn't bother David French of Columbia, Tenn., a blogger at EvangelicalsforMitt.org. He wants a candidate who shares his values, not his theology.

The answer to all three of those questions is yes for Romney, he said, and that's more important than the fact that some evangelicals see Romney's Mormon beliefs as heretical.

He also said Americans in general no longer worry about denominational labels. French, for example, grew up attending a Church of Christ and now attends a conservative Presbyterian church. A Pew Forum study in 2008 found that 44 percent of Americans have changed faiths at least once.

"We are moving well past being obsessed with religious affiliation or denominational labels," he said.

Casey, however, said having a Mormon and Catholic on the ticket could be risky for Republicans because both groups have been seen as suspect in the past by evangelicals.

Casey, who worked on religious outreach for President Barack Obama's 2008 campaign, said the prospect of voting for a Mormon candidate could keep some evangelicals at home.

"I am not looking for a record evangelical turnout this time," said Casey, who wrote a book about the anti-Catholicism in 1960 that almost kept John F. Kennedy out of the White House.

According to CNN exit polls in 2008, about three-quarters of evangelicals voted for Arizona Sen. John McCain, the Republican nominee for president. During the election, McCain touted the fact that he attended a Baptist church.

A quarter voted for Obama, who joined a United Church of Christ in his 20s. Among the evangelicals who voted for Obama was John Lamb, a Southern Baptist from Nashville, Tenn. He plans to support Obama again. His main concern is immigration reform.

"I am dismayed at the lack of concern for the poor and for disenfranchised immigrants in this country," he said.

Lamb doubts denominational labels make much difference to voters. He points out that former presidents Jimmy Carter and Bill Clinton were Southern Baptists, and evangelicals opposed them both.

But it's not just the voters who downplay denominational identity.

A recent study of voting patterns in Congress found that legislators follow ideology and party affiliation, no matter what their religion.

Bill D'Antonio, a senior fellow at the Institute for Policy Research and Catholic Studies at the Catholic University of America, looked at roll call votes on abortion from 1977 to 2010.

After 1980, the pattern changed. Most Democrats became supportive of abortion rights, and most Republicans became anti-abortion.

In recent years, Democrats have tried to woo evangelical voters on the issue of social justice. That makes sense to Marcia Pally, author of "The New Evangelicals: Expanding the Vision of the Common Good."

"When the ordinary person in the pew starts working in a prison ministry program or food pantry, or goes to Haiti or Uganda and works to prevent malaria or build houses -- their priorities change," she said.

Still, Democrats' appeals to evangelicals have largely failed -- abortion is a big reason, Pally said -- and polls show that a growing number of evangelicals support Romney.

Robert Jones, president of the Washington-based Public Religion Research Institute, said evangelicals were skeptical about Romney at first. In October 2010, about 40 percent of evangelicals had a favorable view of the Republican candidate.

Once it became clear that Romney was Obama's opponent, that figure shot up to 68 percent, said Jones.

[Bob Smietana writes for USA Today and The (Nashville) Tennessean.]

Care for 'the least among us' should guide Congress

Iowa Medicaid reimbursements will no longer go to abortion providers