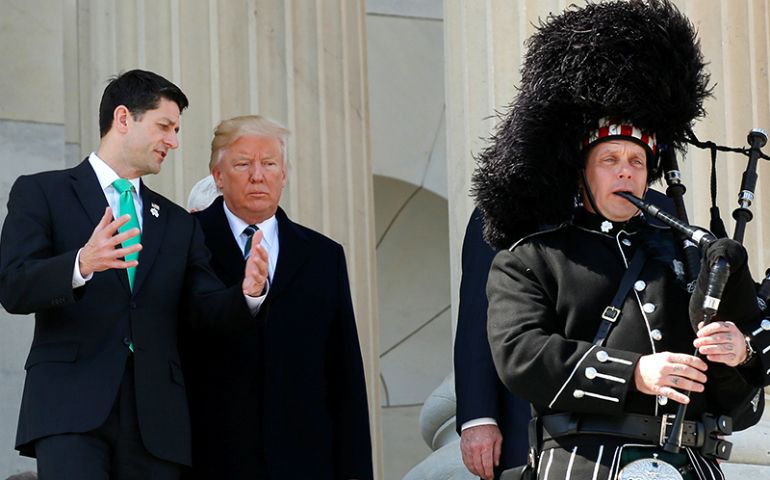 Speaker of the House Paul Ryan, left, and U.S. President Donald Trump follow a piper down the steps after they attended the annual Friends of Ireland St. Patrick’s Day lunch at the U.S. Capitol in Washington, D.C., March 16. (Reuters/Kevin Lamarque)

Washington — Religious leaders, including some who spoke at President Trump’s inauguration, are calling on Congress to protect foreign aid that helps the needy across the globe.

Trump’s 2018 budget proposal calls for $25.6 billion in funding for the State Department and the U.S. Agency for International Development. That's a decrease of $10.1 billion, or 28 percent, from the 2017 budget.

“As people of faith, we cannot turn our back on those in desperate need,” more than 100 Christian leaders wrote in a letter to House and Senate officials and posted March 16 on the website of World Vision. “As followers of Christ, it is our moral responsibility to urge you to support and protect the International Affairs Budget, and avoid disproportionate cuts to these vital programs.”

The letter said the current level of  foreign assistance, which makes up 1 percent of the overall budget, has sharply cut the number of people living in extreme poverty and reduced the spread of infectious diseases such as Ebola and HIV/AIDS. The letter said the funding has also served to protect religious freedom for millions.

In his budget proposal released Thursday, Trump said, "It is time to prioritize the security and well-being of Americans, and to ask the rest of the world to step up and pay its fair share."

“We appreciate that the President wishes to run a fiscally responsible government,” said Rich Stearns, president of World Vision U.S., in a statement. “But cutting such a small part of the federal budget — especially at a time when the world is so unstable and volatile — seems penny wise and pound foolish.”

Leaders of other religious groups, including American Jewish World Service, have also expressed concern about the budget proposal.

“We call on members of the U.S. Congress to oppose this budget,” said AJWS President and CEO Robert Bank, “and we call on American Jews and all Americans who are guided by the value of upholding the dignity of every person to oppose President Trump’s proposed radical cuts to the budget.”

To impeach or not impeach