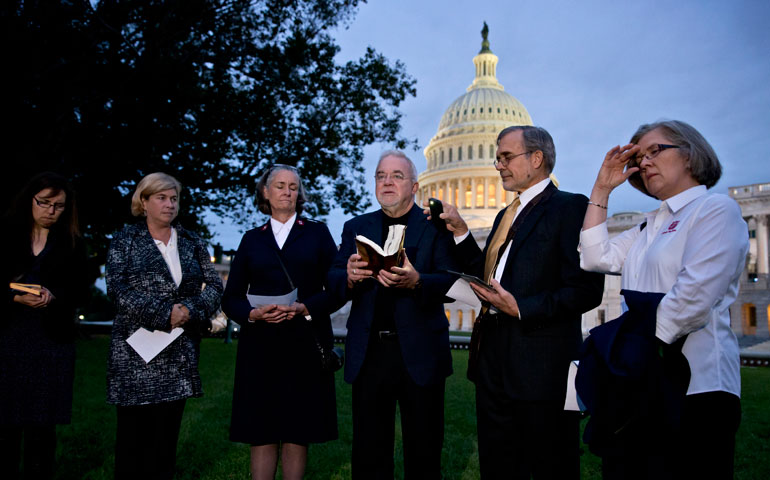 Washington's version of the 1993 movie "Groundhog Day" is again showing in the theater that has become Congress: Budget negotiations are underway again. In that iconic movie, a weatherman, played by Bill Murray, is doomed to repeat the day he dreads, over and over again. But, in the movie, Murray finally decides to set aside his hatred of the event, and use the repeated days to learn more about the town, befriend its citizens, and fall in love with his news producer, played by Andie MacDowell. Finally, his love for her breaks the spell and at movie's end, Murray wakes to a new day. In the Washington budget version of the drama, there is no Andie MacDowell.

The immediate deadline was Dec. 13. Negotiators Rep. Paul Ryan, R-Wis., and Sen. Patty Murray, D-Wash., have reached a small deal to keep the government open, limit the sequester, and trim the deficit by a mere $2.2 billion a year. The deal may be a welcome departure from previous meltdowns, but it does not address any of the real budget problems facing the country. It is a compromise to be sure, but a small one.

That Dec. 13 deadline was the date set for a deal during the last round of budget negotiations in October. The October date for a deal had been set last January, during those budget negotiations. Each time, Congress, unable to reach anything approaching a true compromise, kicks the can down the road. The only thing both sides can agree to is that something must be done: The national debt is now just above $17 trillion. Republicans fear the deadening effect such debt levels have on the economy and Democrats worry about what budget crunches of the future might mean for core programs like Social Security.

There are two outstanding impediments to a substantial budget deal, both of them structural. The key demographic fact is obvious: Americans are living longer and their health care costs are rising, especially in their later years. So, the long-term solvency of programs like Social Security and Medicare are in doubt. Making those programs solvent will require some combination of higher taxes and/or lower benefits. Which leads to the second structural problem, the political problem: Republicans refuse to raise taxes and Democrats refuse to cut benefits.

The outlines of a so-called "grand bargain" have been clear for years, most obviously in the bipartisan Bowles-Simpson Commission proposals released in 2010. Whatever one thinks of their particular solutions, Bowles-Simpson focused on long-term debt. But Bowles-Simpson required both sides to take on their sacred cows.

The grand bargain for resolving the budget impasse depends on compromise across the partisan aisle in Congress," said Stephen Schneck, director of The Catholic University of America's Institute for Policy Research & Catholic Studies. "The GOP wants Democrats even to support cuts to growth in important safety-net programs like Medicare and Social Security. That will risk angering the Democratic base. If the GOP wants cuts to programs like those, they will need to show their willingness to stand up to their own base and bring a tax increase or other new revenue to the table."

John Carr, longtime policy adviser to the U.S. Conference of Catholic Bishops and now leading the Initiative on Catholic Social Thought in Public Life at Georgetown University, sees the failure to reach a budget deal as part of a wider political meltdown.

"Washington is demoralized," Carr said. "It can't pass a budget, vote on immigration reform or launch a health care website. More fundamentally, it has lost its moral compass, cutting food stamps for hungry families instead of subsidies for rich farmers. The administration waives the employer mandate, reinstates substandard health plans, but insists that the [Health and Human Services] contraception mandate move forward."

In 2011, while still at the bishops' conference, Carr led the effort to bring religious leaders together, founding the "Circle of Protection," which aimed to protect antipoverty programs from budget cuts. Later that year, when Congress set another target for a budget deal, it provided a stick to prod lawmakers: the sequester, a series of across-the-board budget cuts set to take effect if Congress failed to reach a deal. Carr and his religious allies succeeded in getting Congress and the White House to exempt critical antipoverty programs like Medicaid and the Supplemental Nutrition Assistance Program (SNAP) from the sequestration cuts.

Now, Carr is worried about those programs again.

"The bishops' conference and the Circle of Protection have limited the damage, but they can't change the misplaced priorities and poisonous culture of Washington," he said. "The Republican House is held hostage not only by its refusal to consider additional revenues, but more fundamentally, by a faction that disdains compromise or cooperation for the common good and opposes government's role as a matter of principle. They view collaboration as betrayal."

Schneck concurs in this grim assessment. "The poisonous atmosphere in Congress is working against the most vulnerable and neediest Americans -- against poor children especially," he said. "The poor and vulnerable do not have well-heeled lobbyists with campaign dollars. Poor children, too many members of Congress seem to realize, cannot vote. I fear that the final outcome of current efforts to resolve the budget will inevitably come at the expense of those Americans who are least able to take the hit. Shame on us all if we allow that to happen."

The irony in all this is that SNAP and Medicaid and other antipoverty programs are not causing the long-term debt problem. Discretionary spending is coming down after its post-recession highs. Both parties use differing statistics to muddy the debate. The Republicans warn about the costs of the Affordable Care Act, even though that law will actually help cut government spending by reducing health care costs over the long haul. Democrats brag that the government's deficit is dropping at a historic rate, even though much of the drop comes from the fact that the 2009 stimulus bill has run its course and the improvement in the economy has resulted in fewer applications for unemployment insurance and other programs that helped people weather the recession.

The new compromise is a good thing but it is really just another short-term fix. The outstanding issue of long-term entitlement programs will not be addressed. It's Groundhog Day again in Washington, and we are all Bill Murray.