The March for Our Lives changed me 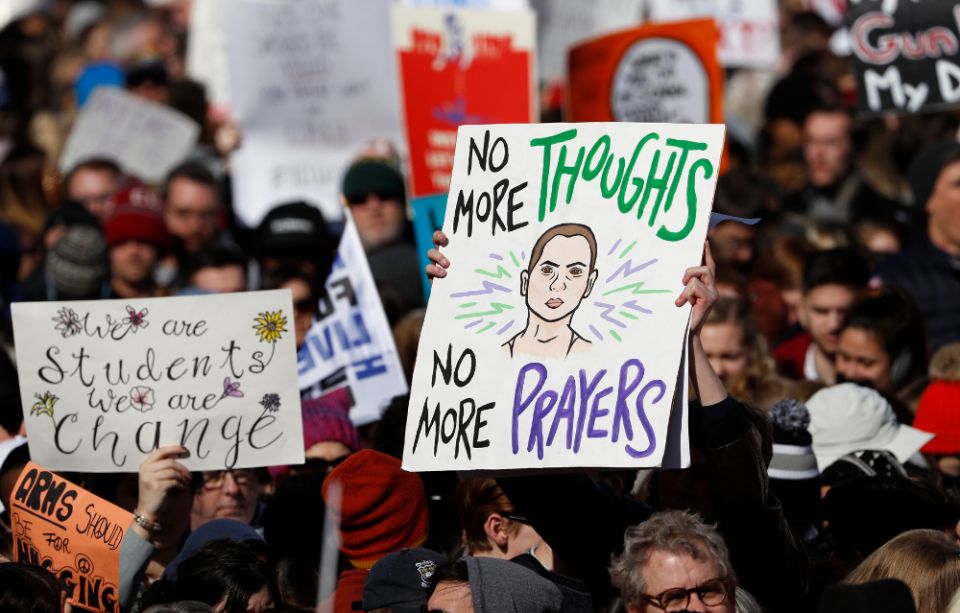 Students and other advocates hold signs during the March for Our Lives event March 24 in Washington. Hundreds of thousands converged on the nation's capital demanding gun control after recent school shootings. (CNS/Reuters/Aaron P. Bernstein)

On March 24, millions of folks went to the March for Our Lives in Washington, D.C., in response to the Marjory Stoneman Douglas High School shooting in Parkland, Florida. So did my husband, Paul, and I.

We did it for different reasons. Paul looked back at what he had done 50 years ago and wished he had been more public on the issues then. "This time I want to be on the right side of history."

I went because Emma González's words after the shooting moved me, and for my two grandsons who both feel like part of the school shooting generation.

It was the Saturday before Palm Sunday, so I had a "Jesus Christ Superstar" song in my ears: "Hosanna, Hey Sanna Sanna Sanna … Hey JC, JC, won't you smile at me?"

I listened to the kids on stage as they spoke to our souls. My God, I thought, they are "witnessing." Nothing stirs the soul more than someone witnessing.

These boys and girls, ranging from age 9 to 18, witnessed about the excruciating pain that comes from losing a sibling or a friend to gun violence, the constant fear of being the next one, and the never-ending stress that comes from having gone through it. "I learned to duck bullets before I learned how to read," one girl told us.

My "Puerto Rican" heart jumped with joy when the young Edna Chavez, from South Los Angeles, opened her speech in Spanish. She talked to us, in English, of her brother's death. She finished with a "La lucha sigue." Yes, child, the fight will go on, I thought.

I was touched by the young black boy who was profound about what it means to lose a big brother to gunfire. Or the young black girl who grieved beautiful dead sisters nobody else talks about, and the promise of their lives cut short.

Martin Luther King's granddaughter Yolanda Renee King, very young, charmed me as she asked us to repeat the words that she wanted us to say with passion, repeat them till we said them right: "Have you heard? All across the nation … we … are going to be … a great generation!"

Or, when asked to sing happy birthday for what would have been Nicholas Dworet's 18th birthday, tears came before the words.

Finally, González had the whole Pennsylvania Avenue silenced for the six minutes and 20 seconds that it took the killer to mow down 17 lives. That's a long time.

The witnessing didn't come only from high schoolers, but also from those confronted by daily violence in their neighborhoods and their homes. I heard them loud and clear. I am just not sure how I, a white grandmother, can come to the rescue to help their world be a safer place. But I heard them. They made sense to me, and I'm pretty sure they made sense to each person listening to them that day.

Finally, I saw a poster professing, "F--- your prayers." I can't say I feel comfortable with the words, but I understand the feeling behind them. What's the point of prayers without actions?

Back home, I fell asleep still hearing their voices. Days later, their voices are still ringing in my ears. And I'm glad they still do, because their voices, their stories, will help me keep the momentum going.

I have been to three marches in the past two years. The March for Our Lives in D.C. differed from the others. It changed me. We didn't chant our frustration at the status quo as we walked along Pennsylvania Avenue; instead, we stood still and listened.

This was the difference: We listened to young voices, sharing their anger, anguish, sorrow, loathing, trauma at what we're all allowing to happen again and again in elementary, middle and high schools around the country, in the streets of our inner cities, and in the quiet of family homes — deaths by gun.

We listened to them, we wept with them, we sang happy birthday with them — and we heard them. Finally, what the Sandy Hook parents worked so hard to achieve, their children's survivors may be able to do.

They made up such a young, diverse, colorful, beautiful crowd, each voice differing in age, gender, color, race, income. Each vibrant story rang true, and sounded sadly similar. They have shed too many tears already; they have mourned too many siblings and friends.

They addressed their own generation, again and again, whether they came from an affluent or a struggling community. "Arm yourselves with pens. Register, educate yourselves, vote."

Each sounded bright, wise beyond her or his age, articulate in ways that I could not remember ever being. They made me proud of their generation. They are the true heirs of the Founding Fathers and Mothers.

They were talking to their own, but we the older crowd heard their plea. "Don't just stand there, do something!" They believe in a democracy that so many of us adults have given up on. Their appeals were repeatedly nonviolent. Guns are death: "Choose life," one said. Martin Luther King Jr.'s spirit was hovering over the crowds throughout the rally.

Frankly, it was the best sermon I could have heard during Lent. Repent and redeem yourselves. Act. Help us make the world a better place. Now.

[Claire Bangasser is a cancer survivor and Catholic feminist who finds comfort on the margins. She has not blogged in a while and finds her favorite praying place in the subway. Watching people, she says, is where she finds God.]

Column | The March for Our Lives changed me

Catholic schools a faithful presence at Cleveland March for Our Lives

March for Our Lives: Impressive students may change US forever