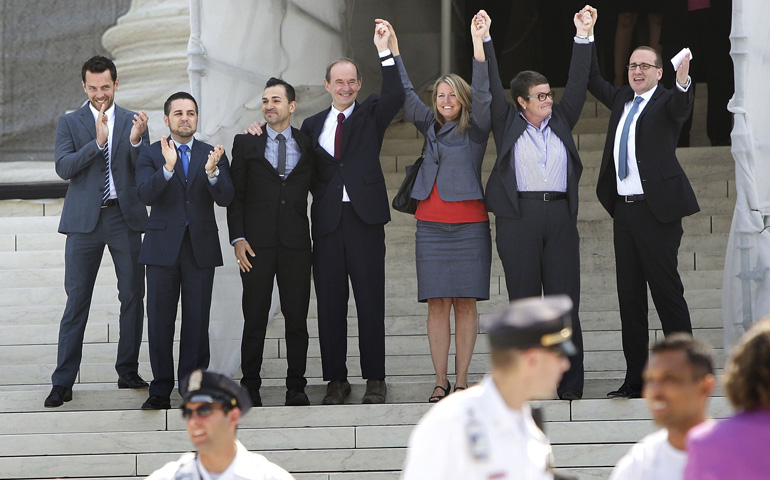 Attorney David Boies, left, stands with Jeff Zarrillo, second from left, Paul Katami, third from left, Sandy Stier, third from right, and Kris Perry, second from right, on the steps of the U.S. Supreme Court with supporters on Wednesday. Boies was lead attorney and the others were the four plaintiffs who challenged California's Proposition 8, the voter-approved initiative barring same-sex marriage. (CNS/Reuters/Jonathan Ernst)

Two days after dual U.S. Supreme Court decisions scored victories for gay rights, celebration (and dejection for proponents of traditional marriage) shifts to untangling what each means, who is impacted and what legal course is next.

The Supreme Court ruled Wednesday that Section 3 of the Defense of Marriage Act, which defined marriage for federal purposes as between one man and one woman, was unconstitutional, and that proponents of California's Proposition 8 lacked standing to challenge a federal court's 2010 ruling striking the referendum down.

Those separate 5-4 decisions did three things:

How those rulings are enacted is less straightforward.

The court's decision on the Defense of Marriage Act, or DOMA, extends federal benefits and obligations to gay couples in states where same-sex marriage is legal. For now, that count is at 12 states and Washington, D.C., and will bump to 13 once California re-establishes its law. The federal statutes affected include Social Security, tax returns, health insurance deductibles and marital exemptions from estate taxes, as in the case of Edith Windsor, the 83-year-old widow whose case -- Windsor v. United States -- advanced to the Supreme Court.

For married same-sex couples outside those states, it remains less certain how the federal benefits will apply and whether or not restrictions on them will exist.

The DOMA ruling "doesn't speak to what happens once an individual migrates to another state where it's not recognized," Bradley Joondeph, a constitutional law professor at Santa Clara University, told NCR Wednesday.

Part of the problem stems from no overarching policy for federal agencies and programs when it comes to defining marriage and determining what variations it recognizes for purposes of federal benefits and obligations. Some federal programs already have precedents established from previous cases, such as a common-law marriage or one between first cousins, but not all do.

The job of sorting through all those technicalities falls to the Obama administration. The president noted in his statement on the Supreme Court rulings that he had directed Attorney General Eric Holder to work with Cabinet members in reviewing all marriage references -- more than 1,300 -- in federal statutes.

"It's just going to take a lot of administrative thinking to figure out exactly how to make the administration of federal law more equitable," said Jennifer Mason McAward, a law professor at the University of Notre Dame.

"Federal officials are going to have to go through and see for each of those programs whether the state of residence is the state that the federal government defers to or whether the state of celebration, where the marriage occurred, is also recognized," said Nan Hunter, a professor of law at the Georgetown Law Center, where she studies constitutional law and state regulation of sexuality and gender.

"As a practical matter, that's going to make a big difference," she said.

Couples who went out of state to wed could find it more difficult to have their marriages recognized than those who were residents of one of the states with lawful same-sex marriage at the time of their nuptials then moved to a state without the recognition.

"I think it's safe to say that so long as that couple's marriage remains recognized as legal under state law in the state in which they reside, the federal government must respect that. But it doesn't speak to what happens once an individual migrates to another state where it's not recognized," Joondeph said.

What could also help clarify the situation is another piece of DOMA. Section 2 of the 1996 law addresses a state's right to not recognize a valid same-sex marriage from another state.

"[It] tells Arizona that it doesn't have to recognize the California marriage license," Joondeph said, "and so part of the question is discretionary -- will the administration choose, for purposes of federal law, to recognize that marriage is valid? Another part of it is: Is it legal for Arizona to decide not to recognize California's law?"

For now, the U.S.'s most populous state is prepped to again issue marriage licenses to gay couples, though it won't happen immediately.

Petitioners have 25 days after a ruling to request that the Supreme Court rehear a case. Once that period expires (which in this case would be near the end of July), California's Ninth Circuit Court of Appeals could implement the Supreme Court's orders and dissolve the stay on the federal court's decision that Proposition 8 was unconstitutional.

California Gov. Jerry Brown has directed the state's public health department to inform counties that the district court's injunction against Proposition 8 applied statewide, and they should resume issuing licenses once the stay is lifted.

[Update: The Ninth Circuit Court of Appeals lifted the stay Friday afternoon, allowing same-sex marriage licenses to be issued immediately. Local media reported the plaintiffs in the Supreme Court case -- Hollingsworth v. Perry -- were the first in line to be married, with state Attorney General Kamala Harris expected to officiate the ceremony.]

Given that the Supreme Court ruled that only government officials could appeal the federal court's ruling, it would seem the Proposition 8 battle has reached its end, but legal experts say grounds exist for the referendum to re-emerge.

One possible avenue could come from a county opposed to same-sex marriage whose county clerk could accuse the governor's order of violating state law.

"And that would again bring into question whether Proposition 8 is valid as a matter of federal law, not to mention whether the government's order is an appropriate exercise of the governor's discretion under California law," Joondeph said.

As in California, the nationwide fight over marriage is likely to continue to play out at the state level. Equality advocates could challenge state bans through federal courts or use limitations on married same-sex couples' access to federal benefits in those jurisdictions to further test the law. Pushes for legislation in some states are also expected.

Whatever the strategy, few believe the Supreme Court rulings put an end to the debate.