Supreme Court's decision on marriage called a win for love, 'a tragic error' 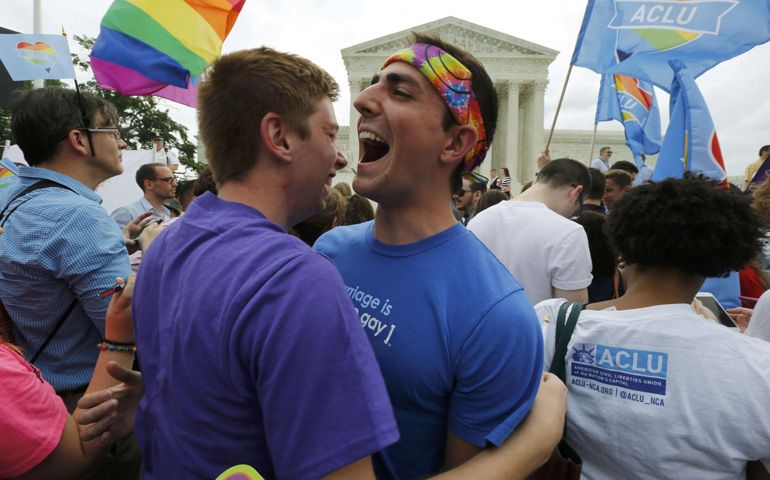 Supporters of same-sex marriage celebrate outside the U.S. Supreme Court building Friday in Washington after the justices ruled in a 5-4 decision that the U.S. Constitution gives same-sex couples the right to marry. (CNS/Reuters/Jim Bourg)

Political and religious response to the Supreme Court's ruling on same-sex marriage ran the gamut Friday, from despair and anger to outright jubilation.

It is now a constitutional right for same-sex couples to be married throughout the United States.

"Today, love prevailed and our nation became a more perfect union by affirming that all people are indeed created equal and justice belongs to everyone," wrote Sarah Kate Ellis, president and CEO of GLAAD, a gay and lesbian anti-defamation group, in a statement.

"Gay and lesbian couples now have the right to marry, just like anyone else," President Barack Obama tweeted. "#LoveWins."

And from the Twitter page of presidential candidate Martin O'Malley: "There's no greater human right than love."

Arthur Fitzmaurice, resource director for the Catholic Association for Lesbian and Gay Ministries, told NCR he hopes that "now that it is the law of the land, it is going to continue to provide space for people in same-sex relationships to tell their stories. In the time ahead there is a chance for us to step away from the charged political debate to a pastoral dialogue on what it means to be LGBT and Catholic."

"I think that while the law has changed, people's hearts and minds are not going to change until they see same-sex marriage in practice," said Francis DeBernardo, executive director of New Ways Ministry, a Maryland-based Catholic group that promotes LGBT rights and has supported same-sex marriage. "That is the significance of this. It paves the way for people in parts of the country where marriage equality doesn't exist to see the benefits of same-sex marriage and that it's nothing to fear."

DeBernardo said he believes that if same-sex couples are permitted to marry and become a regular part of society, the culture could see the same kind of turnaround in public opinion -- from rejection to acceptance -- that has occurred regarding gays and lesbians in recent years.

"There are still a lot of places in the United States where that education and familiarization still has to happen," he said. "One of them being the U.S. Catholic bishops. They have shielded themselves from knowledge of the reality of lesbian and gay couples."

He said the bishops have taken a "see-no-evil approach -- they have their eyes covered because they don't want to know that their position is not accurate."

The president of the U.S. Conference of Catholic Bishops, Archbishop Joseph Kurtz of Louisville, Ky., called the decision "a tragic error."

"Just as Roe v. Wade did not settle the question of abortion over forty years ago," he wrote in a statement. "Obergefell v. Hodges does not settle the question of marriage today. Neither decision is rooted in the truth, and as a result, both will eventually fail. Today the Court is wrong again. It is profoundly immoral and unjust for the government to declare that two people of the same sex can constitute a marriage."

Other bishops echoed the sentiment.

Archbishop Dennis Schnurr of Cincinnati, where Obergefell v. Hodges originated, wrote in a statement: "Under the false banner of 'marriage equality,' the United State Supreme Court today redefined marriage by judicial fiat. In so doing, it has disregarded not only the clearly expressed will of the electorate in Ohio and other states, but also an understanding of marriage that was shared by virtually all cultures -- secular as well as religious -- until recently.

"Although the decision is disappointing, it is undeniable that families headed by same-sex couples are growing in number and visibility. These families deserve everyone's love, respect, compassion, sensitivity and, where appropriate, pastoral care from the Church."

"This is simply a wrong, mistaken decision," Miami Archbishop Thomas Wenski wrote. "Of course, this is not the first time the Supreme Court got it wrong."

"I am bitterly disappointed that the majority of justices of the U.S. Supreme Court has decided to overturn the definition of marriage, which has remained unchanged for more than two millennia," wrote Bishop Richard Malone of Buffalo, N.Y. "Marriage is the lifelong exclusive union of one man and one woman, a font of unitive life and love as well as the foundation of a stable family and society."

"The Supreme Court's 5-4 decision on marriage is not a surprise," Philadelphia Archbishop Charles Chaput wrote. "The surprise will come as ordinary people begin to experience, firsthand and painfully, the impact of today's action on everything they thought they knew about marriage, family life, our laws and our social institutions."

In a USCCB teleconference held Friday afternoon, Catholic News Service’s Julie Asher asked if the church now runs the danger of being “labeled as bigoted” considering that debate over same sex marriage was couched in “civil rights terms.”

“In the public rhetoric we already have heard that, that kind of language addressed to the church, on this issue, perhaps on a few others as well” said Brownsville, Texas, Bishop Daniel Flores.

It’s is now up to the church to stick to its guns, he said, about “what the word marriage means, and what the institution as it’s been understood for millennia is about,” like “stable family life,” and “the many sort of goods that come from mothers and fathers and children as the basic cell of society.”

Baltimore Archbishop William Lori said that “as Americans, we should be ready to defend our rights under the first amendment, and that includes not only the right of free speech, but the right of free exercise.”

“To put a label on people as a way of closing off the debate or as a way of vilifying those who disagree really runs counter to what the first amendment intends,” he said.

“This wouldn’t be the first time we’ve experienced ostracism for our own beliefs,” Military Services Archbishop Timothy Broglio said, “all you have to do is go back to 19th century with the Know-Nothings,” a prominent anti-immigrant, anti-Catholic political party in the 1840’s and 1850’s.

“We survived that,” Broglio said, “we’ll survive this.”

Mike Huckabee, a Southern Baptist, opened an opinion piece in USA Today with a quote from the late Cardinal Francis George: "I expect to die in bed, my successor will die in prison and his successor will die a martyr in the public square."

"Let me be clear," Huckabee wrote. "When the Supreme Court abuses the limits of its power and attempts to create a right that doesn't exist in the Constitution, it is the duty of the president to reject this threat to our religious liberty as 'the law of the land.' As president, I will never bow down to the false gods of judicial supremacy."

"It is now crucial that as a country we protect religious freedom and the right of conscience and also not discriminate," Jeb Bush, a Catholic convert, said in a statement.

"This decision will pave the way for an all-out assault against the religious freedom rights of Christians who disagree with this decision," wrote Louisiana Gov. Bobby Jindal, also a Catholic convert.

At least one Catholic bishop gave a tempered response to the ruling.

"This decision of the Supreme Court is primarily a declaration of civil rights and not a redefinition of marriage as the Church teaches," wrote Bishop Gregory Hartmayer of Savannah, Ga. "However, this judgment does not dispense either those who may approve or disapprove of this decision from the obligations of civility toward one another. Nor is it a license for more venomous language or vile behavior against those whose opinions differ from our own."

But for those who opposed the decision, defiance ruled the day.

"While the Supreme Court's unfortunate decision means that the federal judiciary will force the states to make marriage something that it's not," wrote the conservative Christian nonprofit Alliance Defending Freedom, "society's discussion about the future of marriage isn't over."