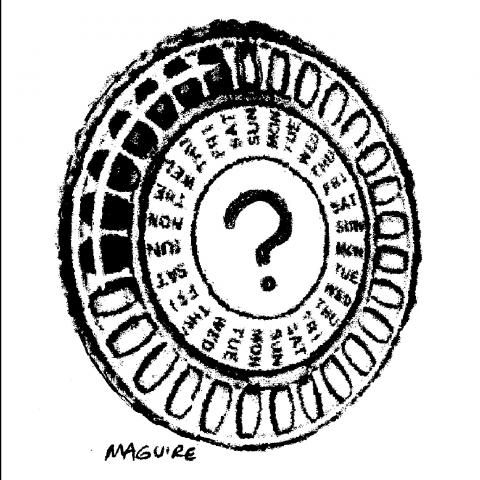 As the conversation surrounding the controversial birth control mandate continues, prominent theologians are saying President Barack Obama's decision on that subject just underlines the need for a much broader discussion among Catholics regarding the complex moral issues of our day.

On the birth control issue, Catholic bishops have made their position clear. In more than 160 letters to dioceses across the country, they have variably called the administration's decision an "affront to religious liberty" that would cause Catholics to "violate our consciences" regarding the morality of contraception.

Yet, in conversations with NCR and in their own postings online, several theologians are wondering if a more nuanced and lengthier discussion is in order. Each expressed regret that the bishops' recent outcry seems to narrow down the fullness of Catholic moral teaching to issues of sexuality.

"Conscience is such a hugely important topic," said Lisa Fullam, an associate professor of moral theology at the Jesuit School of Theology in Berkeley, Calif. "The fact that it tends to only be discussed in the light of sexuality is unfortunate."

At the heart of a broader discussion of moral issues, theologians say, would be how Catholics understand the notions of evil and conscience, and how this particular question raises many others about Catholic participation in a much wider range of morally questionable activities -- from war to sweatshops, and even including the production of food.

As Julie Hanlon Rubio, an associate professor of Christian ethics at St. Louis University, put it, this decision may reflect that Catholics "need to think about the ways in which our partnerships with government, corporations and even culture may lead us to compromise our most deeply held values."

The focus of Catholic moral teaching in the past has been on "individual issues," not involvement in governmental structures or societal institutions, Rubio said. In fact, the practice of moral theology first came about to help confessors know how to identify individual sins in the confessional.

"More recently, we've come to think more in ways that individuals cooperate with social evils, or participate in social sin, or hold up sinful social structures," she said.

The theologians also said that the focus on sexual issues is due to our understanding of the notion of "intrinsic evil." Long a staple of Catholic discussions of morality, the notion is somewhat hard to define. The Catechism of the Catholic Church does not use the phrase, but it does say: "There are concrete acts that it is always wrong to choose because their choice entails a disorder of the will, i.e., a moral evil."

In other words, Fullam said, an intrinsic evil is one in which "there is never any justification" for an action that aims at an evil "as a sole intended end."

Thus, she said, any judgment of sin must include consideration of a person's intention. Most moralists, she said, would agree that in order to describe something as an intrinsic evil, you would first have to know something about the intention and circumstances of the person who has undertaken that act.

It's clarifications like that, Fullam said, that show there is a lot more nuance to moral issues than may seem apparent at first glance.

The birth control pill cannot be considered evil by itself, she said -- after all it is "just a substance."

That's why hospitals can prescribe the pill to women who use it for some medical reason. The intention, she said, is preventing disease: "Contraception in that case is a side effect."

The importance of judging intention to understand the effect of any sin seems to underline the level of nuance necessary to judge complex moral questions.

Ultimately, Fullam said, each and every act requires discernment along the lines of some basic questions proposed by St. Thomas Aquinas: "What is the point of what you're doing and what are the circumstances?"

If all the actions we undertake, both individually and as a society, require a careful discernment of our moral ends, the question remains: Why does it seem that the bishops -- and even Catholics in general -- more seriously engage questions of sexual morality, while leaving many questions of social sin unanswered?

Look at the lack of outcry over the U.S.-led invasion of Iraq in 2003, said David Cloutier, associate professor of theology at Mount St. Mary's University in Emmitsburg, Md. While Pope John Paul II clearly opposed that war, U.S. bishops did not instruct their faithful to refrain from paying their taxes, which might fund the military, or to express disagreement in other ways.

Examination of social issues like war is typically the subject of "lengthy inquiry," focused on "different circumstances," Cloutier said, in contrast to the seemingly straightforward nature of Catholic teaching on sexuality.

Rubio said she tried to explore the subject of cooperation with evil in a paper about the morality of buying clothes that may have been made in sweatshops.

But, she said, "it was really difficult to draw out the lines of connection" on that subject, considering the "limits of knowledge" and other ethical questions about whether it is better for people in impoverished countries to have low-paying jobs than no jobs at all.

"It gets really complicated," she said. "It seems much more complicated than 'Am I cooperating with the evil of contraception?' "

In the same vein, Rubio said one of her colleagues wanted to evaluate the morality of meat-eating in light of the conditions of those working in meat factories and had the same difficulty.

Despite that difficulty to discern clear-cut answers to morality in some areas, Rubio said the attempt to do so emphasizes that in the Catholic tradition "there is definitely an affirmation that there is such a thing as structural sin, and we participate as individuals and we can be guilty of that."

That's why, although the bishops' statements on moral issues -- particularly sexual ones -- can sometimes seem blunt, Rubio said she appreciated their attempt to "talk about cooperation with evil," particularly when they bring up the issue in regard to voting.

"Although it tends to be focused on just a few issues," she said, "the idea I think is very useful: What do I do when I vote? What am I cooperating with?"

Theologian Daniel Maguire of Marquette University in Milwaukee comes to the topic with more fundamental questions: Who is the church? And how does the church discern morality?

The bishops' positions on the health insurance mandate cannot be separated from U.S. Catholics' widespread negligence in following the church's teaching on contraception, Maguire said.

It's no secret that since the 1968 promulgation of the encyclical Humanae Vitae, in which Pope Paul VI reaffirmed the Catholic ban on contraception, many faithful haven't followed the teaching. In fact, a study by the Guttmacher Institute last April estimated that some 98 percent of Catholic women in the U.S. who have had sex use contraception.

When considering the position of the church on any issue, Maguire said, it's important to remember that the bishops are not "the entire picture."

A fuller picture of how Catholics have discerned moral truths in the past, he said, would include a "tripod" of views: those of the hierarchy, the "magisterium of the theologians," and the "grace-filled, experience-filled wisdom of the faithful."

History, Maguire said, shows the importance of all three viewpoints. When a pope in the early Middle Ages said torture was morally wrong, many theologians rebuked him. And while official church teaching outlawed usury for many years, many members of the laity continued to collect interest on loans.

Cloutier said the level of dissent on birth control might indicate why the bishops are taking such a vocal stand against the administration's decision on the subject. He said the bishops might see it as an issue of "symbolic power."

"The whole tradition has been arguing about contraception as a stand-in for a lot of other issues about authority and dissent for a long time," he said.

That dynamic becomes especially clear, Cloutier said, when you consider that the mandate may exclusively impact the structures -- schools or universities, for example -- over which bishops have traditionally been able to show their dedication to the teaching by banning coverage in health care plans.

For Fullam, the number of those who have decided to neglect the official church teaching might also say something about how Catholics have decided to give weight to their own consciences when evaluating a question of morality.

A recent survey of some 1,400 representative U.S. Catholics seems to give credibility to that opinion. When asked who should have the final say in determining right and wrong, some 50 percent responded that individuals, not church leaders, should be the final arbiters of morality on several issues, including those of divorce, abortion, homosexuality and contraception (NCR, Oct. 28-Nov. 10, 2011).

While "it is logically possible that the vast majority of Catholics stumble into mortal sin" by neglecting the teaching on birth control, Fullam said, it is also possible that many "gave the matter serious thought," used "all of the resources at our disposal for formation of conscience," and came to a decision that "this teaching is not binding on my conscience."

If that is the case, she said, then the church "needs to look hard at why, and what this means."

It also reflects the fact, she said, that there is a notion of the "reciprocity of consciences" in Catholic teaching.

"The sheer magnitude of practical sense on the matter of birth control means it's a question that maybe hasn't been settled as completely as some people think," she said.

Yet, no matter how the morality of birth control is considered, Maguire said the focus of Catholics on sexual ethics tends to neglect a whole range of other teachings that are just as important.

Recalling conversations he has had with politicians seeking advice on how to win over Catholic voters, Maguire said that abortion is the "only issue" the politicians are normally concerned about.

"And yet Catholicism has a rich social justice theory," he said. "And they don't know anything about it. That's a real shame."