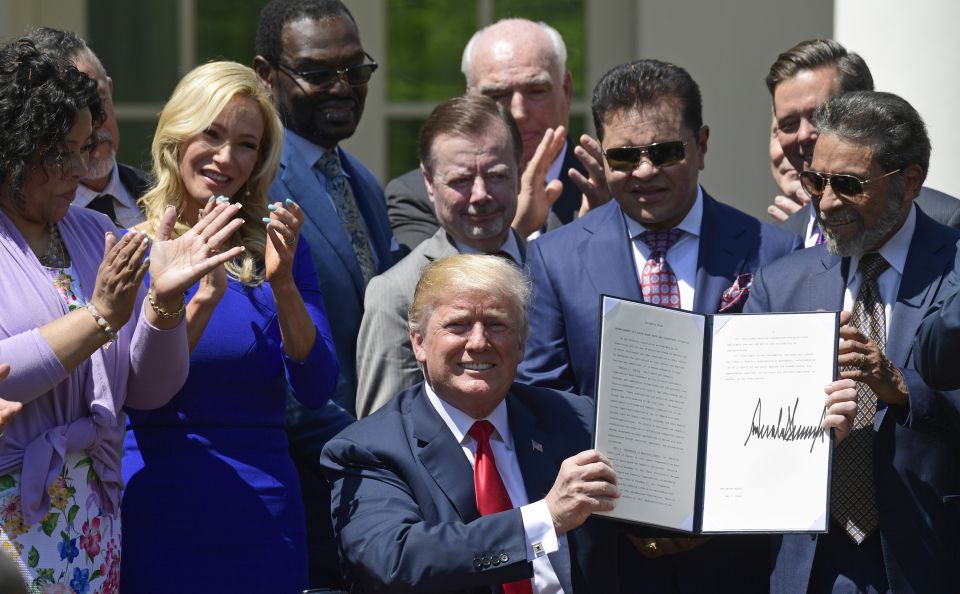 President Trump, largely surrounded by evangelical leaders, holds up an executive order that he signed during a National Day of Prayer event in the Rose Garden of the White House in Washington, D.C., on May 3, 2018. (RNS/AP/Susan Walsh)

Since President Trump took office, he met with then-Environmental Protection Agency Administrator Scott Pruitt. But he's never been invited to the White House.

"We haven't been invited to any meetings there or to any other agency," said Carolan, executive director of the Franciscan Action Network, who noted his staffers also had regular meetings in the Bush administration.

Though the White House is always a busy place with limited invitation lists, the two previous administrations made concerted efforts to connect with a wide array of faith groups that may not have agreed with most of their political positions but nevertheless could meet together, at least on occasion, for what the Obama administration called "partnerships for the common good."

Now, it appears the Trump administration is taking a different approach — giving selective access to the White House to some faith groups while having cabinet-level offices meet with others. Some groups say they have been left out.

Conservative Christians have been the most visible religious visitors to the White House. Notably, they were guests at a dinner just for them in the State Dining Room in August. Days later, Americans United for Separation of Church and State requested that such White House gatherings of evangelicals come to a halt.

When asked about AU's assertion that continuing meetings with that select stripe of American religiosity violated federal law, the White House told Religion News Service: "The Administration continues to engage hundreds of faith leaders on various issues that directly impact their communities."

But Carolan said he and numerous other religion-related advocacy groups in the nation's capital are not in that number.

The White House, which has yet to appoint an adviser to its Faith and Opportunity Initiative announced in May, did not immediately respond to requests for additional information about its connections with faith groups. But the Justice Department and State Department provided some details of their religious outreach.

More than a year ago, the Sikh American Legal Defense and Education Fund called interaction with the White House at a "very limited level to practically nonexistent." More recently, said communications director Gujari Singh, there have been meetings with offices of the Departments of Education, Justice and Homeland Security.

The American Sikh Council, with dozens of gurdwaras representing 100,000 families, says it has received no invitations.

"No one from the White House has ever communicated with us since the new president came in," said Kavneet Singh, the council's chief resource and advocacy officer. "We have attempted to contact the Trump administration but to no avail."

Imam Mohamed Magid, leader of All Dulles Area Muslim Society in Virginia, declined his sole invitation to the White House when he was traveling during the Rose Garden ceremony in May marking the National Day of Prayer. But the former president of the Islamic Society of North America attended the State Department's religious freedom summit in July and has met with Sam Brownback, U.S. ambassador-at-large for international religious freedom, about the plight of Rohingya Muslims, along with an interfaith coalition pleading their cause.

His relief group, along with the Hindu American Foundation and Church World Service, is among the groups that report meeting with the State Department. A department official confirmed that Brownback's regular roundtables include faith group representatives and "those holding no faith at all." Those meetings have addressed "policies and practices of foreign governments and non-state actors that impact religious freedom, cases of individuals imprisoned on account of their beliefs, and global themes and trends impacting the enjoyment of these rights."

Catherine Orsborn, director of the Shoulder to Shoulder Campaign, an interfaith group that counters anti-Muslim bigotry, has attended State roundtables, which she said have recently focused on alleviating persecution of Uighur Muslims in China and Rohingya in Myanmar. She said the Justice Department has also asked her organization, Muslim groups and other organizations for advice as it prepared training for law enforcement to increase understanding of Muslim and Sikh Americans.

"Regardless of what administration is in the White House, we have always been able to ensure the Reform Jewish Movement has a seat at the table and our concerns are met with respect," said Rabbi Jonah Dov Pesner, director of the Religious Action Center of Reform Judaism, whose group has advocated on issues such as health care, criminal justice and immigration.

Nathan Diament, executive director for public policy for the Union of Orthodox Jewish Congregations of America, ticked off examples of invitations Orthodox Jewish leaders have accepted: Trump's Hanukkah reception, the National Day of Prayer event in the Rose Garden and the pre-Rosh Hashanah conference call.

Not much has changed for the National Council of Churches and Christian Churches Together, two groups whose memberships include a wide range of Christian traditions. NCC President Jim Winkler said he attended one meeting with an interfaith group and a White House staffer in the Eisenhower Executive Office Building about a year ago and has had no other interaction. CCT Executive Director Carlos Malavé said he has received no invitations to meetings at the White House or with senior staff.

Evangelicals, who have detailed their own gatherings with White House staffers, say they have been told of meetings with people of other faiths.

"It's been made clear to us that they are getting advice from other faith leaders besides us," said Richard Land, president of Southern Evangelical Seminary, who attended the Rose Garden ceremony in May that featured prayers from Catholic, evangelical, Jewish, Hindu, Muslim and Mormon speakers.

Johnnie Moore, who has served as an unofficial spokesman for the group of evangelicals who have prayed for and met with Trump, said he has been part of White House staff meetings with nonevangelicals on topics such as criminal justice reform, disaster relief and the opioid epidemic.

"I have been in meetings at the White House with Catholic, Orthodox, Protestant and evangelical Christians as well as with Hindu, Jewish and Muslim citizens and clergy," Moore said.

Asked about the current administration practices — giving White House or cabinet-level access to some groups and having no interaction with others — religious freedom expert Charles Haynes said he sees a change from previous presidents dating to Bill Clinton.

"I think it's a world of difference," said Haynes, in contrast with the three administrations where he saw a "common thread" of engaging people of different faiths and backgrounds.

"Yes, of course, more traditionalist religious people in different faith communities are probably going to have a seat at this current table, but what about people who deeply disagree?" asked Haynes, founder of the Religious Freedom Center of the Freedom Forum Institute. "What about progressive groups or religious groups?"

Mythili Bachu, the past president of Sri Siva Vishnu Temple in Lanham, Md., is familiar with White House invitations because a priest from her Hindu temple, Narayanachar Digalakote, prayed at the Rose Garden in the spring and also took part in a Diwali White House ceremony with President Obama. She sees communications with the White House — past and present — as a two-way street.

"We also have to reach out and say how we can help them," said Bachu. "They're so busy so I'm not going to sit here and say one is better than the other but we have to do our bit also."