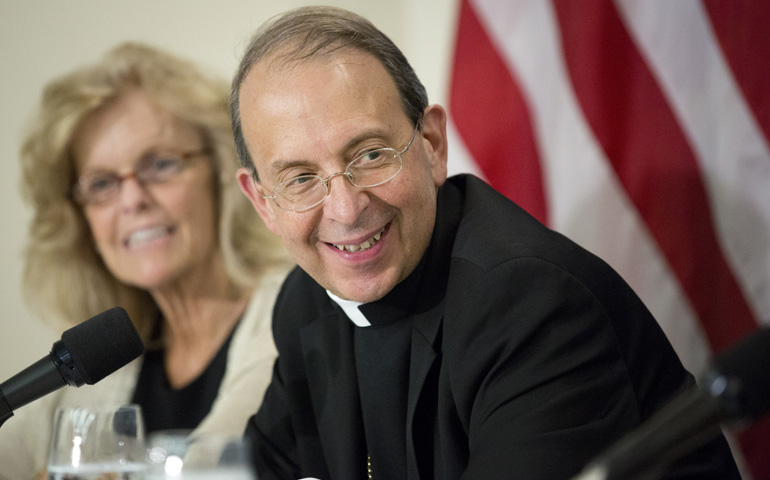 Archbishop William Lori of Baltimore, chairman of the U.S. bishops' Ad Hoc Committee for Religious Liberty, joins other religious leaders at a news conference regarding the Health and Human Services contraceptive mandate Tuesday at the National Press Club in Washington. (CNS/Tyler Orsburn)

While the U.S. bishops are officially "carefully analyzing" the Obama administration's latest accommodation for coverage of contraceptive services in health care plans, one of their key leaders on Tuesday announced his signature on a letter decrying the adjustment as "coercive."

The move by Baltimore Archbishop William Lori, chairman of the U.S. Conference of Catholic Bishops' Ad Hoc Committee for Religious Liberty, could mean that the prelates see their fight over the government's mandate, which started more than a year and a half ago, as far from finished.

The letter, which was signed by Lori and 57 other religious leaders -- including representatives of the Southern Baptists, the Church of Jesus Christ of Latter-day Saints, and the International Society for Krishna Consciousness -- concerns a Department of Health and Human Services mandate originally issued in January 2012.

"The HHS policy is coercive and puts the administration in the position of defining -- or casting aside -- religious doctrine," the letter says. "This should trouble every American."

The letter, titled "Standing Together for Religious Freedom," was released Tuesday during a news conference at the National Press Club in Washington.

Speaking during the conference, Lori said the mandate separates members of the Catholic church into three groups based on whether they will be exempted from its provisions or not.

"We in the Catholic church have never seen such a distinction between what we do within the four walls of a church and how we serve our neighbors," Lori said. "The faith by which we worship on Sunday is the very same faith by which we act in the world the other six days of the week."

The mandate, which the Obama administration has amended several times, is part of the implementation of the health care reform law.

The administration announced its final accommodation of the mandate Friday. According to that adjustment, any organization that self-certifies as a nonprofit religious group with religious objections to contraceptive coverage could defer coverage of contraceptives to a separate health insurance issuer.

The final adjustment also moved the start date for the mandate from Aug. 1 to Jan. 1.

"We appreciate the extension of the effective date by five months, which is readily apparent in the rule," New York Cardinal Timothy Dolan, president of the U.S. bishops' conference, wrote in a press release following Friday's announcement of the accommodation. "The remainder of the rule is long and complex. It will require more careful analysis. We will provide a fuller statement when that analysis is complete."

Others who spoke at the Tuesday press briefing included Russell D. Moore, head of the Southern Baptist Convention's Ethical and Religious Liberty Commission, and Anne Hendershott, a professor of sociology at Franciscan University of Steubenville, Ohio.

While the bishops' conference initially described the event in an email as "Religious Coalition For Conscience Protection To Protest HHS Mandate," it later corrected the title, changing the word "protest" to "address." A sign posted at the National Press Club labeled the event: "Faith groups oppose HHS mandate."

Two of the national organizations representing hospitals and universities, the Catholic ministries that could be most affected by the mandate, have so far declined to issue opinions on the accommodation.

Michael Galligan-Stierle, president of the Association of Catholic Colleges and Universities, said in a statement Saturday that his group would continue to study the matter but was "encouraged by the administration's apparent recognition of the challenges that many Catholic organizations will face in bringing their insurance policies into compliance."

Fred Caesar, special assistant to the president for communications at the Catholic Health Association, wrote in an email Tuesday that his group is still studying the rules and "will have no comment until we have had time to complete that."

Lori said the bishops are still studying the final accommodation but, he said, "the contours of the mandate are the same."