While House redistricting may keep GOP in place, real battle is within the party 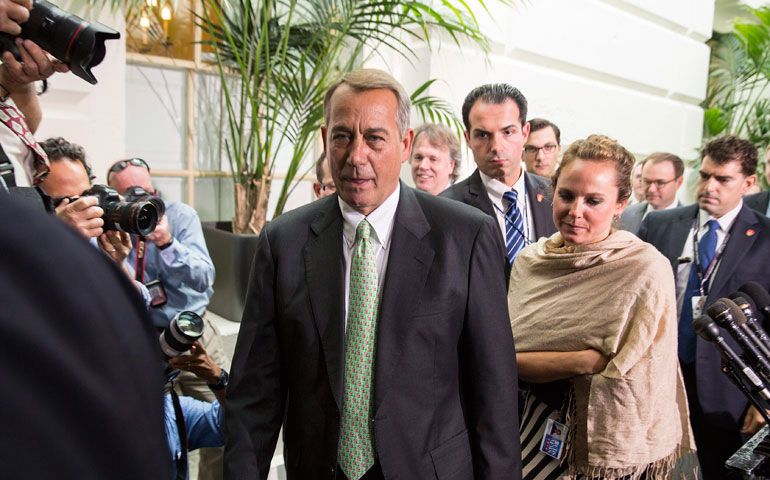 Speaker of the House John Boehner leaves a Republican caucus meeting at the Capitol in Washington Aug. 1 after a bill to fund border security foundered on tea party demands. (Reuters/Joshua Roberts)

While the race for control of the U.S. Senate in this year's midterms is completely up for grabs, no one has any doubts that the Republicans will continue to control the House of Representatives. In fact, very few of the 435 House seats to be filled in November are even listed as tossups by the major analysts.

At the beginning of the year, Republicans were anticipating a wave election. The botched rollout of the Affordable Care Act, combined with the historical drubbing an incumbent president's party gets in a midterm election, seemed to suggest the GOP would vastly increase their margin of control in the House. But almost no one is talking about the Affordable Care Act after the administration fixed the website and managed to exceed its target of 8 million new people with health care. And the GOP made such sweeping gains in the 2010 midterms, there are not many low-hanging districts for them to pick off more Democratic incumbents.

"There are several reasons why so few House races are competitive this year," said Matthew Green, politics professor at The Catholic University of America. "National conditions are neither so bad nor so good as to create a 'wave' in favor of either party. Nor has either party had remarkable success recruiting strong candidates to challenge potentially vulnerable incumbents.

"But perhaps the biggest reason is that there are very few districts represented by an incumbent from the 'wrong' party," said Green, who specializes in the study of Congress. "Out of 435 congressional seats, perhaps 20 of them are held by a member whose district leans away from his or her party, with maybe a dozen more being true 'swing' districts. With those numbers, most House elections are bound to be boring affairs."

One of the reasons there is so little competitiveness for House seats is the efficiency with which computer models can facilitate redistricting. In 2010, Republicans not only swept control of the House, they took the reins of many state legislatures and governor's mansions. They controlled the redistricting process in swing states like Pennsylvania, Ohio, Florida and Virginia, allowing them to draw lines that favored their party's candidates. Only a few states, like Connecticut and Maryland, saw the Democrats with a similar degree of control over the redistricting process.

Green thinks the effects of redistricting are not the critical factor, however, in robbing competition from the election.

"Redistricting may be partly to blame for this, but where people live, and how it relates to party preferences, matters much more," he told NCR. "Urban voters are largely Democrats, so districts with cities and inner suburbs vote lopsidedly for Democratic candidates, while people in outer suburbs and rural areas vote Republican. Not only does this mean the absence of electoral competition; it also gives Republicans a natural advantage in the House, since there are more suburban and rural districts than pure urban ones."

This stratification of the electorate, in which people choose to live with other like-minded people, is not entirely new. There was once a "solid South" that voted Democratic through thick and thin, generation after generation. The Republicans could count on winning northern New England every election. But what were once regional divisions are now cultural divisions found within each state. Atlanta may send a couple of Democrats to Congress, but the rest of Georgia sends only Republicans. Republicans can sweep Virginia, except the northern counties that are suburbs of Washington, D.C.

This lack of contested House elections is the exact reverse of what the founders intended. The requirement that House members stand for election every two years was designed to guarantee that their election contests reflected shifts in popular opinion. By contrast, the six-year terms for senators were crafted to insulate the upper chamber from the changing winds of politics.

"It is ironic that, today, thanks to a combination of sophisticated, fine-grained districting techniques and socioeconomic and ideological 'sorting,' a typical member of the House is comfortable and safe, even in the face of movement and shifts in public opinion," said Rick Garnett, who teaches constitutional law at the University of Notre Dame. "On the other hand, Senate races are usually nationalized, both in terms of funding and issues, and therefore more volatile. The idea that the Senate serves -- as George Washington is rumored to have put it -- as a cooling 'saucer' for the House's populist, more politically responsive exuberance still has some merit, but is increasingly anachronistic."

Arguably, the most interesting ideological fight in the race for control of the House has already happened. The important division with Congress the past few years was not so much between Republicans and Democrats as it was the periodic struggles between establishment Republicans and their tea party colleagues. In 2010, tea party candidates burst on the scene, often costing the GOP the chance to pick up a Senate seat. In Nevada, Colorado and Delaware, fringe tea party candidates defeated more establishment, centrist Republicans, only to be trounced in the general election by a moderate Democrat.

In the House, however, where districts tend to be overwhelmingly in the camp of one or the other party, many tea party candidates won the GOP primary and the general election. Ever since Congressman John Boehner took the gavel as speaker of the House, these tea party colleagues have persistently challenged his decisions, forcing him to pull legislation from the floor just before a vote when the tea party balked at passing it. The Tea Party Caucus connived with their Senate counterparts to shut down the government last year, a debacle that failed to inflict long-term damage to the GOP brand only because it was followed so quickly by the Obama administration's disastrous rollout of the Affordable Care Act.

While he would never admit it, Boehner's biggest worry in 2014 was not that the Democrats would take control of the chamber, but that the tea party would win more GOP primaries and make his attempts to control his own caucus even more challenging in the years ahead.

Boehner's nightmare did not come to pass.

"Overall, I'd say the tea party did not have much success in Republican primaries this time around," Green said. "Yes, tea party insurgents did take down the House majority leader [Eric Cantor] in a primary, which was a huge and historic victory. And some insurgent candidates did get nominated to run in open seats. But many Republican incumbents who first seemed in danger of getting beat in their primaries -- Mike Simpson of Idaho, Pete Sessions of Texas, Thad Cochran of Mississippi -- survived, albeit sometimes by a whisker."

Election night, all eyes will be on the results in the Senate races and several key governor's contests. We already know what the House will look like next year: It will be controlled by the GOP, but that control will be limited by the Tea Party Caucus' willingness to buck Boehner on issues that matter to it, and not much is likely to get done. The problem is not that some of the founders will be rolling in their graves, but that the country will still not get the leadership it needs, only the leadership it has come to deserve.

[Michael Sean Winters blogs about religion and politics at his blog, Distinctly Catholic.]

Column | While House redistricting may keep GOP in place, real battle is within the party