Will one of these three be the next president? 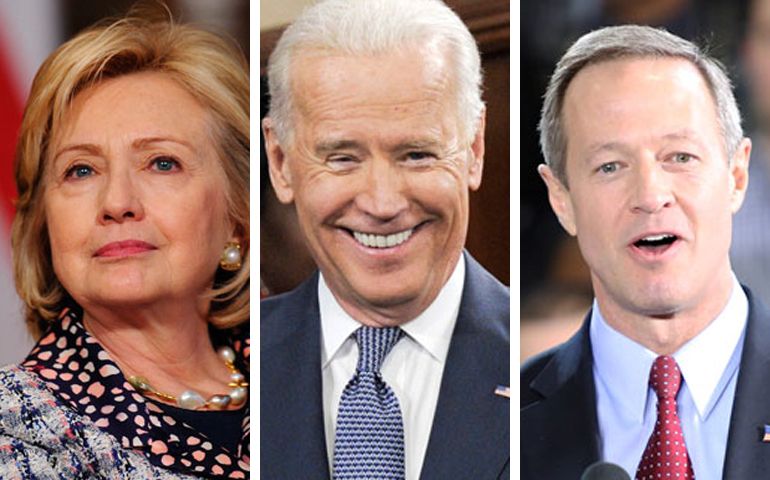 Editor's note: In this column, Michael Sean Winters examines the potential presidential candidates for 2016 from the Democratic Party. Next month, he will focus on the Republican frontrunners.

What happened to 2015? And to the rest of 2014? In the past few weeks, a series of breathless commentaries, new analyses and op-eds have all been focused on the presidential election in 2016. The commentariat jumped through the time warp and beckons the rest of us to follow.

We should usually resist. The one thing for certain that I can tell you about the 2016 election is that the issue or event that will drive the political debate has not yet been identified and may not yet have happened. Who knows how the Affordable Care Act will be playing two months from now, let alone two years from now? No one can predict what the unemployment rate will be in 2016. There could be a terrorist attack. Iran could successfully test a nuclear bomb. It is hard to imagine the gun violence could get worse, but it could, and few issues bring more political landmines than gun control. In short, at this stage of the game, it is all speculation, which, like most speculations and fantasies, are indulged because they are kind of fun.

The immediate reason for all the focus on 2016 has been the stunning decline in the fortunes of New Jersey Gov. Chris Christie and the stratospheric poll numbers achieved by former Secretary of State Hillary Clinton.

Let's start with the Democrats. Usually, they are the party that has all sorts of ideological wrangling, a half-dozen serious candidates, and a suspicion of any deference to an establishment pick. Not this time. Clinton is deemed "inevitable." I confess to finding it a bit shocking that, in a nation of 300 million people, anyone would be seen as inevitable for the highest office in the land. Clinton also faces a hurdle that has not yet manifested itself, namely, even her most devoted admirers have a hard time pointing to anything she accomplished as secretary of state. There were plenty of goodwill tours, but what was accomplished? Whatever one thinks of the policies being pursued by her successor, John Kerry, he is at least doing the kinds of things a nation's chief diplomat does. No one doubts that Clinton is smart and able. Effectiveness is another matter, and an important one, and one not likely to become less significant as President Barack Obama's last years in office see him growing more and more ineffective.

None of that could matter. People like being a part of history and the election of the first woman president would certainly be historic. Even people who regretted the election of Obama in 2008 because of his policies could recognize that the election of a black American as president said something good about the country's progress on race relations. Clinton will undoubtedly benefit from a similar sensation, and that may well be enough to carry her across the finish line and into the White House.

The two most likely candidates to give Clinton a challenge are both Catholics: Vice President Joe Biden and Maryland Gov. Martin O'Malley. (Full disclosure: O'Malley was in college with me back in the day and I hosted a fundraiser for him when he ran for governor in 2006.) Both men are also old-style social justice Catholics and likely to be less defensive about their political stances under the pontificate of Pope Francis than Kerry was as a candidate in 2004. Kerry hated talking about his religion in public. Biden or O'Malley could hire Francis as a speechwriter.

A Biden candidacy is only plausible if Obama's poll numbers improve and if the electorate seems prepared for a "more of the same" pledge combined with a few atmospheric changes. This has happened twice in my lifetime: In 1988, George H.W. Bush won the presidency promising continuity with Ronald Reagan's policies, but calling for a "kinder, gentler America." And in 2000, Al Gore got more votes than the other guy, but lost the White House anyway. Gore never could decide whether to run as a continuation of the Clinton years or choose a different path. His convention speech was filled with populist economic ideas of the kind we now associate with Sen. Elizabeth Warren, D-Mass., but once Gore left the hall, he could never find that powerful voice again.

It is hard to imagine Biden winning without distancing himself from Obama, and it is just as difficult trying to imagine how he could so distance himself. It is undoubtedly the case that in some ways a Biden presidency would be more effective than Obama's has been: For starters, Biden has no trouble investing time and effort into cultivating personal relationships with members of Congress upon whom any president must rely for help in achieving his or her political objectives, something Obama never grasped or pursued. But that is not the kind of difference that resonates with voters. Biden has greater appeal to white, working-class voters with whom Obama struggled. Conversely, it is hard to imagine Biden generating the kind of enthusiasm Obama did with young voters.

O'Malley has a strong track record as governor, especially for a governor with aspirations to secure the Democratic nomination. He passed gun control legislation last year when Obama couldn't get it through Congress. His first year in office, he raised taxes on the wealthy. O'Malley has increased spending on education and Maryland ranks at the top of most measures of educational achievement. He got his legislature to pass a state-sized version of the DREAM Act, awarding in-state tuition to undocumented immigrants who were brought to this country at a young age by their parents. Currently, he is pushing a minimum wage hike through the legislature. Not a bad resume.

But O'Malley's greatest strength as a candidate may not be his time as governor but his time as mayor of Baltimore. He is a hands-on guy and that has made him a very effective campaigner on the stump. I do not have difficulty seeing him trudge through the snows of New Hampshire to three house parties a night and wowing his audiences. He is razor-sharp smart, handsome, and plays guitar in an Irish band. And in a culture that worships youth, he is a generation younger than either Clinton or Biden.

It may be the conventional wisdom that the Democratic nomination is Clinton's for the asking. But every campaign slips on a banana peel and, in 2008, Clinton's campaign slipped on some peels that were easily avoidable and it never recovered. You can bet that won't happen again, but something else will. It could be a terrible interview. It could be a weak debate performance. The Clintons are never far from drama, so it could be something her husband, Bill, does or says. How Clinton responds will either seal the race or end it.

For Catholics, on a host of neuralgic issues such as the contraception mandate, Clinton, a Methodist woman, may be more receptive to the concerns voiced by Catholics than would either of the Catholic men. It is safe to say that she doesn't have to worry overmuch about securing the support of women's groups or women voters. And her husband was a master at not offending the values of more conservative white, working-class voters, many of them Catholic, who decide elections in key swing states like Pennsylvania, Ohio and Wisconsin. Before she was first lady of the United States, she was the first lady of Arkansas. Obama's campaign theme of fighting the "war on women," would not be Clinton's theme because it wouldn't have to be. Still, what would the theme of her campaign be? That is tougher to answer. And until she comes up with an answer, people like Biden and O'Malley will be laying the groundwork for a run.

Column | Will one of these three be the next president?

It's time to end the Electoral College

What do Catholics say about the third-party presidential candidates?