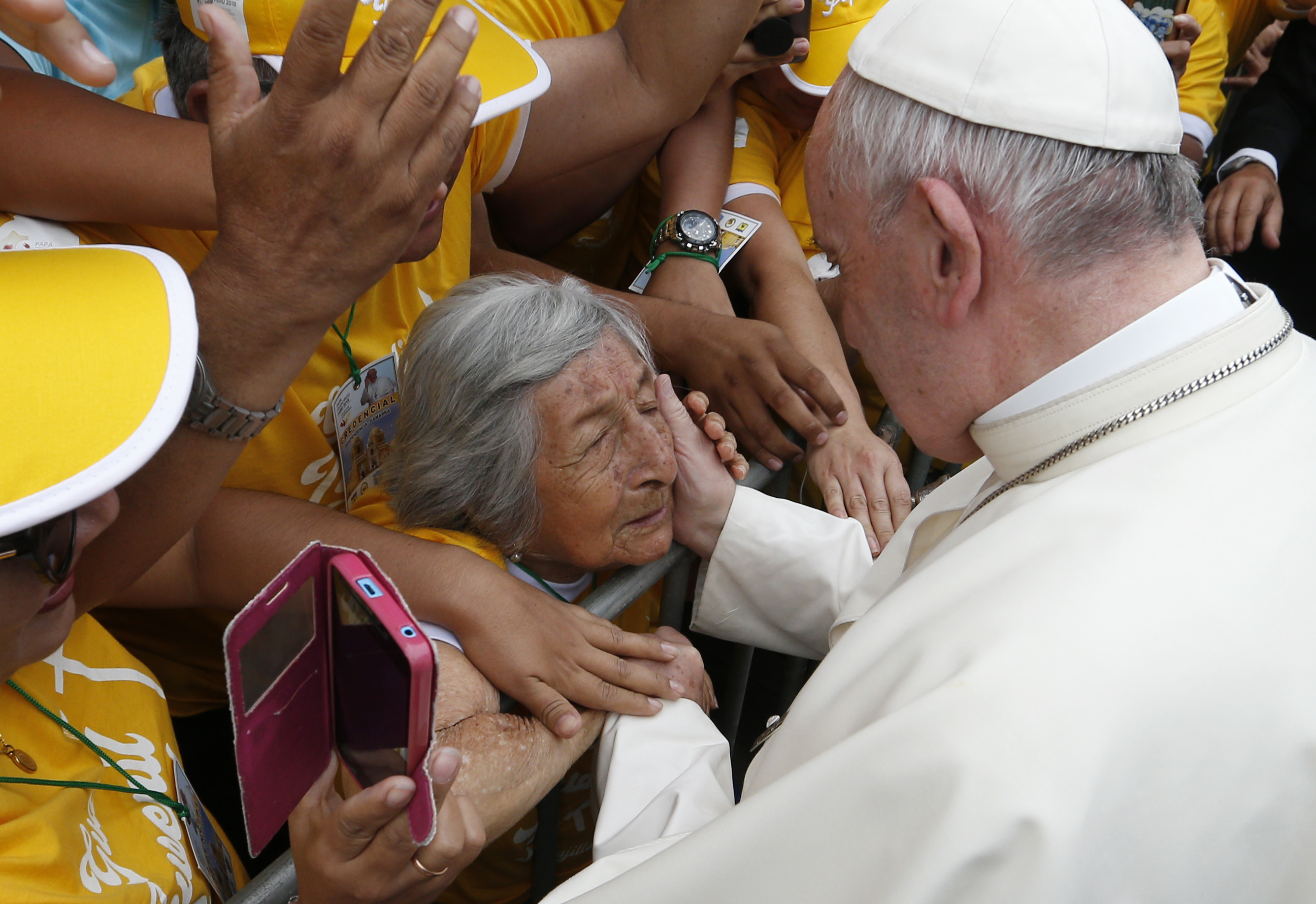 Pope Francis greets a blind woman who is 99 years old along the parade route in Trujillo, Peru, Jan. 20. At the end of their plenary meeting March 6-9 at the Vatican, members of the Pontifical Commission for Latin America proposed that the church hold a Synod of Bishops "on the theme of the woman in the life and mission of the church." (CNS/Paul Haring)

The Catholic Church in Latin America must recognize and appreciate the role of women and end the practice of using them solely as submissive laborers in the parish, said members of a pontifical commission.

In addition, at the end of their plenary meeting March 6-9 at the Vatican, members of the Pontifical Commission for Latin America proposed that the church hold a Synod of Bishops "on the theme of the woman in the life and mission of the church."

"There still exist 'macho,' bossy clerics who try to use women as servants within their parish, almost like submissive clients of worship and manual labor for what is needed. All of this has to end," said the final document from the meeting.

L'Osservatore Romano, the Vatican newspaper, reported April 11 that the theme of the four-day meeting, "The woman: pillar in building the church and society in Latin America," was chosen by Pope Francis.

In addition to 17 cardinals and seven bishops who are members of the commission, the pope asked that some leading Latin American women also be invited; eight laywomen and six women religious participated in the four-day meeting and in drafting its pastoral recommendations, the newspaper said.

While the assembly expressed appreciation for and based many of its proposals on the Latin American bishops' Aparecida document, participants said more needed to be done to implement concrete solutions to the problems facing women in Latin America.

As archbishop of Buenos Aires, Argentina, then-Cardinal Jorge Mario Bergoglio headed the drafting committee for the final document of the Fifth General Conference of the Bishops of Latin America and the Caribbean, in 2007 in Aparecida, Brazil.

The Aparecida document's call to renew the church's commitment to mission and discipleship in Latin America must be followed through by local churches, especially "in denouncing every form of discrimination and oppression, violence and exploitation that women suffer in various situations," the Pontifical Commission for Latin America's final document stated.

Expressing appreciation for the Christian witness given by women in consecrated life, mothers who are "authentic 'martyrs' giving their lives for their families" and widows who serve their communities in charity, the commission document said women can and should play a greater role in church life, including in the formation of future priests.

In order for priests to benefit from the "feminine genius," it said, it is important for married women and consecrated women "to participate in the formation process."

Women should be a part "of the formation teams, giving them authority to teach and accompany seminarians, as well as the opportunity to intervene in the vocational discernment and balanced development of candidates to the priestly ministry," the document said.

The commission also warned of the negative influence "telenovelas" (soap operas) have on Latin American women because the programs undermine marriages and families that are labeled "traditional" while advocating a variety of other forms of cohabitation.

In addition, the document said, "they attempt to undermine motherhood, which is depicted as a prison that reduces the possibilities of a woman's well-being and progress."

In Latin America, meeting participants warned, poor women are subjected to "undignified and horrible forms" of exploitation by "renting out their wombs" for surrogacy and influenced by foreign organizations.

"Feminist lobbies that are well-funded and orchestrated by international agencies" play a role in diminishing the dignity of women, the document added.

The figure of Mary as "a free and strong woman, obedient to the will of God," can be crucial in "recovering the identity of the woman and her value in the church," the document said.

Like Mary proclaiming the "Magnificat," women can have a prophetic voice and demonstrate "the feminine and maternal dimension of the church," the document stated.

"The Catholic Church, following the example of Jesus, must be very free of prejudices, stereotypes and discrimination against women," the final document said. "Christian communities must undertake a serious review of their life and a 'pastoral conversion' capable of asking forgiveness for all those situations in which they were and still are accomplices in attacking their dignity."

Participants at the meeting called for improved relations between local bishops and the religious orders of women who minister in their dioceses, saying women religious "must be recognized and valued as jointly responsible for the communion and mission of the church."

Women should be more involved in decision making on a parish, diocesan, national and global church level, participants said. Such openness is not "a concession to pressure," but the result of an awareness that "the absence of women in decision making is a defect, an ecclesiological lacuna, the negative effect of a clerical and chauvinistic mentality."

Greater efforts, they said, must be made to educate men to overcome chauvinism, counteract the abandonment of their children and "irresponsibility in sexual behavior."