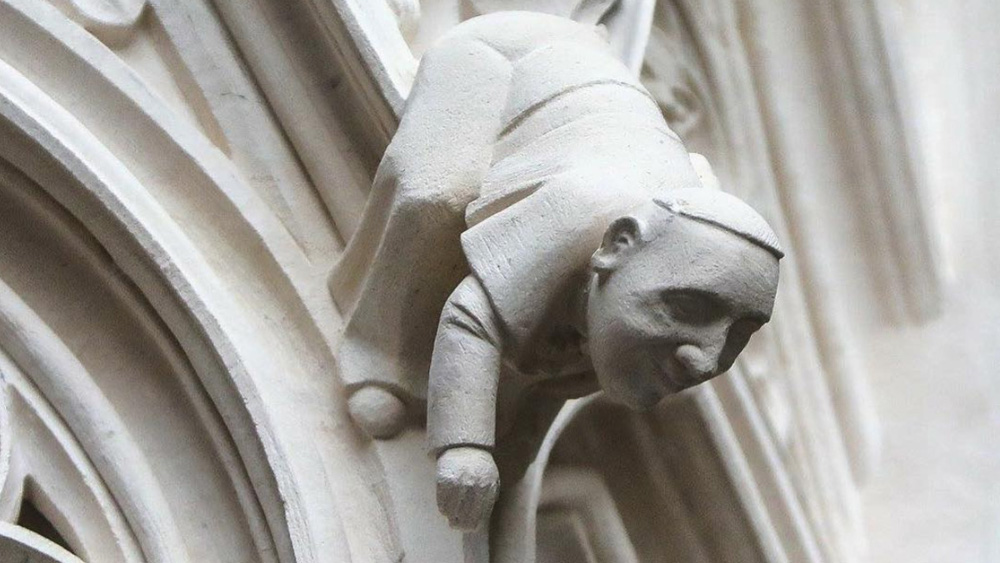 A new gargoyle of Pope Francis adorns a wall of the Cologne cathedral in Germany. (Henning Schoon via Cologne Cathedral Instagram)

It took about a week for visitors to the massive Catholic cathedral in Cologne, Germany, to notice a small addition to its ornate Gothic entrance — a carved stone figure of Pope Francis leaning forward like a gargoyle.

The new gargoyle is smiling and there's no water spouting out of his mouth, so it doesn't resemble the ghoulish medieval drains jutting out from famous old cathedrals around Europe. Instead, the figure is a small decoration, like many other little statues in nooks and crannies all around the building.

Germany's largest Gothic church, which dominates the skyline of the fun-loving city along the Rhine River, has a tradition of carving surprising statues and symbols to adorn its architecture.

On its roof, a vast space not visible from the large square down below, statues of John F. Kennedy, Nikita Khrushchev, Charles de Gaulle and Harold Macmillan huddle in a summit meeting. Another group of statues shows a parade for Carnival, the boisterous street party the city throws every year just before Lent.

The stone carvings include a buxom Tanzmariechen, one of the high-kicking women dancers at Carnival parties, a famous local boxer, several soccer players and even the billy goat mascot of the local team.

"Have you found it yet? Pope Francis is at Cologne cathedral!" the cathedral asked on its official Facebook page, above a picture of the stone figure of the pope.

"We immortalized Pope Francis in the Cologne cathedral about a week ago," the cathedral's master builder, Peter Füssenich, told the local newspaper Express in late October. "It's only a decoration; there's no water coming out like a real gargoyle."

The sculpture shows the Argentine-born pope smiling at passers-by with his right hand ready to greet them. It's attached to a stone canopy over a large statue of the Bible's King Solomon, like a little bird perched over his shoulder to observe the crowd.

The cathedral has a staff of about 100 artisans to regularly refurbish its artworks, including dozens of stonemasons who make replacement copies of outside statues and structures worn down by years of rain, snow and smog.

They have so many repairs to make that local legend says the world will end the day work on the cathedral stops. Construction on the massive building began in 1248, was halted in 1473 and finally finished in 1880.

Gothic cathedrals across Europe have always had graphic statues and paintings showing Bible scenes, saints or images of both heaven and hell.

In Paris, Notre Dame boasts a carved stone scene of the Last Judgment over its main entrance that shows grinning devils hauling sinners off to hell in a chain gang. Among their catch are a rich man, a bishop and a king.

On the south portal of the cathedral in Chartres, a devil carries off a naked prostitute on his back, her long hair flowing down to the ground.

Visitors inspecting the wooden choir stalls in front of the main altar in some cathedrals can find scenes of everyday life attached to the underside of the seats.

When the hinged seats are flipped up, they reveal carvings known as "misericords" (mercy seats) showing everything from angels and flowers to monsters, men at work or people engaged in sex.

Cologne cathedral's spokesman, Matthias Deml, said the building's northern portal was bombed during World War II and stonemasons repairing it started carving all sorts of small statues to place on the roof, where they could not be seen from below.

"From the Middle Ages to the 19th century, most of the decorations depicted plants, especially leaves," he told a local radio station. "After the war, the restoration work got more creative … the masons had more leeway and they began to make these statues."

Some masons have put their own faces on statues.

One master builder was immortalized as a man chatting on his cell phone. Although the cathedral has stopped the proliferation of secular statues, Francis' popularity was a good excuse to make an exception for a pope.

"About 20,000 visitors stream into the cathedral daily through the main entrance on the western facade," the local daily Express wrote when it discovered the new statue. "Now they have to be careful — Pope Francis sees everyone who goes in and comes out."

Not everybody seems pleased with the new statue.