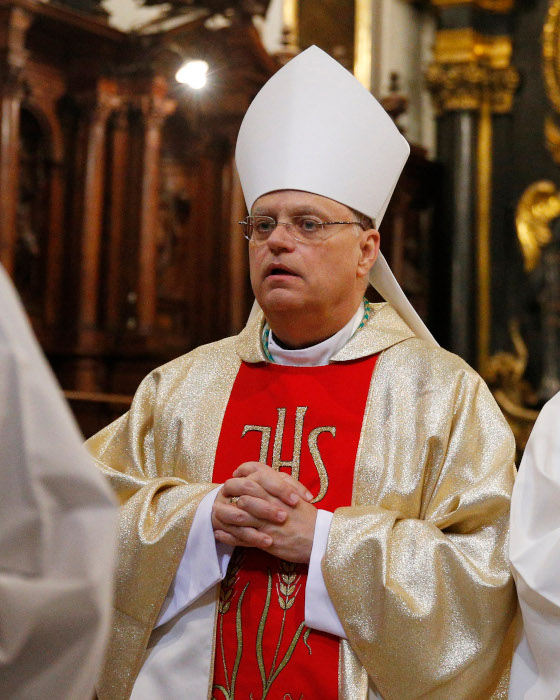 Bishop Andrew E. Bellisario of Juneau, Alaska, is seen at the Basilica of St. John Lateran in Rome Feb. 4, 2020. Pope Francis announced May 19 he will be the new archbishop of the newly configured Archdiocese of Anchorage-Juneau. (CNS/Paul Haring) 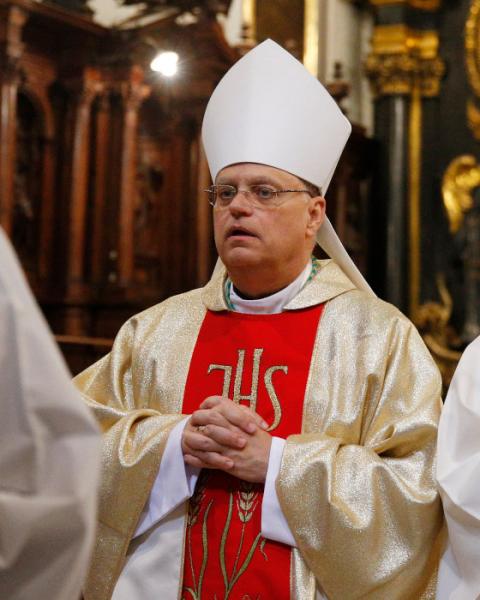 Bishop Andrew E. Bellisario of Juneau, Alaska, is seen at the Basilica of St. John Lateran in Rome Feb. 4, 2020. Pope Francis announced May 19 he will be the new archbishop of the newly configured Archdiocese of Anchorage-Juneau. (CNS/Paul Haring)

Archbishop Christophe Pierre, the Vatican nuncio to the United States, announced the merger and the new appointment May 19 in Washington.

Bellisario, 63, was named the sixth bishop of Juneau July 11, 2017. His episcopal ordination and installation was Oct. 10, 2017. The prelate was ordained a Vincentian priest. He entered the Congregation of the Mission in 1975 and was ordained June 16, 1984.

As its website says, the Diocese of Juneau is the smallest diocese in the United States in terms of Catholic population and one of the largest in terms of the territory it covers. It has 7,249 Catholics out of a total population of over 75,000, and covers over 37,000 square miles in area in southeast Alaska.

The Archdiocese of Anchorage was established Feb. 9, 1966, by St. Paul VI. The archdiocese's territories came from the Juneau Diocese. It currently covers 138,985 square miles in south-central Alaska. The estimated Catholic population is 24,115 out of a total population of about 481,000 -- which accounts for nearly two-thirds of the population of the entire state of Alaska.

When he was introduced to Juneau Catholics as their new bishop July 11, 2017, Bellisario said that in his letter of acceptance to Francis on that appointment, he shared the words of St. Vincent de Paul, who founded the religious order to which he belongs: "St. Vincent told the members of what he called his little company ... 'Let us love God, my brothers. Let us love God but let it be with the sweat of our brows.'"

He also said it has been a joy to live the Vincentian charism that is "burning in my heart."

"The call to serve the poor, vulnerable, refugees, seniors, prisoners, the sick, the addicted, the lonely, the depressed, the homeless and the forgotten is the call of the church," he explained. "It is what we do and it is what we do together. It is that which unites us in Jesus Christ."

Bellisario has spoken of his upbringing in Southern California by Depression-era parents, who came to the U.S. from Italy. He said his parents, Rocky and Mildred, stressed the importance of helping others who were less fortunate.

As immigrants, his parents "were treated unfortunately the way that immigrants are treated today," he said, adding that their devotion to the Catholic faith helped inspire his vocation to the priesthood as a Vincentian.

A native of Los Angeles, then-Father Bellisario served on the staff of St. Vincent's Seminary in Montebello, California, after his ordination to the priesthood. He was assistant dean of students and then dean of students.

He served in parish ministry in California from 1986 through 1998 before becoming director of the De Paul Evangelization Center in Montebello. In 2002, he began an eight-year period as superior of the Vincentians' Province of the West.

Beginning in 2003, he also took on added responsibilities as director of the Daughters of Charity of St. Vincent de Paul, Province of Los Altos Hills, California. In 2015, the future bishop headed north to Alaska to serve as superior of the International Mission of the Vincentians and parochial vicar of St. Anthony Parish in Anchorage. After a year he became pastor of Our Lady of Guadalupe Co-Cathedral in Anchorage. Then in 2017, he was named to head the Juneau Diocese.

In February 2020, then-Bishop Bellisario made his "ad limina" visit to the Vatican for his episcopal region along with his fellow prelates from Alaska, Washington, Oregon, Idaho and Montana.

He was the principal celebrant and homilist at an early morning Mass Feb. 4 at the Basilica of St. John Lateran in Rome.

In his homily, he said bishops must follow the path set by Christ and place service above the prominence of their positions.

In Alaska, the other diocese is Fairbanks, headed by Bishop Chad W. Zielinski. The Fairbanks Diocese, established July 27, 1894, covers over 409,000 square miles of Alaska's northern region, or about two-thirds of the entire state. It has 13,500 Catholics. Fairbanks is the largest U.S. diocese geographically.