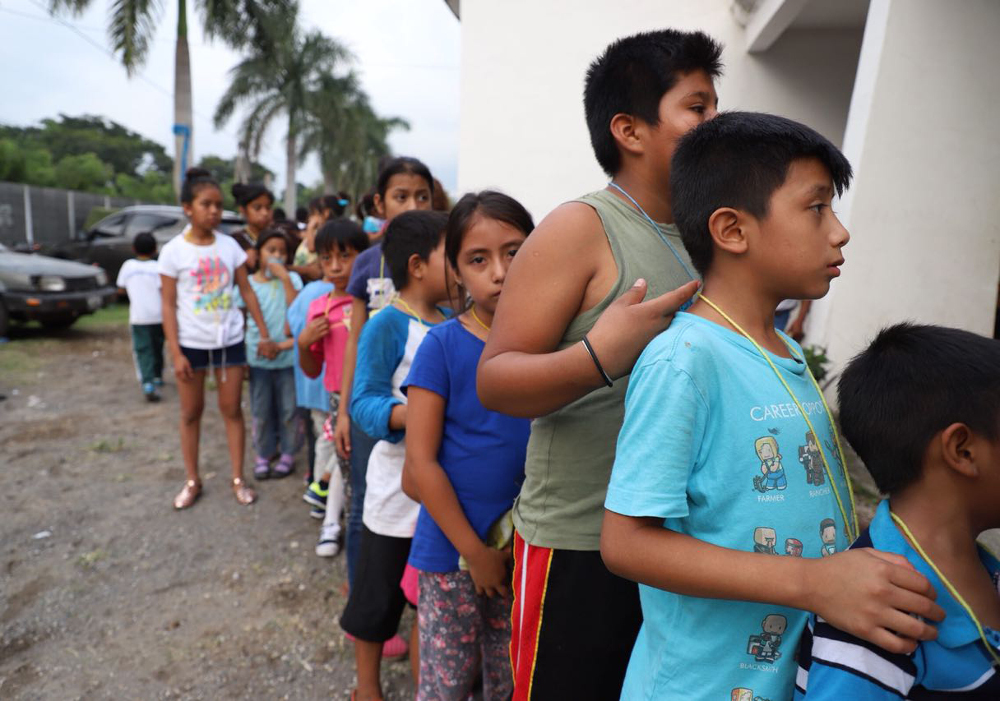 Children wait in line at a shelter in Escuintla, Guatemala, June 4. The eruption of the nearby Volcano of Fire a day earlier killed at least 69 people. (CNS/courtesy Ivan Palma, CRS)

In a June 5 telegram addressed to Archbishop Nicolas Thevenin, apostolic nuncio of Guatemala, Cardinal Pietro Parolin, Vatican secretary of state, said the pope was "profoundly grieved upon learning the sad news of the violent eruption of the 'Volcan de Fuego' ('Volcano of Fire')."

The June 3 eruption buried entire towns in a thick blanket of ash and debris, causing hundreds to flee the toxic fumes. Although the death toll was at 69 people June 5, authorities believed many more may still be buried under the volcanic rubble.

According to the Vatican newspaper, "L'Osservatore Romano," Guatemala's National Institute of Forensic Studies said only 17 victims had been identified as of June 5. Scientists will have to rely on DNA to identify victims disfigured by burning embers and hot lava.

Firefighters and volunteers were forced to use wooden planks to walk around after the soles of their shoes were melting because of the intense heat, CNN reported June 5.

Pope Francis offered "prayers for the eternal rest of the deceased and for all who suffer the consequences of that natural disaster."

Parolin said Pope Francis hoped that families mourning the loss of their loved ones may be consoled and expressed "his spiritual closeness to the wounded and those who work tirelessly in helping the victims."

Meanwhile, Catholic agencies and parishes quickly responded after the eruption by providing shelter and emergency supplies.

He said residents from the affected communities had "lined up all day" June 4 at shelters and collections centers for food and basic needs. "Many of them were missing family members," he said.

"More help will be needed in coming days, especially once we know the extent of the impact," Sanchez continued. "At one of the shelters, the number of people had doubled by Monday night (June 4) and the number of deaths is increasing. Affected communities face the drama of losing family.

"I talked to a woman with three daughters, one of them a newborn barely 27 days old. They, along with her three nieces, survived. Her sister and husband were buried in the eruption. There will be many orphans and widows," Sanchez said.

CRS continued to work with government and local responders as well as Caritas Guatemala, he added.