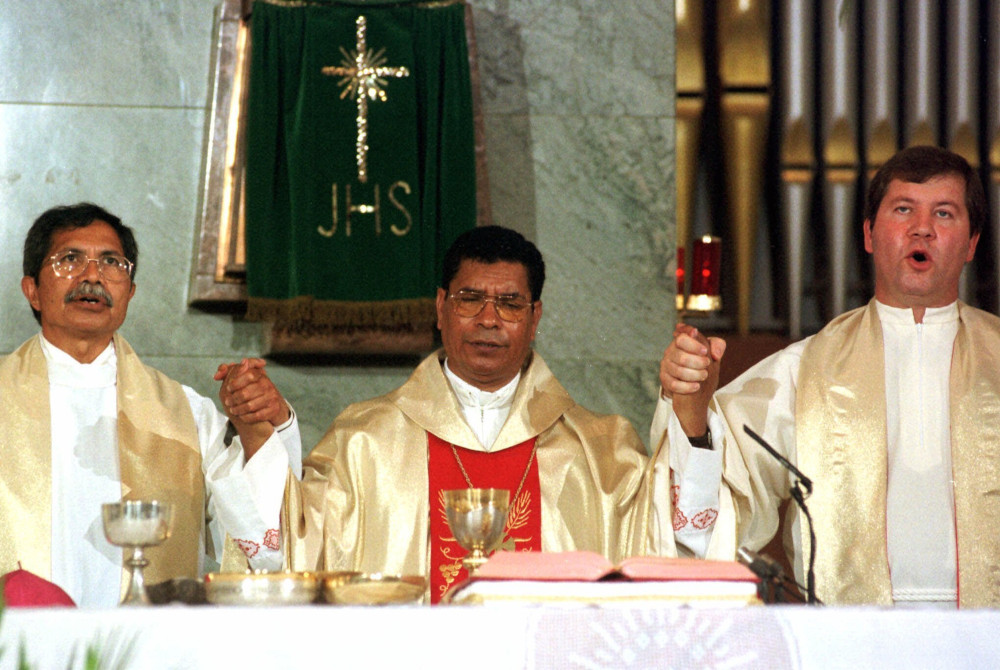 East Timor's Roman Catholic Bishop Carlos Ximenes Belo, center, holds hands with other priests during the Sunday's morning mass at Lisbon's Salesian religious order's church, on Sept. 12, 1999. Belo has been accused in a Dutch magazine article of sexually abusing boys in East Timor in the 1990s, rocking the Catholic Church in the impoverished nation and forcing officials at the Vatican and his religious order to scramble to provide answers. (AP Photo/Gael Cornier, File)

Clergy sexual abuse cases are casting a pall over the Catholic Church in Portugal, ensnaring senior officials even as authorities scramble to explain why shelter was given to a Nobel Peace Prize-winning bishop at the center of sexual misconduct allegations.

Senior Catholic leaders apologized over the weekend for the hurt caused by decades of alleged abuse and cover-up — current estimates number around 400 cases — with the archbishop of Lisbon begging the faithful to not lose faith in the church.

“Be confident that for our part we will do our best, with respect to the law and the Gospel,” Archbishop Manuel Clemente said after Sunday Mass.

A spotlight fell on Portuguese church authorities, as well as the Vatican, last week when the Holy See’s sex abuse office confirmed a Dutch media report that in 2020 it had secretly sanctioned Bishop Carlos Ximenes Belo, the revered independence hero of East Timor, a small former Portuguese colony in East Asia. Belo, who has been living in Portugal, won the Nobel Peace Prize in 1996.

Other unwelcome revelations for the Portuguese church have piled up in recent days, just as Portugal seeks to gain momentum for its hosting of World Youth Day next year in Lisbon. Pope Francis is due to attend the event, which is a major occasion on the Catholic calendar.

Portugal’s attorney general’s office confirmed to The Associated Press on Oct. 3 that the head of the Portuguese Bishops Conference, Bishop José Ornelas, is being investigated on suspicion he covered up for abuser priests in Mozambique, a former Portuguese colony.

Ornelas, who presides over Portugal’s world-famous shrine at Fatima, has denied any misconduct or wrongdoing and has promised to cooperate with any investigation, but the inquiry added to the pressure on Portuguese church authorities.

Ornelas flew to Italy at the weekend for a private meeting at the Vatican with Francis, who also received his ambassador to Portugal. The Vatican provided no details about the meetings.

Ornelas’ visit to the pope came two months after the archbishop of Lisbon, Clemente, went to meet the pontiff amid a deluge of allegations of child sex abuse by priests and alleged cover-ups by senior members of the Portuguese church.

The scandals have come against a backdrop of revelations published by a lay committee looking into historic church sexual abuse cases in Portugal. Since January, it has unearthed around 400 alleged cases. Previously, church officials had said they knew of only a handful of cases.

On Saturday, the diocese of Braga in northern Portugal issued an apology for the “pain and suffering” caused by allegations of sexual abuse leveled against a local priest by men and women in the area. The abuse allegedly occurred in the 1990s, and victims complain that nothing happened after they sounded the alarm after the turn of the century.

Many unanswered questions remain about Belo's time in Portugal. The Salesian missionary order to which he belongs said it took him in at the request of its superiors. His current whereabouts are unclear.

The Vatican prohibited Belo from having contact with minors or with East Timor, based on misconduct allegations that arrived in Rome in 2019.

The East Timor Embassy in Lisbon didn’t immediately respond Oct. 3 to a request for comment on a Portuguese media report that, following last week’s revelations, it picked him up from a Salesian property in Lisbon and took him to an undisclosed location.

Belo has said he retired in 2002 for health reasons and to give the newly independent East Timor different church leadership. But within a year of his retirement, Belo had been sent by the Vatican and the Salesians to Mozambique to work as a missionary priest. Portugal maintains close ties with the African country.

There, Belo has said, he spent his time “teaching catechism to children, giving retreats to young people.”

The United Nations and advocates for victims have called on Francis to authorize an investigation into the circumstances surrounding Belo's 2002 retirement, when he was 20 years shy of the normal retirement age, and why he was sent to Mozambique.

A version of this story appeared in the Oct 14-27, 2022 print issue under the headline: Portugal abuse cases mount amid questions over Nobel bishop.