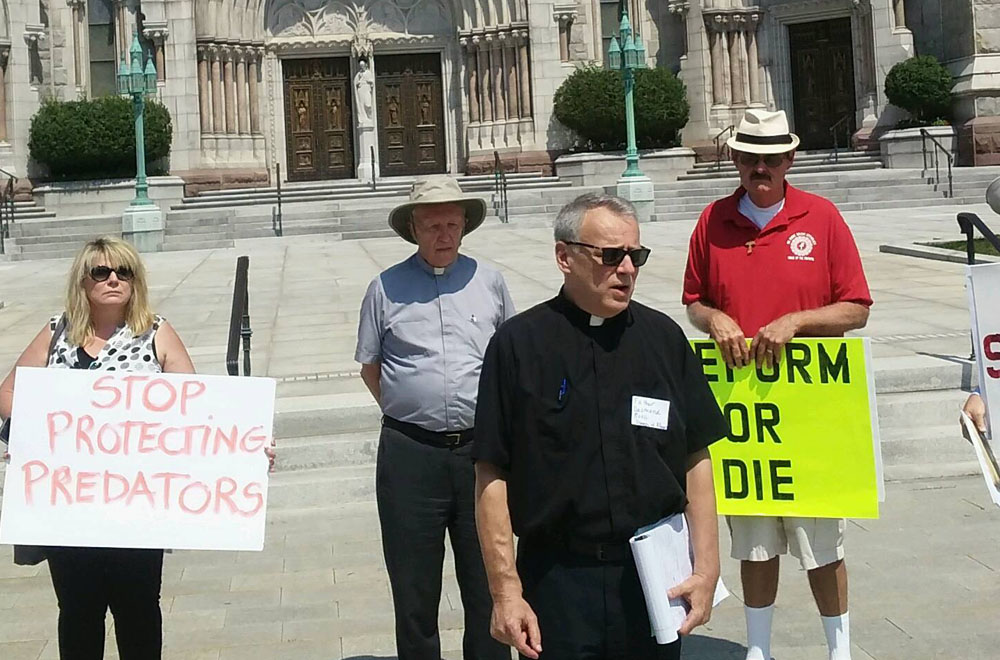 On the day after it was announced that his alleged assailant was relieved of parish duties, Fr. Desmond Rossi led an Aug. 29 prayer demonstration in front of the Sacred Heart Basilica Cathedral here, calling upon the church to reform in the aftermath of the sex abuse crisis.

Among the dozen or so attendees was Cardinal Joseph Tobin of Newark, who told the group, "We have to smash the structures and culture that make abuse [in the church] possible."

Rossi, a priest of the Diocese of Albany, New York, returned to the Newark Archdiocese to call for an overhaul of how the church deals with sex abuse. Last month he announced that he was sexually assaulted by two fellow seminarians in 1988 while serving in the archdiocese.

One of his alleged assailants is deceased; the other, Fr. James Weiner, was to be installed in September as pastor of St. Andrew Parish in Westwood, New Jersey, where he has been serving as administrator for the past eight months. While an archdiocesan review board concluded that the charges were credible but unsubstantiated, Tobin agreed to reopen the case and Weiner was relieved of his duties.

"It took me a long time to connect the dots of what happened to me," said Rossi, who told the gathering that he fled the Newark Archdiocese and was ordained for Albany. He spent 17 years on leave from that diocese, returning to ministry four years ago. He is now associate pastor at St. Mary's Church in Glens Falls, New York.

Rossi said he was anxious to cooperate in an internal investigation recently announced by Seton Hall University into sex abuse charges at Immaculate Conception Seminary School of Theology there, and with a proposed Vatican-sponsored investigation into the charges directed against McCarrick, who served as archbishop in Newark and Washington, D.C. 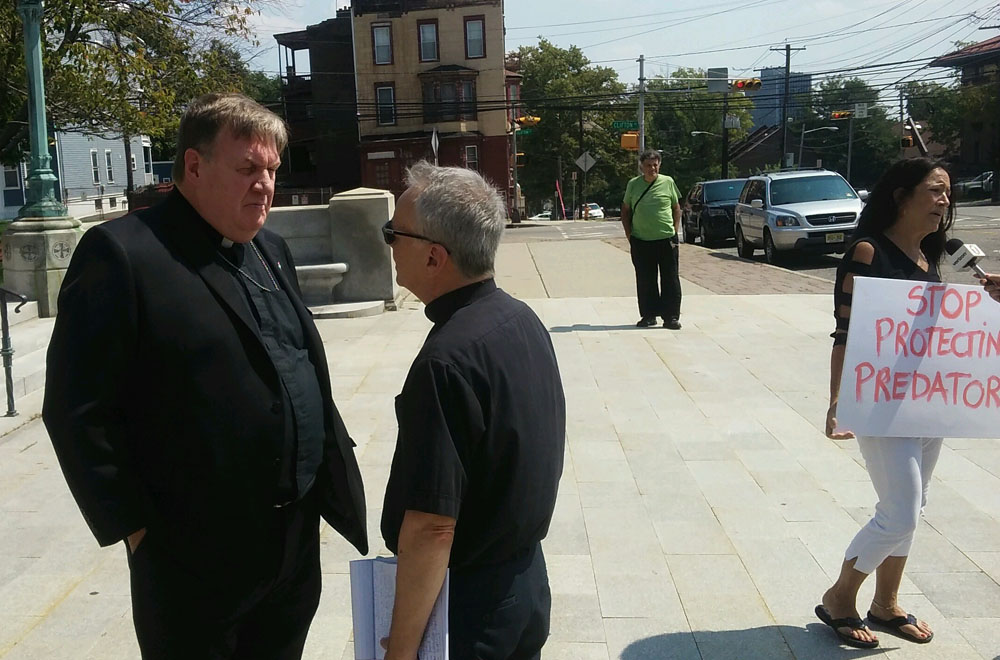 Tobin said he came to the event, which included a short prayer service outside the cathedral, because "it was a chance to put a face" on those who have accused the archdiocese of inaction in the past.

"I wanted to listen," he said.

He said that laypeople need to emerge in leadership roles in the church to deal with the crisis. Asked if he knew about sex abuse charges leveled against McCarrick before charges of abuse against a minor and harassment of seminarians became public this summer, Tobin said he had spent most of the past two decades in Rome and did not know of any clouds hanging over his predecessor.

When he was made archbishop of Newark in early 2017, "I confess it never dawned on me to ask if there were any accusations against my predecessors."

"To me it was far-fetched to ask. Shame on me," said the cardinal.

In a short interview with NCR, Tobin said that the U.S. bishops need to operate with "maximum transparency." He said that those who blame the crisis on homosexuals in the priesthood have created "a red herring," and that studies — such as one by John Jay College commissioned by the U.S. bishops — have argued that gay priests are no more likely to engage in abusive behavior than their straight counterparts.

"There have always been gay priests," said Tobin. Sexual abuse in the church, he said, is a product of clericalism and a lack of mature psychological development among clergy abusers. While he said the church should be willing to explore a married clergy, that discussion should take place separate from the issue of sex abuse.

Even with the presence of Tobin, activists at the event who have long criticized the archdiocese kept it up. 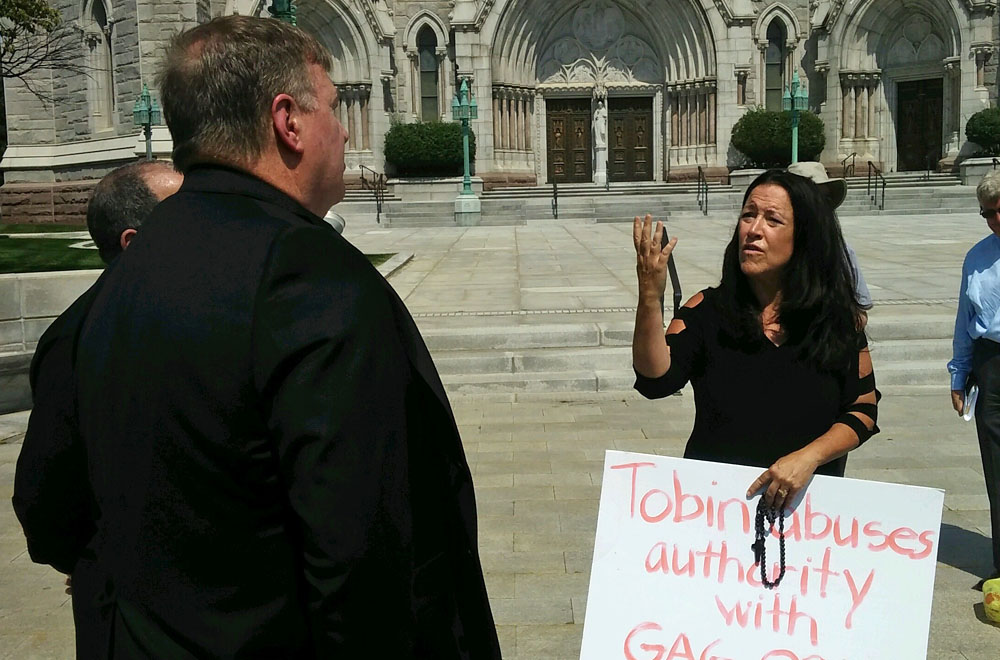 Bob Hoatson, a former Newark priest and now co-director of a group dedicated to helping sex abuse survivors, said that he had raised the issue in 2006 of why Weiner was allowed to operate as a pastor with Archbishop John Myers, Tobin's immediate predecessor.

"It was outrageous to me that these two men were still in ministry," said Hoatson, referring to the two accused assailants named by Rossi.

Two parishioners of St. Andrew participated at the event, but did not want their names used. They both said parish opinion is divided on whether Weiner should have been allowed to stay.

"In the past eight months he has endeared himself to people in the parish," said one parish leader. But he said that the entire church needs to "at some point rip the bandages off" about what has been known about accused priests.

Rossi, who is awaiting a new hearing which he said will include new evidence substantiating his claims, said that removing Weiner as pastor was a positive step. He said he hopes that his accused assailant will be evaluated and returned to a supervised ministry after completing therapy.