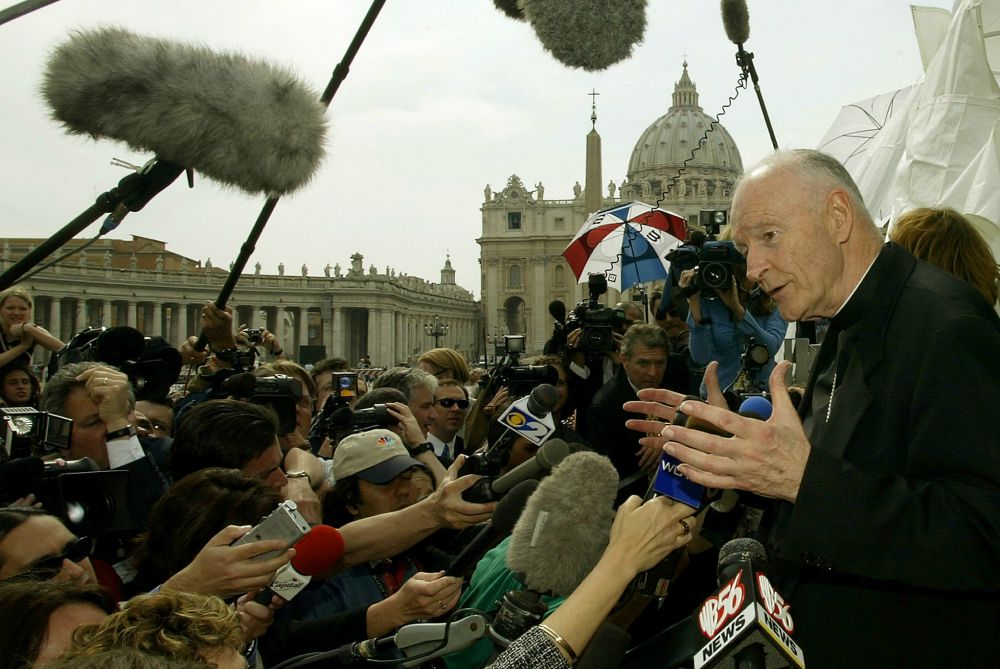 Then-Cardinal Theodore McCarrick faces the press near St. Peter's Basilica at the Vatican April 24, 2002. U.S cardinals met for a summit with Pope John Paul II at the Vatican April 23-24, 2002, as the sex abuse crisis unfolded in the United States. McCarrick was a key spokesman for the bishops during the summit. (CNS/Reuters/Paolo Cocco)

In late April of 2002, Pope John Paul II summoned all the American cardinals to Rome for an emergency meeting to discuss the "American problem" of the sexual abuse scandal. It was dominating news coverage in the United States, and the bishops' meeting in Dallas that June would be covered live on national television. Nothing much happened in Rome. The pope addressed the cardinals. A statement full of platitudes about concern and condemnation was issued. But no real accountability.

When the cardinals returned home, only one, Theodore McCarrick, had the courage to make himself available to the press. I was impressed. At least he seemed to "get" the gravity of the situation. At least he was willing to take questions.

When McCarrick came back from Rome, he summoned all the priests of the Archdiocese of Washington, D.C., to a mandatory meeting at the Franciscan Monastery near the Catholic University of America in Washington. We were eager to go. It would be our first chance to discuss the clergy sexual abuse scandal with our archbishop. There were over 200 priests present.

The meeting lasted more than two hours. For the first hour, the press was present in the room. The cardinal made a long statement and took a few questions from the reporters. Then the press and the archdiocesan lay staff were ushered out. Only the priests remained in the room with the cardinal and our auxiliary bishops.

It was a typical hierarchical meeting. The cardinal and bishops sat up front. McCarrick came to a microphone and spent a long time discussing what would become known as the "Dallas charter" (Charter for the Protection of Children and Young People), which prescribed how priests were to be treated henceforth, when accused of sexual abuse of a minor. The charter would be discussed in the bishops' meeting in Dallas, and McCarrick was on the committee drafting it. It set up review boards and child protection offices. It prescribed an "audit" to be carried out by the John Jay College of Criminal Justice* to determine the scope of the situation. There was a mechanism to handle accusations against priests and a "zero-tolerance" policy. But there was no oversight for bishops.

In his statement, McCarrick gave us all the usual hierarchical perspectives on the scandal: The problem is serious but not as bad as they say. The press is anti-Catholic. Zero tolerance puts innocent priests at risk and takes away bishops' discretion. Bishops cannot be accountable to anyone but Rome. Every bishop is autonomous in his own diocese, so they can't be accountable to each other.

After his statement, he opened the meeting up to "questions." There were a couple of softball questions. I waited my turn at one of the microphones, frustrated that we were not dealing with the real problems. I remember it vividly. I had made notes on a legal pad. I was nervous as a cat. When my turn came, I was visibly shaking.

I started, "Today Cardinal [Bernard] Law [of Boston] is answering a subpoena for a deposition in a civil law suit in the sexual abuse scandal in Boston. Instead, he should be answering an indictment for suborning the felony of child molestation."

McCarrick looked shocked. There was a sort of inward taking of breath among the presbyterate. I remember that my voice quaked and my hands shook so much that I could not read my notes.

I went on to address the Dallas charter and its zero-tolerance policy. I noted that the charter held priests to strict account, but there was no accounting for bishops, archbishops or cardinals. They were exempted, I said, and they shouldn't be. We should all be held accountable to the civil law, to public scrutiny and to our people.

Then I added angrily, "Our people understand sin. Everybody sins. What they don't understand is cover-up and the failure to protect our children. Everybody, including cardinals, should be held fully accountable."

McCarrick was clearly uncomfortable with my pointed reference to cardinals and with my emotion. He interrupted me and said, "I'm not sure that this is the time and place for us to have this discussion."

I shot back at him immediately. I still remember my answer word for word.

"If a closed meeting with our brother priests, in the midst of the worst scandal to hit the American church, is not the time and place to have this discussion, THEN YOU TELL ME THE TIME AND PLACE AND I WILL BE THERE!"

I sat down, shaking.

Only one priest, Fred MacIntyre, a late vocation and a retired government contractor, stood up to defend me. Everybody else was silent. There were a couple more statements. Then the meeting was over.

Afterward, in the parking lot, a few priests came over to me and said basically, "That was good what you said in there." My reply, "Why didn't you say something?"

In retrospect, we now know why McCarrick was so uncomfortable with a demand for accountability for bishops and cardinals. He was aware of his own behavior. At the time, we knew nothing about his abuse of minors. For us, the issue was the way bishops had transferred child molesters around from parish to parish in an apparent cover-up. I thought he was nervous about that.

Recently, there has been some movement on the question of episcopal accountability. My own archbishop, Cardinal Donald Wuerl, has called for a commission of bishops to review brother bishops and report their findings to Rome. Cardinal Daniel DiNardo, president of the bishops' conference, says the Vatican will be invited to lead a "full investigation" into questions still surrounding McCarrick. They will be studying ways to make it easier to report abuse and misconduct by bishops as well as better procedures to resolve complaints made against bishops, with a pledge that laity will have leadership roles in all this. Some writers have been talking about "system failures" that make bishops unaccountable.

All these suggestions are helpful but, in my opinion, are too little too late. The damage is done. The church has no credibility on its ability to police itself. Just look at the church in Ireland.

McCarrick is a product of the clerical system. He is a lifer, who entered the seminary at 14. To him, the church is everything: mother, father, teacher, provider and protector. The church gives education, position, power, wealth and prominence to us priests and bishops. Many on the inside think that it must be protected at all costs.

The guys at the top especially think they deserve to be protected. This is not surprising. It is the way of bureaucracy. Institutions generally protect themselves.

My confrontation with McCarrick was a defining moment in my relationship to the hierarchy. Since then, I don't believe in their wisdom or their virtue as a group. I see most bishops as careerists, interested in protecting their own turf and control.

What was clear to me from my confrontation with McCarrick back in 2002 was that there never would be a time or place to discuss the problem of the accountability of bishops.

That is the problem.

Author's note: This is the second of three columns I plan to write on the scandal associated with the McCarrick revelations. The next column is about my confrontation with McCarrick over the sex abuse scandal.

Editor's note: We can send you an email alert every time Fr. Peter Daly's column, Parish Diary, is posted to NCRonline.org. Go to this page and follow directions for: email alert sign-up.

Correction: An earlier version of this article incorrectly identified the John Jay College of Criminal Justice as a law school.

Read this next: With McCarrick scandal, #MeToo arrives for the church