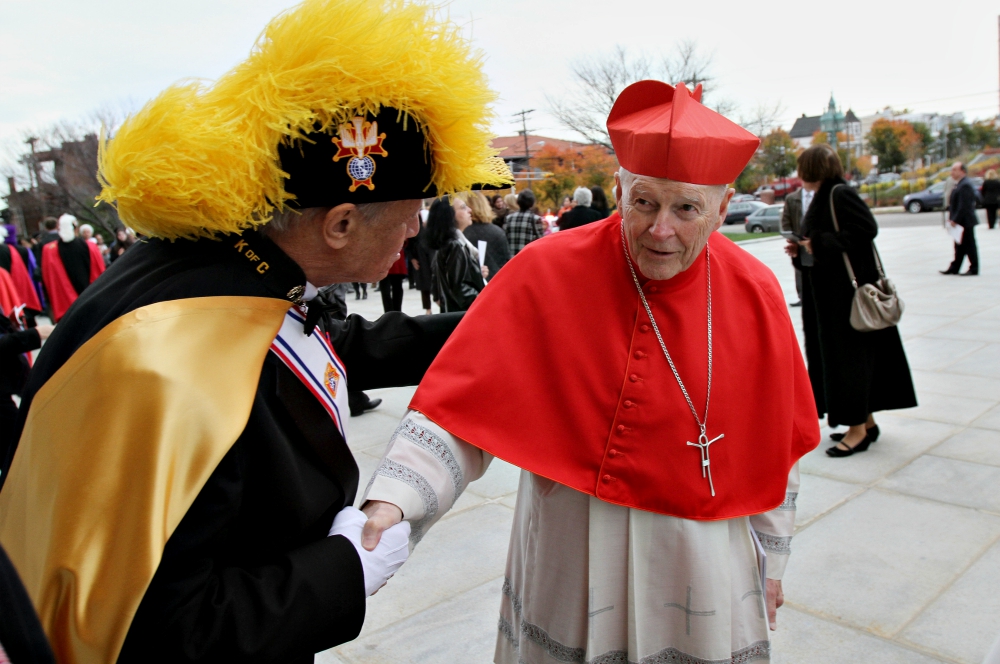 A Knight of Columbus greets then-Cardinal Theodore McCarrick, retired archbishop of Washington, at the Cathedral Basilica of the Sacred Heart in Newark, New Jersey, in 2013. (CNS/Gregory A. Shemitz)

On July 28, we woke up to front-page news about my former archbishop Theodore McCarrick's resignation from the College of Cardinals. He is the first and only cardinal to resign from the college as a part of the worldwide sexual abuse scandal. While two of McCarrick's victims were minors, it appears that most were adult males. Most often, they were seminarians and priests under his authority. In McCarrick, the child abuse scandal is joined to the #MeToo movement.

It is painful to the whole church to hear the news about McCarrick. It is especially painful to the people of my own archdiocese, Washington, D.C. I have no desire to add fuel to the fire. I always liked McCarrick and appreciated his leadership on many things, especially on social justice issues. But I do have a few things to say about McCarrick and the related scandal, some of them from my personal experience.

First, we knew, or should have known, about some of McCarrick's behavior.

We may not have had firsthand knowledge, but the scandal about McCarrick was no secret. The revelations of the last few weeks were not a total surprise to anyone who was paying attention.

All anyone had to do was "Google" McCarrick's name. Up pops numerous accounts of accusations on websites and blogs — many are years old. Some are not very credible, but some were credible and detailed.

For instance, in 2010, the psychologist and former priest Richard Sipe posted an essay on his blog about priests, celibacy and sexuality titled, "The Cardinal McCarrick Syndrome." His statement was addressed to Pope Benedict XVI.

Sipe discussed McCarrick's predatory behavior toward priests and seminarians while McCarrick was bishop of Metuchen, New Jersey, and archbishop of Newark, New Jersey. Sipe quoted from documents he had obtained in legal settlements with the Newark Archdiocese. He writes, "Notes reveal that it was the custom the Archbishop McCarrick to call his protégés 'nephew' and encouraged his entourage to call each other 'cousin' and for them to call him 'uncle Ted.' "

Priests in our archdiocese dismissed some of this information as mere rumor and the people who repeated the rumors as scandalmongers. But we knew the rumors had a ring of truth about them. We saw the cardinal refer to his nephews in his columns in the diocesan press, and we knew that there were no nephews. McCarrick was an only child.

Now Cardinal Joseph Tobin of Newark and Bishop James Checchio of Metuchen, McCarrick's first diocese, have revealed that their dioceses settled claims against McCarrick in the mid-2000s for actions early in his career. Why was nothing said? Why was McCarrick promoted if there was documentary evidence in his file that he was a sexual predator?

Apparently, Pope John Paul II didn't care. Remember that John Paul also shielded the founder of the Legionaries of Christ, Fr. Marcial Maciel Degollado, a sexual predator who for years preyed on seminarians in the order he founded. The real sin of McCarrick and Maciel was abuse of their power to gain sex.

To his credit, Benedict seems to have cared more about such abuse of power. He removed Maciel from the clerical state. Benedict also immediately accepted McCarrick's resignation on the cardinal's 75th birthday (the mandatory retirement age) back in 2006. Often popes have kept cardinals in place for a long while after their 75th birthdays. Evidently, Benedict knew that this was a guy he needed to get out.

Sipe had also written to Benedict in 2008 to tell him that several seminarians had come to Sipe when he was a seminary professor at St. Mary's Roland Park in Baltimore. They reported that McCarrick (then bishop of Metuchen) took seminarians to his beach house at the Jersey shore and pressured them to sleep with him. Again, that they were encouraged to call him "Uncle Ted."

I heard the rumors about McCarrick in January 2001, the night before he was installed as archbishop of Washington. I found myself in line next to a priest from Newark as we processed into the cathedral for the evening prayer. He told me, "Don't go down to the shore with McCarrick." The clear implication was that the archbishop put sexual pressure on priests and seminarians. I dismissed it as mere gossip. Only six weeks after McCarrick was installed as our archbishop, John Paul II named him a cardinal.

I am incredulous when I hear archdiocesan officials here in Washington say they had no idea about any of this scandal. Was there no communication with the dioceses of Metuchen and Newark? Was there no communication with the papal nuncio? There was documentary evidence in McCarrick's file. Both dioceses had reached cash settlements with his victims.

Are we to believe that nothing was said to the Washington Archdiocese, where McCarrick was living and working? If nothing was said, then something is radically deficient in the church's communication and accountability for bishops.

How is it that all these stories could be on the internet, in the press, and in personnel files and McCarrick was still promoted?

The information was out there, but we chose to ignore it for three reasons.

First, we thought that McCarrick's sexual targets were all adults, who should be able to defend themselves. We did not hear about the child victims. Moreover, by the time McCarrick came to Washington, he was 70 years old. His worst behavior was behind him. Most of those rumored incidents were in the past. We really did not deal with the question of abuse of power when a bishop puts sexual pressure on his subordinates. The #MeToo movement has made us all more sensitive to that issue.

Second, we were afraid. We were convinced that speaking up against such a powerful and popular archbishop would be useless. He was connected to many people. He knew everybody. He was a prodigious fundraiser, especially for the Vatican. He was the co-founder of the Papal Foundation, which funneled money to Rome. Nobody wanted to kill the goose that laid the golden egg. He was a big deal everywhere. He could ruin you if you spoke out. If you shoot for the king, you better not miss.

Third, we liked McCarrick. Everybody liked him. He was a likeable guy. As one parishioner of mine said, "He was the sort of guy you would want to go to a ballgame with."

The secular press lionized him. He was a frequent guest on Sunday morning talk shows, like "Meet the Press." The Washington Post quoted words about his "humility" when he retired. Michelle Bornstein wrote in the Post in 2006 that he was approachable and civil. George Weigel said that McCarrick had an "Irish uncle personality. He was enormously popular."

We just didn't want to believe the rumors, because we liked Teddy McCarrick.

So now he has resigned as a cardinal in disgrace.

The Vatican has said he may no longer function publicly as a priest. Now he must live a life of prayer and penance in seclusion. That is not enough.

There should be full accountability, not only for him but also for the whole process of selecting and promoting bishops. It is deeply flawed. It is a classic old boys' network that rewards its cronies.

People in the Congregation for Bishops, the Vatican embassy and various diocesan offices should be made to say what they knew and when about McCarrick. Files should be subpoenaed to preserve the records before they are destroyed.

There will be other symbolic punishments. McCarrick's name has already been removed from the Catholic Charities Family Center that he purchased when he was archbishop. He will not be buried in the cathedral with the other archbishops of Washington. His red hat will not hang from the cathedral ceiling. The Catholic University of America and Fordham University have already withdrawn honorary degrees they gave to him.

As The Washington Post said in an editorial on July 26, "There should be a complete accounting of what happened, a reckoning for any who were complicit and cooperation with any civilian criminal investigations." (An echo of the NCR editorial.)

McCarrick skated through life on his charm, popularity, glibness, fundraising skill and political savvy. There must be an accounting for his behavior, especially with children.

Author's note: This is the first of three columns I plan to write on the scandal associated with the McCarrick revelations. The next column is about my confrontation with McCarrick over the sex abuse scandal.

Editor's note: We can send you an email alert every time Fr. Peter Daly's column, Parish Diary, is posted to NCRonline.org. Go to this page and follow directions: Email alert sign-up.

Read this next: Confrontation time: Cardinal McCarrick and me in 2002
A version of this story appeared in the Aug 24-Sept 6, 2018 print issue under the headline: With McCarrick scandal, #MeToo arrives for the church.