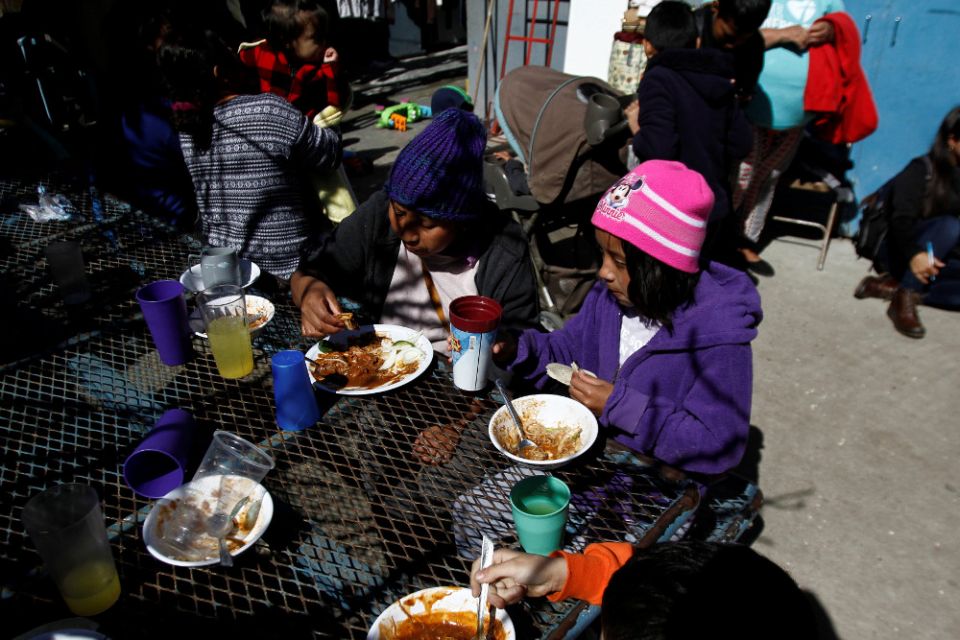 Central American migrants eat a meal while waiting for their asylum requests to be processed at a shelter in Tijuana, Mexico, Feb. 19, 2019. (CNS/Jorge Duenes, Reuters)

Washington — The chairman of the U.S. bishops' migration committee and the president and CEO of Catholic Relief Services March 13 joined Texas and Mexico bishops in opposing the U.S. policy of sending asylum-seekers back to Mexico while they wait for court proceedings.

"We urge the (Trump) administration to reverse this policy, which needlessly increases the suffering of the most vulnerable and violates international protocols," said Bishop Joe Vásquez, of Austin, Texas, chairman of the U.S. Conference of Catholic Bishops' Committee on Migration, and Sean Callahan of Catholic Relief Services, the U.S. bishops' overseas relief and development agency.

"We steadfastly affirm a person's right to seek asylum and find recent efforts to curtail and deter that right deeply troubling," they said. "We must look beyond our borders; families are escaping extreme violence and poverty at home and are fleeing for their lives."

On March 4, U.S. and Mexican bishops from both sides of the border issued a joint statement expressing "total disagreement" with what is being called the "Remain in Mexico" policy. It was signed by nine U.S. bishops and five Mexican bishops.

They said the protocols undermine migrants' right to seek asylum in the U.S. and deprives them of the support of family in the U.S., and perhaps is leading Mexico to organize refugee camps for tens of thousands.

In a Feb. 26 letter, 500 religious organizations and leaders asked Homeland Security Secretary Kirstjen Nielsen for an immediate end to the policy.

Secretary of State Mike Pompeo announced the policy Dec. 20, saying it is provided for under Section 235(b)(2)(c) of the Immigration and Nationality Act.

He said the U.S. government notified Mexico's government it was invoking that section, a move he said was necessary "to confront the illegal immigration crisis facing the United States."

"Individuals arriving in the United States from Mexico — illegally or without proper documentation — will be returned to Mexico for the duration of their immigration proceedings," Pompeo said in a statement. "In response, the Mexican government has informed us that it will support the human rights of migrants by affording affected migrants humanitarian visas to stay on Mexican soil, the ability to apply for work, and other protections while they await U.S. proceedings."

In their statement, Vásquez and Callahan said Catholic Relief Services staff and the agency's partners in Central America "witness the suffering there and fight against it."

"Our government must adopt policies and provide more funding that address root causes of migration and promote human dignity and sustainable livelihoods," they said. "Like the Texas-Mexico border bishops, we recommit to Pope Francis' call to welcome, protect, promote and integrate our immigrant brothers and sisters in Christ."