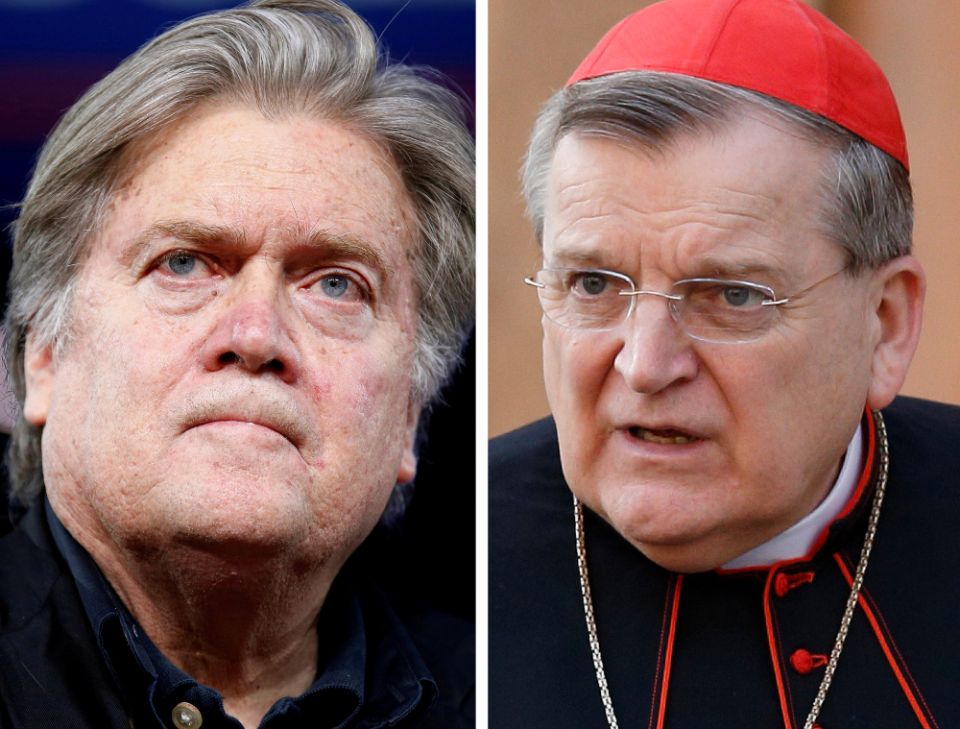 Steve Bannon, former White House chief strategist, and U.S. Cardinal Raymond Burke are seen in this composite photo. Burke has resigned from the Dignitatis Humanae Institute, saying it has become "more and more identified with the political program" of Bannon. (CNS/Paul Haring and Joshua Roberts, Reuters)

Vatican City — U.S. Cardinal Raymond Burke has resigned from the Dignitatis Humanae Institute, saying it has become "more and more identified with the political program" of Steve Bannon.

In a letter posted on his Twitter feed, Burke said June 25 he had urged the institute to return to its original purpose of promoting the respect of human dignity but "it has not done so," so he was terminating his relationship, including being the institute's honorary president. Eleven other cardinals make up the institute's advisory board and Bannon, former chief strategist at the White House, is a patron and member of the board of trustees.

"I have been made aware of a June 24 LifeSiteNews online article — now removed — entitled 'Steve Bannon hints at making film exposing homosexuality in the Vatican,' in which the insinuation is made that somehow, through my association with Mr. Benjamin Harnwell of the Dignitatis Humanae Institute, I was involved in a meeting between Mr. Bannon and Mr. Frederic Martel, author of the book, 'In the Closet of the Vatican,' to promote a film version of Mr. Martel's book," Burke said in his letter.

"LifeSiteNews made no contact with me to verify my possible involvement," he said. "Given the overall content of the article and given several statements made by Mr. Bannon in the article, I must make the following clear:

"I do not, in any way, agree with Mr. Bannon's assessment of the book in question," Burke said. "Furthermore, I am not at all of the mind that the book should be made into a film. I disagree completely with a number of Mr. Bannon's statements regarding the doctrine and discipline of the Roman Catholic Church.

"Above all, I find objectionable his statement calling into question the church's discipline of perpetual continence for the clergy, in accord with the example and desire of Christ ..." he said.

Burke said he had never worked with Bannon but had met with him "on occasion to discuss Catholic social teaching regarding certain political questions."

"In meeting with him, as in meeting with other political leaders, I have tried to fulfill my mission as a priest to teach the faith and morals for the common good," he said.

LifeSiteNews issued a statement expressing regret for "any harm to His Eminence that may have come from our mentioning his name."

"We did not think to contact Cardinal Burke to verify the story because it had nothing to do with him," the statement said.

In early June, the Italian ministry for culture revoked a license it granted to the Dignitatis Humanae Institute to manage a state-owned historic monument south of Rome, citing irregularities in the bidding process and a breach of contract. The former Carthusian monastery of Trisulti was being used as the headquarters of the institute.