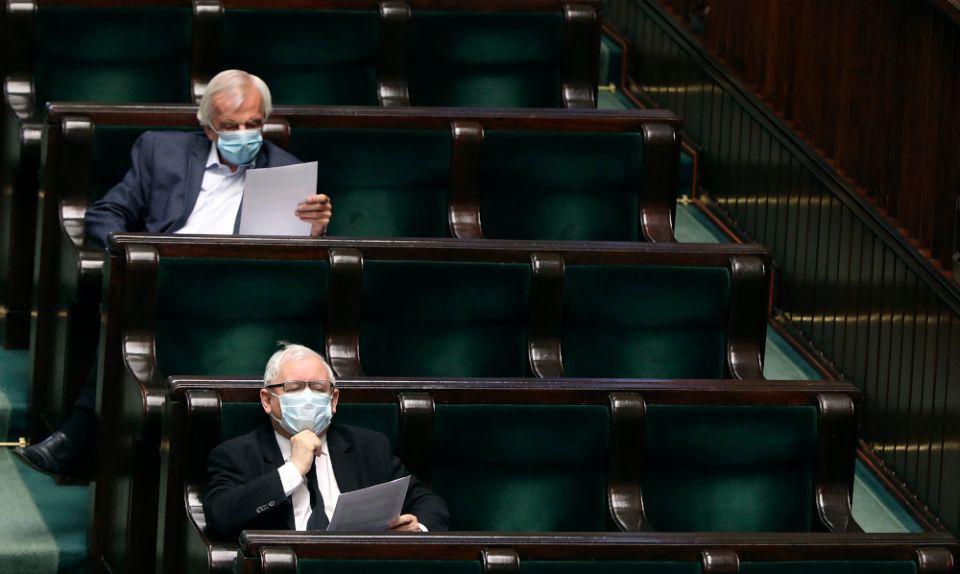 Warsaw, Poland — Polish lawmakers on April 16 postponed a final decision on controversial proposals to impose a near-total ban on abortion and criminalize school sex education in the predominantly Catholic country, in a move that could lead to the draft laws being mothballed.

Polish and international human rights organizations had strongly condemned the proposals, brought by a Catholic group. Poland's conservative government was also criticized for bringing the deeply divisive issues to parliament at a time when pandemic restrictions on public gatherings would prevent a repeat of the mass protests that killed similar proposals in the past.

Some women still protested against the abortion bill in Warsaw and elsewhere this week, wearing masks, and United Nations experts urged Poland to reject the proposal that bans abortions even for fetuses with health problems so severe that they would be unlikely to survive.

Lawmakers voted 375-68 April 16 to send the proposed abortion law to two committees for further discussion, a process that could take months or even years. There was no decision on when, or whether, the draft law would be reintroduced to parliament for a final vote.

Also a draft bill that would criminalize sex education in schools was sent to committees. Its backers say they want to fight pedophilia and discourage early promiscuity. Critics say it would create a legal tool to persecute gay people, by equating homosexuality with pedophilia.

Another contentious draft bill that was sent to committees was a proposal by a civic group to protect from Jewish claims property seized from Jews — and for which there are no living heirs — during and after World War II. It was drafted in reaction to the U.S. JUST Act that requires the Department of State to report to Congress on the policies that individual countries are taking to return of compensate for seized Jewish property.

Poland's ruling conservative Law and Justice party had insisted on bringing all three proposals to debate this week, but left its lawmakers a free hand in the vote.

Poland already has some of Europe's strictest anti-abortion laws, only allowing pregnancy terminations after rape or incest, if the mother's life or health is threatened or if there is a fetal abnormality.

The country's society is deeply divided between traditionalists loyal to the powerful Catholic Church and secular Poles who seek greater liberalization.

The government is also under attack from opposition parties for insisting on going ahead with presidential elections on May 10 despite the coronavirus lockdown, by holding a postal vote instead of sending voters to polling stations.

The opposition says this offers an unfair advantage to the conservative incumbent, who is running for re-election, arguing that he benefits from greater publicity on state media.