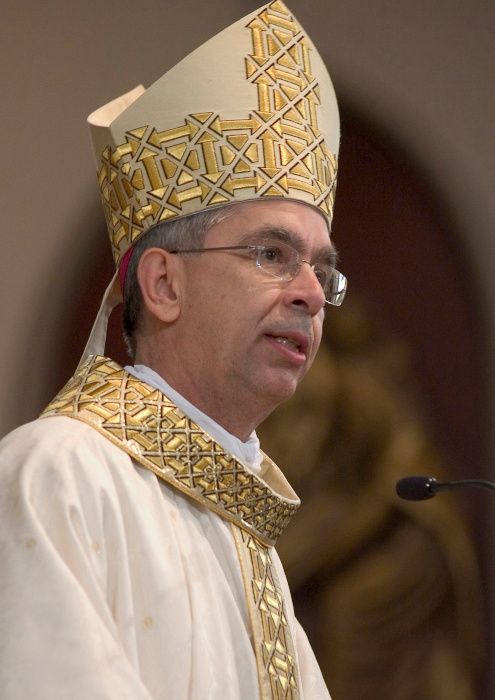 Pope Francis named Archbishop Joseph S. Marino, a native of Birmingham, Ala., as president of the Pontifical Ecclesiastical Academy, the Vatican announced Oct. 11, 2019. Archbishop Marino is pictured in an April, 4, 2008, photo. (CNS/Mary D. Dillard, One Voice)

He will be only the second U.S. prelate to head the Rome-based school, which was founded more than 300 years ago; U.S. Cardinal Justin Rigali was president of the academy from 1985 to 1989.

In early 2013, Pope Benedict XVI had named Marino to be the Vatican's first nuncio to Malaysia; the Vatican and Malaysia announced the establishment of full diplomatic relations in 2011. That post also included serving as nuncio to East Timor and apostolic delegate in Brunei.

Before that, the U.S. archbishop had been the nuncio to Bangladesh since 2008.

Born in 1953, he graduated from Birmingham's John Carroll High School in 1971 and earned degrees from the University of Scranton in Pennsylvania and the Pontifical Gregorian University in Rome.

As a seminarian at the Pontifical North American College in Rome, he spent the summer of 1976 volunteering for St. Teresa of Kolkata and her Missionaries of Charity, caring for male cancer patients and assisting the nuns as they worked in poor villages.

In 2017, he told star2.com, a Malaysian online outlet, that the experience "helped develop my empathy toward the needy, especially social prejudices, loneliness and rejection. The poorest of poor deserve love and care and we should reach out and help them lead better lives."

He said his experience in Kolkata "taught me a spirit of openness and compassion."

After ordination to the priesthood in 1979, he served as an associate pastor at St. Paul's Cathedral in Birmingham from 1980 to 1984, and then entered the academy for diplomats in Rome.

He served as a diplomat based at the nunciature in London and worked at the Vatican's Secretariat of State from 1997 to 2004.

He was part of a Vatican delegation St. John Paul sent to Belgrade in 1999 during the Kosovo conflict in a bid for peace, and he was part of the papal delegation sent in 2003 to meet with U.S. President George W. Bush carrying the pope's plea for peace before the start of the war in Iraq.

Marino succeeds Italian Archbishop Giampiero Gloder, 61, who will be the papal nuncio to Cuba, after heading the academy since 2013.

The academy trains priests — chosen from all over the world by the Secretariat of State — to become Vatican diplomats and men of prayer who will serve the pope and the church. They earn graduate degrees in canon law, study languages and attend courses on the history and practice of Vatican diplomacy, international law, papal documents and current affairs