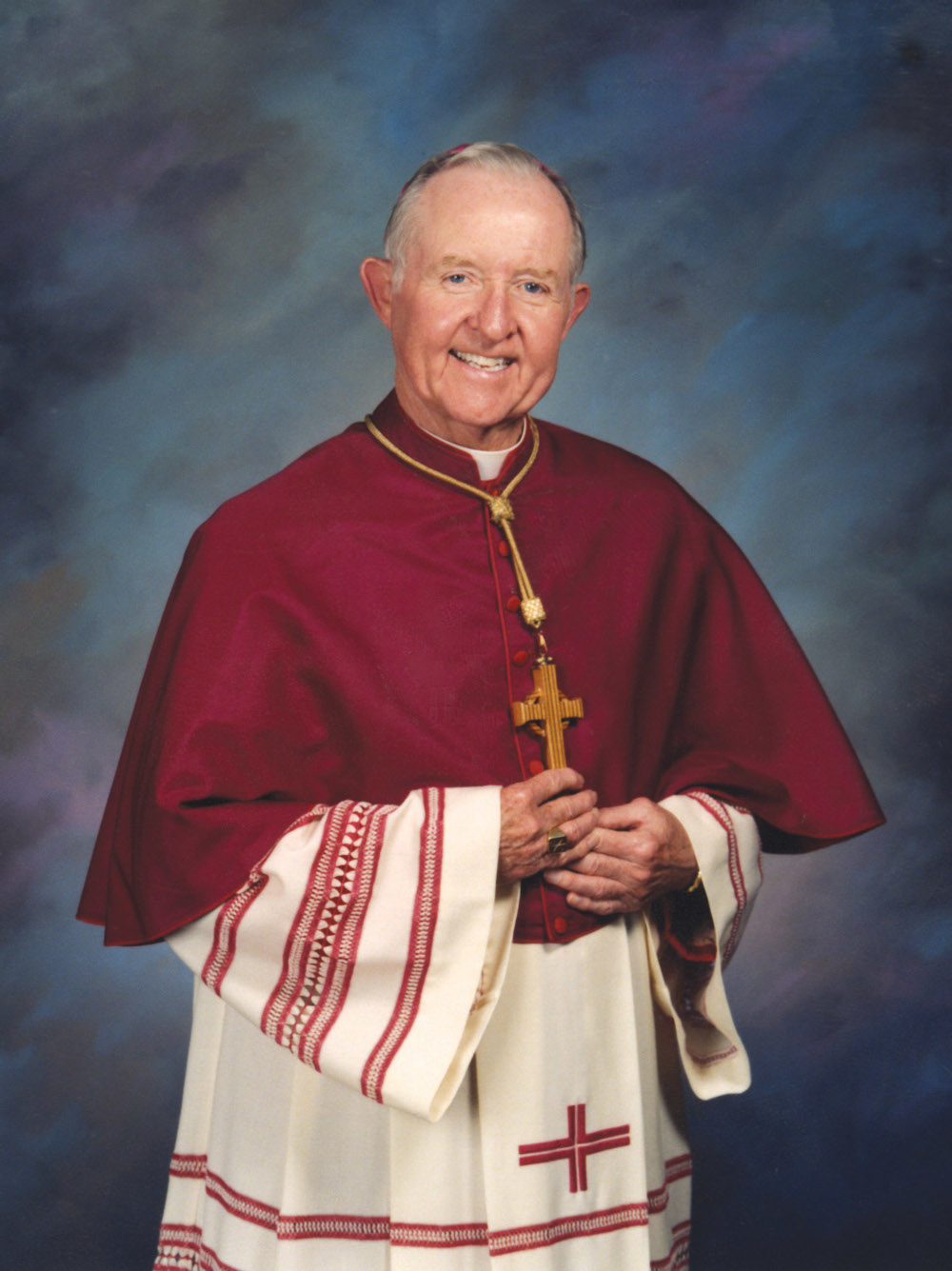 Retired Bishop John Snyder, who led the Diocese of St. Augustine for more than 20 years, died Sept. 27, on the feast of St. Vincent de Paul. He was 93.

His funeral Mass will be celebrated Oct. 2 at the Cathedral Basilica of St. Augustine, with Miami Archbishop Thomas Wenski presiding. It will be followed by the committal service at San Lorenzo Catholic Cemetery in St. Augustine.

Snyder led the 17-county diocese during a period of tremendous growth, when the number of Catholics more than doubled, requiring the addition of eight new parishes, seven elementary schools, and two high schools, St. Francis Catholic Academy in Gainesville and the school on the Westside that bears his name.

He built the Catholic Center, the diocesan offices in Mandarin; renovated and expanded a riverfront estate into the Marywood Retreat and Spirituality Center and converted the old Immaculate Conception school downtown into the Providence Center that provided offices for social service agencies.

But he was best known as a people's bishop – gregarious, approachable and interested in the lives of ordinary people.

In the spirit of the Second Vatican Council, he empowered laypeople, especially women, to assume leadership roles in their parishes and diocesan ministries.

"I will measure the effectiveness of my leadership by the ability and willingness of this local church to call forth, develop and utilize the gifts and talents not only of its priests and religious but all its people," he said on Dec. 5, 1979, when he was installed as the eighth bishop of the Diocese of St. Augustine.

Snyder also reached out to groups that did not feel welcomed in the church – the divorced, the disabled, gays and lesbians, inmates, farmworkers, refugees, and immigrants.

He streamlined the annulment process for the divorced. He established ministries for farmworkers, refugees, and immigrants, offering medical services and legal assistance as well as pastoral support.

The disabled were particularly close to his heart. He established the Ministry for Persons with Disabilities that runs summer camps for disabled children and adults, who come from all over the country to attend. It wasn't unusual for Snyder to drop in to visit the campers attending Camp I Am Special.

On the state level, he advocated for prison reform and spoke out against the death penalty. He was active in prison ministry and after his retirement in 2000, ministered to inmates on death row.

In 1991, he became co-chairman of the Anglican-Roman Catholic Dialogue, an outreach of the Committee on Ecumenism of the U.S. Conference of Catholic Bishops.

In that role, he traveled with Catholic and Episcopal bishops, first to England to meet the Archbishop of Canterbury and then to Rome to meet St. John Paul II.

At the national level, Snyder also took a leadership role on women in the church. From 1992 to 1995 he was the chairman of the bishops' Committee on Women in Society and in the Church.

Snyder was a New Yorker, born Oct. 25, 1925, into an Irish Catholic family. He grew up in Queens and Flushing.

He was the second of three sons. The eldest, Eugene, died in World War II; the younger, James, worked with inner-city children; he died of cancer in 1997. They had an adopted sister, Nancy, who died in 2017.

Snyder said he grew up playing baseball, basketball, tennis, and golf, but baseball was a special love. In his wallet, he carried an old photo of his school team, the Andreans.

He was a lifelong fan of the St. Louis Cardinals. It's no mistake the cardinal is the mascot of Bishop John J. Snyder High School, where he was a regular at football games.

He studied at the Seminary of Immaculate Conception in Huntington, New York, and was ordained a priest June 9, 1951.

He served for six years in his neighborhood parish before he became the personal secretary to Bishop Bryan McEntegart of Brooklyn, New York. On Feb. 2, 1973, he was ordained a bishop to serve as auxiliary to Bishop Francis Mugavero of Brooklyn.

Though he missed parish work, working in the diocesan office gave him the opportunity to be in Rome for the first session of the Second Vatican Council. He said in a 2014 interview that seeing bishops from all over the world made him realize that the church was universal.

The council reforms also revolutionized his faith and his understanding of the church as the people of God.