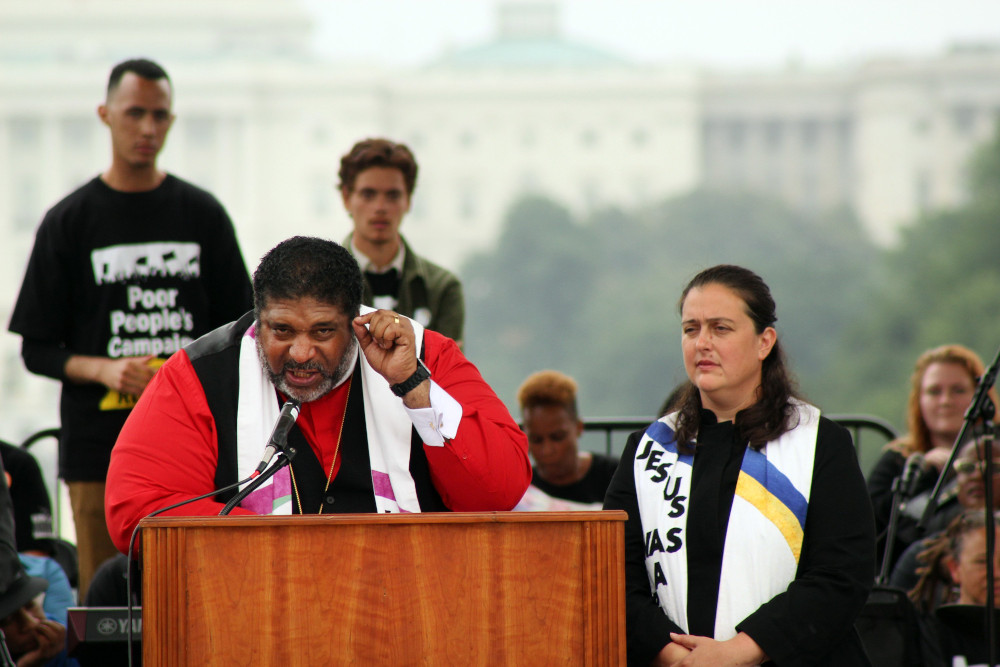 The Poor People's Campaign, a grassroots group with branches in more than 40 states, is urging resistance to or noncooperation with state plans calling for the reopening of the economy just weeks after the coronavirus put most of the country on lockdown.

In its new slogan, the campaign, co-chaired by two Christian ministers, is asking its followers to "Stay in Place, Stay Alive, Organize, and Don't Believe the Lies."

The campaign urges Congress, the president and state governors to follow the recommendations of public health experts and not risk a resurgence of the virus, which is disproportionately affecting poor, uninsured, low-wage laborers, many of them "essential workers" who have no alternative but to go to risky jobs that make them vulnerable to the virus.

"These plans to reopen show no regard for human life," said the Rev. Liz Theoharis, co-chair of the Poor People's Campaign, during an online news conference on May 13. "They're prioritizing the profit of the few over the needs of the majority."

The Poor People's Campaign has long demanded that the government provide health care and paid sick leave for all. Theoharis also called for a universal guaranteed adequate income for all.

The campaign is planning a day of action on May 21 that will include a call-in to House Speaker Nancy Pelosi and Senate Majority Leader Mitch McConnell, urging them to provide more relief for the poor in any future stimulus bills.

The campaign also announced that a previously scheduled June 20 March on Washington will be an online event.

Multiple studies have shown that the pandemic has been devastating economically, especially in nonwhite communities where people live in more crowded conditions and are more likely to be employed in public-facing occupations (such as food service, transportation and home health care) where they are more susceptible to becoming infected.

The latest available COVID-19 mortality rate for African Americans is 2.6 times higher than the rate for whites, according to the APM Research Lab, which tracks coronavirus deaths by race and ethnicity.

More than half of states have started to reopen their economies and loosen restrictions on businesses.

The Rev. William J. Barber II, who co-chairs the campaign with Theoharis, said that he and other leaders are suspicious of governors, especially in the South, who are pushing to have their states reopened. He criticized governors who have refused to expand Medicaid and who have pushed for what he called "voter suppression bills."

"They have no credibility for us to believe them that things are fine," he said.

The news conference included three people considered essential workers who talked of their fears in going to work without health care or paid sick leave.

The call also featured Mary Bassett, director of the FXB Center for Health and Human Rights at Harvard University, who was commissioner of the New York City Department of Health and Mental Hygiene until two years ago.

"The virus is invisible and it spreads silently," Bassett said. "But it is not imaginary. We have to use the public health tools at our disposal to bring this under control. Wishing it away will only cost more lives."