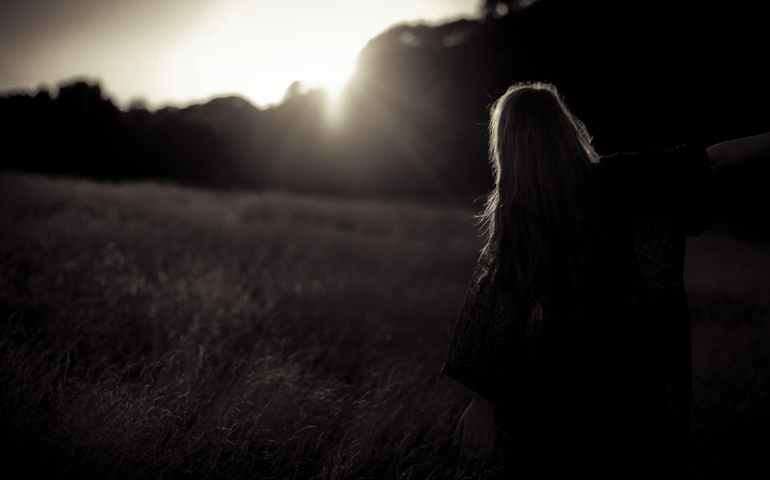 About a year later, while hanging out with her girlfriends, each one started sharing stories of sexual assault or violence, by a babysitter, an uncle or their mom's boyfriend. That's when Griffith realized, "I'm a girl, and because I'm a girl, I'm not safe."

Griffith didn't share her own story about the janitor with those friends, in part because it seemed less severe than their revelations. But she never told anyone else about it either, because she was embarrassed and felt somehow responsible.

Only much later did Griffith realize that church teaching about sexuality may have contributed to her silence. Teachers and clergy at her Catholic grade school had only talked about sex in terms of sin, so she came to associate the two. When she was sexually harassed by the janitor, she felt sinful.

"It just felt so dirty and tainted," said Griffith, co-founder of the Catholic blog Sick Pilgrim and author of spiritual memoirs.* "Just by witnessing it, I felt I was culpable. I was sure I did something wrong to provoke this."

Griffith is speaking out now, as reports of sexual harassment by Hollywood mogul Harvey Weinstein have prompted more victims to go public. Those revelations also spurred a social media campaign in which victims have used the hashtag #metoo to indicate their own experiences of sexual assault, harassment, rape or other sexual violence.

One in three women (and one in six men) have been victims of contact sexual violence at some point in their lifetimes, according to the government's National Intimate Partner and Sexual Violence Survey.

Yet Catholic Church leaders have been conspicuously quiet on the issue. This silence — combined with teachings and systems that contribute to a culture in which sexual violence against women is rampant — makes the church complicit, say theologians and those who work with victims. And given the church's own lack of accountability in response to clergy sexual abuse, its credibility on the issue is already damaged.

Still, the church could be part of the solution, advocates for victims of sexual violence say. But it will need to speak up.

"We're doing a bad job on this," said Megan McCabe, an instructor of religious studies at Gonzaga University who is researching and writing about campus rape culture and structures of sin.

McCabe notes that the U.S. bishops have not specifically addressed rape or sexual harassment, although they have written letters on domestic violence and pornography.

"It seems we're ignoring this as a problem," she said. "And too often when you want to talk about [rape culture on college campuses], it turns into a conversation about hooking up and promiscuity. The hierarchy could be leading the way. Instead, we're being told that the issues women face daily are not worth thinking about."

One reason for the silence may be that religious leaders are afraid and untrained in how to address the issue, according to Hilary Scarsella, director of Our Stories Untold, a network of those affected by sexual violence.

"Even well-meaning pastors who would be sympathetic to the issue seem at a loss for words and genuinely doesn't know what to say," said Scarsella, who writes for the Women in Theology blog and studies theology at Vanderbilt University. "Some of the cultural taboo around talking about sexual violence also affects our churches."

Church leaders' silence reinforces the belief that "it's not a problem in my church," said Emily Cohen, program manager of the FaithTrust Institute, which provides religion-specific intervention and training about sexual violence.

Another possible reason for the church's silence is its participation in the systemic male privilege that contributes to the problem of sexual violence, said Franciscan Fr. Dan Horan, assistant professor of systematic theology at Catholic Theological Union in Chicago.

"This is, de facto, a religious and Christian concern, but because the public face and leadership [of the church] are nearly exclusively male, they're unlikely to recognize and speak out against it," said Horan, who discussed sexual violence recently as co-host of the podcast "The Francis Effect."

Religious institutions and faith can be "a resource or a roadblock" for both victims and perpetrators of sexual violence, according to the FaithTrust Institute. Some of those "roadblocks" include beliefs about suffering and forgiveness, which can inadvertently support violence against women or prevent their healing.

Some theologies of the cross can be interpreted as prioritizing suffering, said Julia Feder, assistant professor of systematic theology at Creighton University in Omaha, Nebraska. "Women and other vulnerable people may hear that as encouraging them to internalize anything that's given to them, and to do so in fidelity to God," she said.

The model of Mary as a woman who accepts whatever happens to her also can be unhelpful for victims of sexual violence, Feder said. "We talk about Mary with this 'open yes,' " she said, "but we talk very little about all the no's she's expressing in the Magnificat."

Nichole Flores, assistant professor of religious studies at the University of Virginia, has researched the rampant sexual abuse of migrant women who work in U.S. agricultural fields. Because of their immigration status, the women are fearful of reaching out for help if they've been raped.

Flores draws on Latin American feminist theologian Ivone Gebara's critique of how women are socialized to be obedient to and meet the needs of men — fathers, husbands, sons, even clergy. "In orienting women primarily toward meeting the needs of men, it takes women away from being oriented toward Christ, in a way that's idolatrous," Flores said.

Christian language about forgiveness also can be detrimental to survivors of sexual violence, who are often encouraged to forgive their perpetrators to find healing, Feder said. Or they may be told that seeking justice is selfish or not Christian.

"This makes it seem as if the moral work that needs to happen falls again on the victim's shoulders," Feder said. "It also doesn't give space in the Christian conversation for justice, structures of accountability and wider systemic changes."

Catholic teaching on gender complementarity "doesn't set women up as moral agents" and instead sees them as "sexual agents," McCabe said. "We have to start challenging the subtle, gendered expectations that women are supposed to be sexually available to men."

Even "peace theology" — popular in Scarsella's Mennonite tradition as well as Catholicism — can be problematic, in that it has traditionally defined "violence" as only physical violence, rather than including the sexual violence, which may or may not be physical.

Part of the solution

But many survivors do find meaning and help in their faith, spirituality and religious rituals after the trauma of sexual violence. Church teaching on human dignity can be a starting point, said Flores.

"If we think of women as being created in the image of God, then the theological response is quite evident," she said. "Undermining women's experiences of violence and degradation, not believing women, not trusting them to speak from their own experience all fall short of our own teaching."

Horan suggests following Jesus' example, who went out of his way to acknowledge those on the margins whose voices were not being heard. "We have a tradition, at our very roots, that has the resources and provides the impetus to do something about this," he said.

Feder believes Catholic incarnational theology can help dismantle rape culture by broadening salvation to include the body and make it not just an "other-worldly" experience. She finds inspiration in St. Teresa of Avila's metaphor of the self as a strong, but transparent castle. "She gives us this language of relationality that's not this totally open "yes to anything.' "

Feder also draws on theologian Edward Schillebeeckx, who questioned theologies that exalted suffering and instead believed God does not want human beings to suffer. Feder applies his theology to the topic of sexual violence in her upcoming book, Trauma and Salvation.

Listening to victims should be the church's first step, agree advocates for those affected by sexual violence.

"This is the starting point for anybody in a dominant class or position of authority or power," Horan said. "We need to be quiet and trust and listen to the experiences of women."

Men can also do a "critical examination of conscience," Horan said, in which they confess direct participation in sexual violence or acknowledge that they have benefited from the structures that allow it. Men who downplay or write off the experiences of women are complicit, he said.

Feder said she often hears from church leaders that they have already addressed the issue in the past. "But that is not a trauma-informed approach," she said. "People don't get over things in a linear fashion. You have to not be afraid to talk about it again and again."

Sadly, church leaders' involvement in covering up clergy sexual abuse has strained its credibility, particularly on issues of sexual violence.

Flores sees it among her students, with whom she's trying to share the best of what Catholicism has to offer. "They remain very skeptical, given the legacy of not telling the truth and not confronting our own power structures to prevent the violation of vulnerable people," she said.

"How am I supposed to convince them that the church's character is concerned for the poor, marginalized and vulnerable, if we don't reflect these teachings in our response to sexual abuse of women and men in other contexts?" Flores said.

But the church could learn from its mistakes with the clergy sexual abuse cover-up that "silence is complicit," Horan said. "It's incumbent upon leaders in the church today to not make that mistake again."

While some are hopeful that the media attention to Weinstein and others will lead to systemic change, others know that the temptation is to push the issue back under the rug.

Trauma researchers believe that such revelations can be so painful that societies — like individuals — cannot sustain prolonged attention to them.

"Society tends to repress it again," Scarsella said, "only to discover it anew, as if it never happened before."

*Editor’s Note: This article originally identified Jessica Mesman Griffith as co-author with Jonathan Ryan of the spiritual memoir Strange Journey: How Two Homesick Pilgrims Stumbled Back into the Catholic Church. Loyola Press, the publisher of the book, informed NCR Nov. 20 that it had ceased publication of the book. The action follows accusations against Ryan for allegedly having inappropriate relationships with some women involved with the Sick Pilgrim blog and ministry, of which Ryan was co-founder.

A version of this story appeared in the Dec 1-14, 2017 print issue under the headline: Sexual violence victims break the silence.