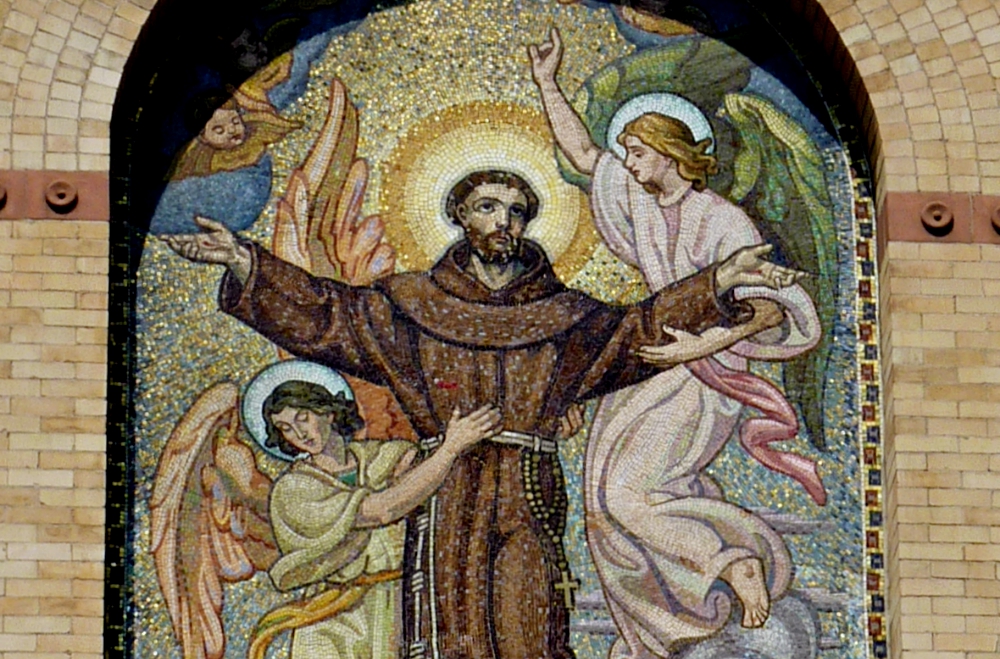 St. Francis of Assisi is depicted in mosaic on the Church of St. Francis of Assisi in Manhattan, New York. The parish is staffed by Franciscan friars of the Holy Name Province, which plans to unify with five other U.S. provinces of the Order of Friars Minor. (Wikimedia Commons/Jim McIntosh)

In an effort to "reenergize the Franciscan spirit" in the country, six United States provinces of the Order of Friars Minor plan to unify in the next several years.

The May 30 announcement of the plan came after the friars of provinces based in Albuquerque, New Mexico; Cincinnati; Franklin, Wisconsin; New York; Oakland, California; and St. Louis voted in favor of uniting the provinces.

The Immaculate Conception Province, one of two provinces based in New York, will remain independent, having bowed out of the unification discussions several months ago.

Franciscan Fr. John Eaton, provincial vicar of the Franciscan Province of the Sacred Heart, based in St. Louis, told NCR that the conversion to a single province will have two goals: to "re-energize the Franciscan spirit in the United States" and "to be more effective" with its workforce.

The move comes after several years of consideration, as the number of Franciscan friars in the country has declined sharply in the last few decades, with fewer than 1,000 friars in the U.S. today. The order has lost more than two-thirds of its membership since a peak of more than 3,200 in the 1960s and '70s.

"The boom of the 1950s and '60s wasn't being reflected in classes of incoming formation students," even as the current friars age, Franciscan Fr. Dan Horan, an assistant professor of systematic theology at Catholic Theological Union, told NCR. "There may not be a need anymore to have seven distinct U.S. provinces."

In response, the order began to consider reducing the number of provinces, by either splitting up the country into larger regional provinces or making them one. In discussion among the friars, "there began to be a kind of consensus around a one-province approach," Horan said. With advances in technology and the projected size of the order in the U.S. in coming years, "it made sense to do one major restructuring," he added.

The provinces voted shortly before the result was announced in May. Although the tally varied across provinces, in all six, a majority of the friars, all of whom had a vote, elected to adopt the restructuring plan. In all, Horan said, about 70 percent of the friars approved of the plan.

Other American religious orders have adopted similar plans in recent years in light of declining membership and demographic changes.  The Jesuits are currently in the midst of a multiyear province realignment that aims to reduce the number of Jesuit provinces in the United States from 10 to four by 2020.

"We are hoping that we will learn from what [other orders] did," Eaton said, "learn from their experience to make our transition perhaps somewhat smoother."

Before going forward, unification must first be approved by the minister general of the order, Franciscan Fr. Michael Perry, an American and member of the same province as Eaton. The U.S. Franciscans are expecting that their plan will be approved with little difficulty. "I can't imagine that [Perry] would obstruct this in any way," Eaton said.

When the process will be complete and where the new province's headquarters will be have yet to be determined.