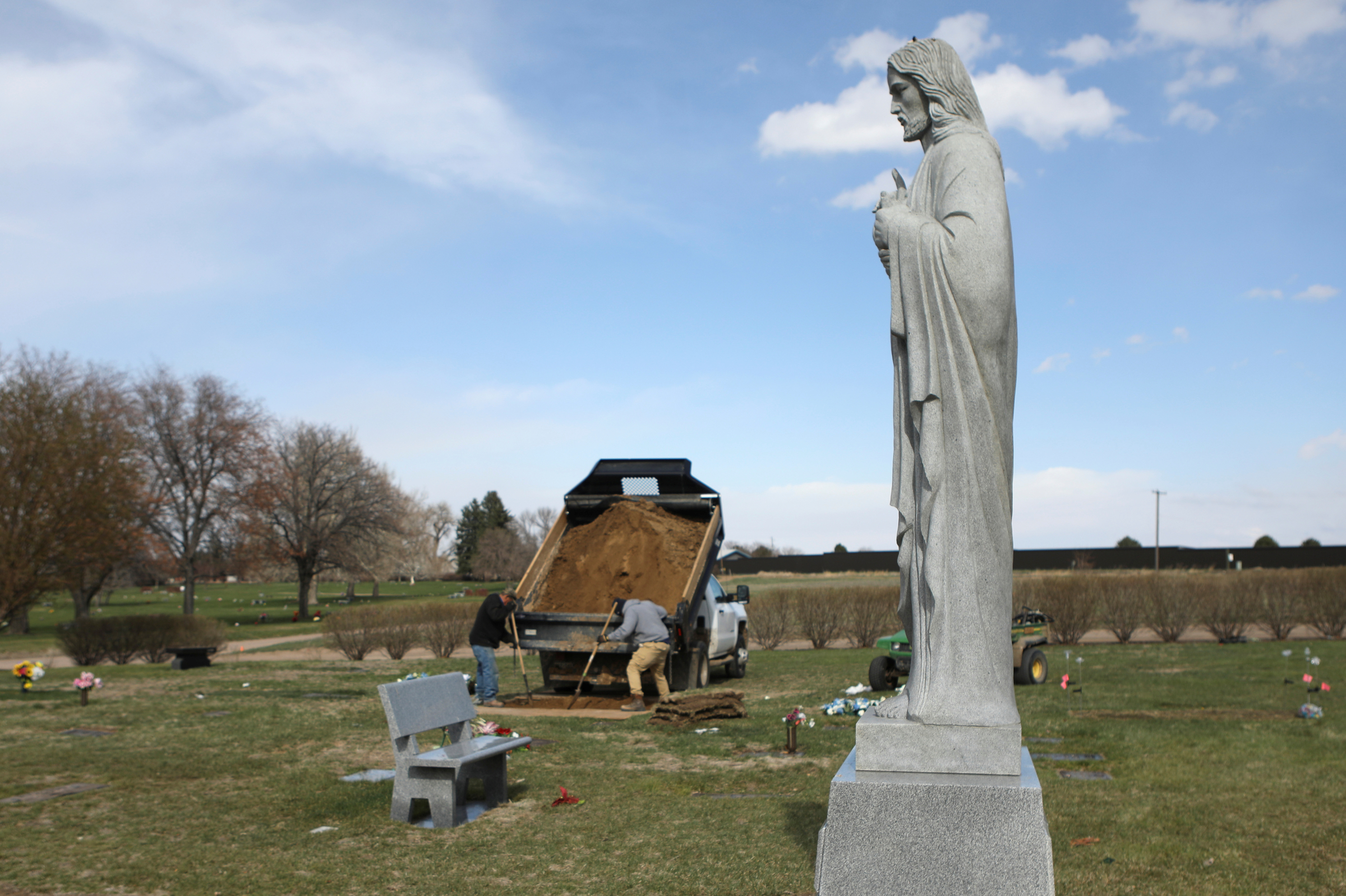 Cemetery employees fill in the grave of meat-packing plant employee Saul Sanchez in Greeley, Colorado, April 15, after he died of a COVID-19-related illness. (CNS/Reuters/Jim Urquhart)

If ever someone was supposed to have a Catholic funeral, it was Mary Symes. The beloved 75-year-old Massachusetts wife, mother, grandmother and great-grandmother was a religious education teacher and Catholic school secretary for many years. She tested positive for COVID-19 three days before her death, though her son Bobby Symes attributes the isolation brought on by the pandemic-induced lockdown of her nursing home — she had been living with Alzheimer's — as what accelerated his mother's final decline.

"She's going to hold on till May 1," Symes recalls both of his siblings telling him, alluding to his mother's deep Marian devotion, which is exactly when she died. The family kept vigil outside the first-floor window of Mary's room, and Symes fully expected that the social distancing requirements of the pandemic would also dash any hopes of the Catholic funeral his mother would have wanted. But what happened instead surprised him and his family and, they hope, offers a glimmer of hope to other grieving families as society adjusts to what even a "reopened" reality looks like.

Meeting the day after Mary's death with Amanda Fidalgo, a funeral director at McDonald Keohane Funeral Home in Weymouth, Massachusetts, the Symes family was surprised to learn how much they could still do in terms of a Catholic funeral. Mary's husband had prearranged their funerals over a year earlier, giving Fidalgo a starting point, working within pandemic restrictions.

"What can we do to meet as many of their wishes as we can?" was the operating principle Fidalgo said she brought to the process. "It would have given them a lot of comfort to have a full funeral Mass," she said.

"We had to switch some things around from what was originally planned," Symes recalled, as the family and Fidalgo went through the Order of Mass and kept as much as they could without a priest or a church. "It kind of brought us together to figure out how we're going to do this and do it appropriately and incorporate the pieces that should be there."

Ultimately, a wake and funeral were combined into one May 5 memorial service at the funeral home. It included three Catholic hymns — including the Ave Maria — chosen by the family, along with their chosen Scripture readings, eulogies and even prayer intentions for health care workers and others touched by the pandemic. The complications this involved are captured by a term that has already received a lot of play in the Trump era: family separation.

"We had to get really creative and think outside of the box," Fidalgo said of the logistics, which included three different shifts of fewer than 10 family members filing in and out of the funeral home during the hour prior to the service. Because of the pandemic, they hadn't been in the same room as Mary in seven weeks. "Everyone had an opportunity to say goodbye."

A core group of mourners, including Mary's husband and their three children, stayed for the duration of the service. Mary's husband, now 80, is in a wheelchair and on oxygen. Readers and eulogists were ushered in and out of the building as needed, while the remainder of the family followed a livestream of the service on their phone from their cars outside. Everyone wore masks, except for when speaking. The family invited only three of Mary's closest friends.

"It was so weird, kind of being ushered in to speak … when we should all be in there together," Antonucci said. "I didn't want to leave the funeral home."

Antonucci and her uncle Bobby Symes both noted how difficult physical distance is for a family in mourning.

"It's just so hard. You're sitting there with masks on. You can't give your siblings, your nieces, your nephew, your own father a hug," said Symes.

"You could just tell it was very weird for him," Antonucci said of her grandfather. The pain of separation extended even to the one portion of the service that involved a priest, the graveside service.

"The grandchildren weren't allowed to gather at the grave, which was horrifying to tell them that, but they understood," Fidalgo said. But she said that there were moments of warmth through the experience, such as when the funeral procession drove past St. Francis Xavier in Weymouth, the parish where Mary had worked, only to find folks lining the property to wave goodbye, a surprise for much of the family. "Because of the social distancing part of it, the line looked like it went on forever," Fidalgo noted.

Another source of comfort was the video livestream from the funeral home. As Mary's husband and children waited for the service to begin, Fidalgo shared with them that over 80 people — presumably many with more than one person to a screen — were logged on to watch.

"To know that there was that support out there … I was thankful to her telling us that beforehand," said Symes. "You knew the support and love were there."

Following the service, Mary's caregivers at the nursing home, who'd been unable to watch live, asked if the funeral home could post the video online. The family acquiesced.

"I've watched her service, I think, twice since then. I never thought I'd want to. It actually brings me comfort," said Symes. Symes was especially happy to hear his father say, "That was just a beautiful service," afterward and repeating that sentiment since. "It made us feel good … that he was happy with the sendoff that my mother was able to get."

While Fidalgo and her colleagues are very proud of their being able to bring comfort to Mary Symes' family, she calls the overall experience "very unnatural" for funeral directors. "We're service-based. Nobody gets into this profession unless you want to help people," she said, noting that, when handshakes and hugs are no longer part of accompanying the mourning, "All your instincts are cut short."

"They feel lucky to have had a positive experience in light of a horrible situation," she said. "We are finding that most families assume they cannot have anything and are incredibly grateful for the lengths we are going to make sure their needs are met. I do not believe many funeral homes are making the effort to be quite as creative as we are."

Mary's granddaughter Nicole Antonucci noted that, even with its very strange format, "I could still feel everything you should feel at a funeral." She added that, as her grandmother was so well loved by so many people, her funeral would have been enormous otherwise. "I was sad that she couldn't get the big thing that she deserved. … But that's how life is. Stuff happens. You need to adjust."

This story appears in the Saints Next Door feature series. View the full series.
A version of this story appeared in the June 12-25, 2020 print issue under the headline: Family sees sendoff as sign of hope.