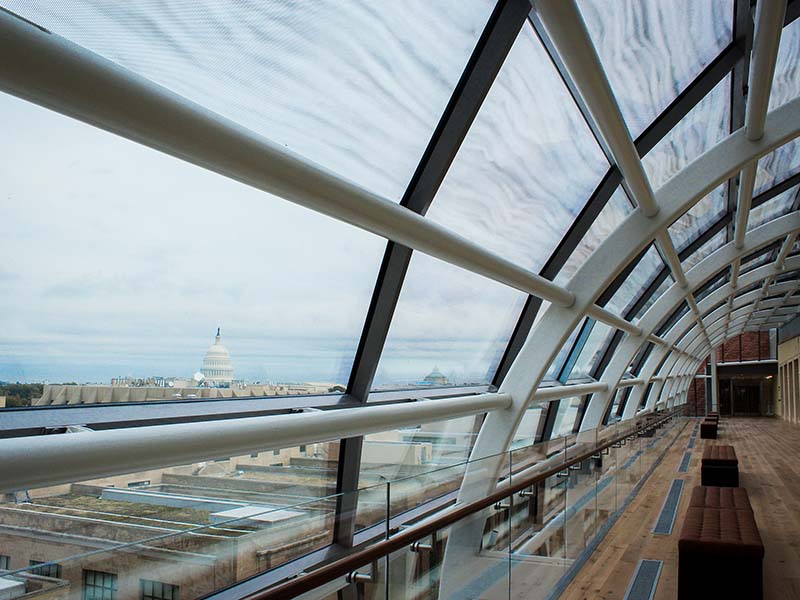 View of U.S. Capitol from the Museum of the Bible. (RNS/Adelle M. Banks)

In the new Museum of the Bible is a room full of Bibles, color-coded to show the more than 2,000 languages into which the holy book has been at least partially translated — and the similar number for which translation has "not yet begun."

That exhibit is just one example of how the 430,000-square-foot building with a view of the U.S. Capitol is meant to fascinate, educate and — depending on your perspective — evangelize.

"You could certainly interpret it that way," said Museum of the Bible President Cary Summers of the language-related exhibit in an interview shortly before the museum’s Friday (Nov. 17) opening.

Some may see the exhibit as a visual depiction of the Bible's growing influence over time, and others as a demonstration of the potential for spreading its message further. "We’ve never viewed it as evangelical outreach at all. It’s just part of the history of the Bible. And we’re showing it in this great way."

Since the nonprofit behind the museum was established in 2010, officials have shifted from their original mission "to inspire confidence in the absolute authority and reliability of the Bible" to one that’s become "nonsectarian" and aimed at welcoming people of all faiths and none.

Strategically placed near the National Mall, a collection of monuments and museums dedicated to the country’s civic ideals, this museum is focused on religious ideals. Its success will, perhaps more than that of other museums, depend on the eye of the beholder. Visitors who swipe its high-tech screens or eat in its Manna restaurant will judge its contents from their own perspectives — religious, Christian or evangelical, or none of the above.

The museum opens amid controversy around its message and its primary funders, Steve Green and his evangelical family, which also run the Hobby Lobby craft store business that three years ago won a much-debated court case giving it an exemption from the contraception mandate of the Affordable Care Act. Hobby Lobby recently reached a legal settlement over some of its acquisition of artifacts.

Separately, museum officials say they have responded to critics about the museum's planned contents and language, adding nuance to signage and switching out artifacts to include a wider representation of cultures drawn to the Bible.

The museum’s front entrance features a gateway with two 40-foot brass replicas of the Book of Genesis as it appeared in the Gutenberg Bible, the version that first brought the holy book to the masses in the 1400s. Just beyond these panels is a glass vestibule featuring an artistic rendering of Psalm 19 (“The heavens declare the glory of God”), inspired by the Bodmer Papyri fragment that is one of the oldest artifacts in the museum’s collection.

The spacious lobby — its wall etched with “Thy word is a lamp unto my feet and a light unto my path” — features a 140-foot-long digital ceiling with revolving images of landscapes, stained glass and items from the permanent collection.

Museum staffers will offer visitors heading to the three floors of central exhibits tabletlike digital guides to help them plan their trek based on their personal interests and the amount of time they have to spend in the museum that took three years and $500 million to build. Though the Green family contributed the bulk of the funding, smaller financial gifts have come from schoolchildren sending in a dollar a month as well as Catholics, Jews and atheists, Summers said. 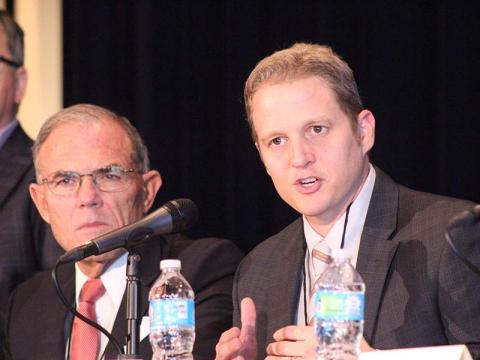 Admission is free but donations are suggested. The museum is offering timed-entry passes but visitors can also attempt to enter without them.

Just above the lobby, the "Impact of the Bible" floor highlights how Scriptures have influenced cultures across the globe — from education and literature to art and architecture. A Bible owned by Elvis Presley is just steps away from mannequins adorned with dresses by fashion designers such as Dolce and Gabbana, who have featured icons of Mary in their luxury brand.

"Secular audiences will be surprised at the influence of the Bible" on many aspects of popular culture, said Seth Pollinger, director of museum content.

The eight-floor museum will display around 1,600 items in its permanent exhibits — about three-quarters of them Bibles and biblical manuscripts. It also will feature separate temporary exhibitions of collections of the Israel Antiquities Authority, the Bible Lands Museum in Jerusalem and the Vatican.

Israeli officials are expected to join dignitaries ranging from congressional chaplains to Catholic bishops for a private ribbon-cutting ceremony Friday two blocks from the National Mall. The museum is set to open to the public the next day.

Despite the fanfare, the museum opens in the shadow of a recent Justice Department settlement in which the Hobby Lobby company paid $3 million and returned 5,500 artifacts that were illegally imported from Iraq.

Museum of the Bible officials have tried to distance themselves from the controversy, saying the museum "was not a party to either the investigation or the settlement."

Noting that the artifacts in question included cuneiform tablets and not Bibles, David Trobisch, the museum's director of collections, said that nevertheless there was fallout for the museum.

"It still did affect us because we had a display where we wanted to show the development of writing, and the different tools that are developed," he said at a gathering with reporters in October. Museum officials had to ask partners to loan them items to complete the exhibit.

But beyond the countless Bibles and fragments on display, much of the museum seems more Disney-like than scholarly. There are videos interspersed between artifacts and touch screens and a sound booth where people can write and speak of their own experience with the Bible.

Visitors can snack in the Milk and Honey cafe, sit in a 472-seat theater where the Broadway musical "Amazing Grace" will begin its national tour, or take a 4-D ride that will give them the sensation of flying over Washington and viewing its buildings that contain biblical texts.

In the "children’s experience" area, young visitors will be able to pretend to slay Goliath with a slingshot or fish with Peter, helping him fill his boat after Jesus told him to let his nets down again.

On the "Narrative of the Bible" floor, there is an area that looks like a movie-set re-creation of how the village of Nazareth might have appeared in Jesus’ time, including a family dinner table filled with bread and beans and a mikvah used for ritual cleansing. Costumed docents will talk about Jesus, but the museum has decided to generally avoid portraying him physically, Pollinger said, "because it’s just not an issue that we want to solve or take a position on."

The museum does take on numerous conflicts over faith, from a display of Bible-based arguments for and against slavery to a desecrated 1800s Torah scroll that was turned into shoe inserts in the next century.

It also addresses debates about whether the Bible and science are "mutually exclusive": "There is broad agreement today among historians that modern science owes a great deal to the biblical worldview," reads a sign near a sculpture of astronomer and physicist Isaac Newton holding a compass. "The idea that the natural world is orderly springs from the Bible."

Citing the recent legal action, the 8,500-member Society of Biblical Literature issued a statement prior to the opening urging museum officials to operate with "transparency and ongoing openness to review and analysis by scholarly peers."

Summers responded that the museum has done just that: More than 100 scholars have weighed in on aspects of the museum’s plans and content.

Some have commented by email, drafting language in the exhibits, correcting typos — B.C. vs. A.D., for example — or adding explanations, such as one about the importance of the history of ownership of artifacts. Museum staffers also made a change to an art section, adding a contemporary black Madonna painting after they were criticized for not being more inclusive.

One of the key areas in the "History of the Bible" floor is a section on the Dead Sea Scrolls. Pollinger escorted Robert Cargill, incoming editor of Biblical Archaeology Review, through the museum and said he "enriched" how the museum deals with questions about the authenticity of their scroll fragments.

"Because that is an intense discussion now, we wanted to upgrade our signage to be able to discuss how it is that you can tell some of these different clues about potential forgeries," Pollinger said. "We wanted to make it really an educational opportunity rather than defending whether something is real or not."

Cargill, an assistant professor of Judaism and Christianity at the University of Iowa, said most museums wouldn’t display any item whose authenticity is in question.

"If there’s any doubt of whether something’s a forgery, you don’t put it out there," he said. "They’re still going to be criticized for that and that’s just a decision they've got to live with."

Both Cargill and Christopher Rollston, a George Washington University professor and a member of the SBL’s governing council, say they believe the museum officials have heard their concerns and have made at least some of the changes they recommended.

Though there are Scripture-affirming banners, such as one that quotes a verse in 2 Timothy ("All Scripture is inspired by God"), Pollinger said curators squeezed "multiple views" about the origins and timing of the Bible within the 60-word limit of some signage.

"We do acknowledge that some think that God revealed the Torah to Moses," he said, "but we will say scholars do not agree when different parts were first written down."

But Pollinger also said he looks forward to the expansion of the "illumiNations" exhibit that shows the languages in which the Bible has been, and has yet to be, written down. He hopes it will be "like the Library of Congress for translations" as more are completed and samples are displayed there.

Rollston said that the exhibit, as with other displays in the museum, will inevitably be interpreted through the lens of whoever is viewing the museum’s offerings.

"I think with a lot of the things that are on display, they often navigate sort of a middle way," he said, "without saying some things that might disappoint or disturb certain constituencies on both sides, left and right."