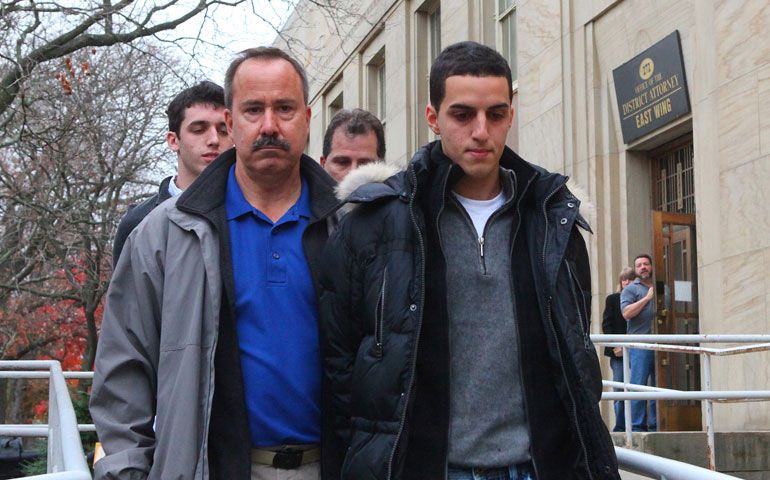 George Trane, right, is led out of the Nassau, N.Y., District Attorney's office in 2011. He was one of a group accused of charging to take tests for students at Great Neck North High School. (Newscom/MCT/Howard Schnapp)

Three months into the school year, with testing underway and homework being turned in, be assured that cheating is in full flow -- at least if some of my high school and college students are any measure. During class time last year, I asked them to answer a question: If you have a chance to cheat on an exam and with no risk at all of being caught, what's your choice? Write it down, anonymity guaranteed.

In 2012, the nation's top cheating scandal was at Stuyvesant High School in New York City. This is a school where acing tests is all but second nature for the brainiacs. More than 70 students at the academically elite school were caught during their state Regents exams using cell phones and other new technologies to score the right answers. In June 2012, nearly 80 Air Force Academy cadets, taking a calculus test on their own time outside the classroom and unsupervised, were found to have cheated. They checked a website for the answers. The same year at Harvard University, some 70 cheaters were booted for cheating on a government course exam despite it being open book, open notes and open Internet.

In 2011, 13 teenage venture capitalists at Great Neck North High School, on the Gold Coast of Long Island, were nabbed, cuffed and prosecuted for charging between $500 and $3,600 to take SAT and ACT exams on behalf of dimmer-bulb students. One of the impersonators told CBS News that he delivered "a perfect score on the math section" for his customer. As the cash payments increased, so did this smarty's cheating skills.

In my classroom research, if we can call it that, I came upon two kinds of cheaters. The first group justified gaming the system because they felt the system was already gaming them.

The second group consisted of the out-and-out opportunists.

Most of the non-cheaters -- about 20 percent of the classes -- were less concerned about ethical matters than dealing with the emotional negatives caused by the dishonesty.

My own solution to the cheating problem, at least in my high school courses, is to give no exams, no tests and no homework. That's about as pressure-free as I can make it. My classes are based on discussion, not lectures. Speak coherently, listen well to others, parry politely with whom you disagree, have the courage of your convictions but, better, the courage to challenge them: Do that and a decent grade is assured. As well as a clear conscience.

For this young Indigenous woman, passion for environmental justice is rooted in the land