Does Christianity have a Wonder Woman? 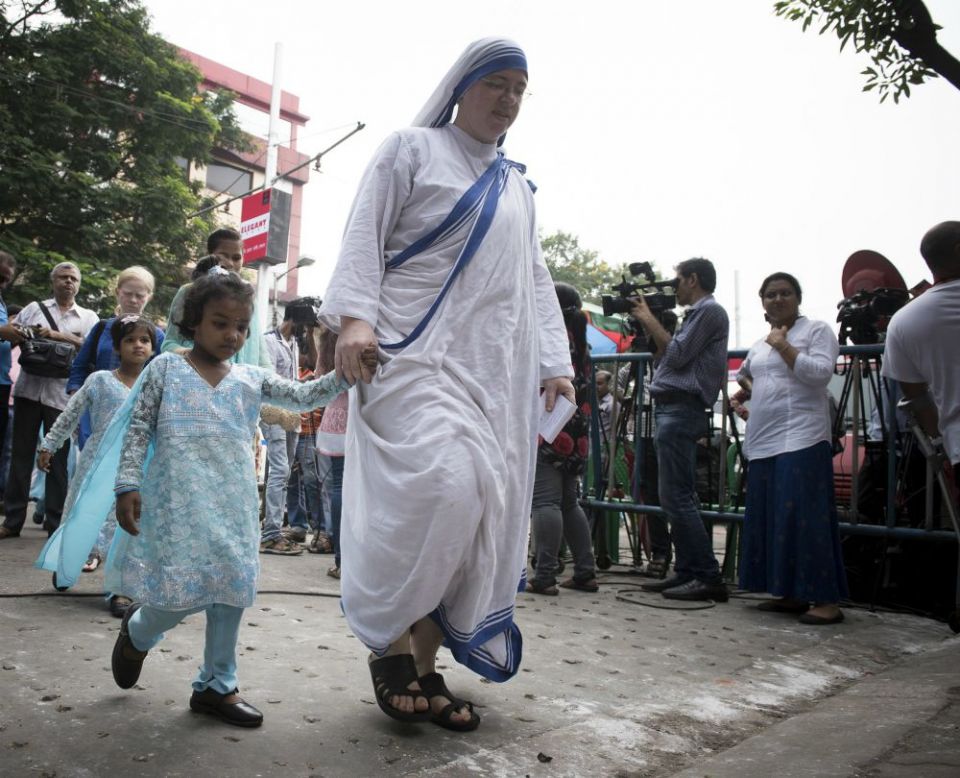 Missionaries of Charity Sister Joan of Arc escorts a child prior to a singing celebration for Mother Teresa in Kolkata, India, 2016. (CNS/Jeffrey Bruno)

I'm not the person you would expect to write a column about this character or movie, Wonder Woman. I can't pretend to be a comic book fan or superhero guru. My husband spent weeks just trying to convince me to see the movie for the first time. At that point, my knowledge of Wonder Woman was limited to the Wonder Woman T-shirts that some colleagues and I once wore for Halloween — and which I now regret giving away!

As one of millions who have been introduced (or reintroduced) to Wonder Woman as a contemporary cultural icon, I have been surprised by my own hunger for her story, and by the extent to which this hunger is evidently shared around the world, by women and girls, and also men and boys.

This hunger has launched "Wonder Woman" into the highest-grossing domestic summer film and second highest of 2017, earning more than $800 million globally at the time of this writing. As only the second female director with a $100-million-plus budget, director Patty Jenkins has broken numerous glass ceilings; Wonder Woman earned the largest opening ever for a female-directed movie and is the most successful live-action film with a female director. Now, a release date for "Wonder Woman 2" has already been announced (December 13, 2019 — mark your calendar!), and Warner Brothers is potentially launching its first-ever Oscar campaign for a superhero movie.

As I have followed the movie's success and its inspiring reception by young girls in particular, I am curious what it is about "Wonder Woman" (and the character) that speaks to so many people.

At some level, she seems to tap into a kind of rare female archetype, one who transcends the static, two-dimensional constructions of womanhood so pervasive in our society. Jenkins' Wonder Woman is presented as a complex figure, capable of embodying many qualities that, for women, are often positioned in opposition to one another. She is both fierce and vulnerable, independent and yet profoundly connected to others. Her idealism, beauty and capacity for love are alive right alongside her strength, both interior as well as physical. She finds herself in a world beset by violence yet does not glorify or seek it. Her actions are undertaken with a single-minded mission to help humanity, even as she grapples with the darkness and light present in the human condition.

Intrigued by this film, I cannot help but inquire: Does Christianity have a Wonder Woman? I'm not talking about the Hollywood-style special effects, huge film budget or her pretty awesome Lasso of Truth.

By this question, I mean: Does our faith offer a female role model that, like Wonder Woman, also celebrates the tremendous complexity, power and beauty of women? A figure that transcends the stereotypes and unattainable ideals of femininity not only present culturally but also exacerbated in our religious communities? In what ways do our Christian communities value and celebrate Wonder Woman's many qualities in real women of faith?

Related: 'Wonder Woman' rises above darker superhero films, but not violence itself

This movie's success testifies, in part, to the profound longing that countless women and girls experience for such a female witness. I notice this longing in the experiences of Catholic women around me. And in some ways, my decision to pursue graduate theological studies was an attempt to seek this woman — to find, in my own tradition, a model of womanhood that could inspire and sustain my faith journey as a young woman.

At least for me, this quest has been challenging. My search for those "wonder women" in the Christian tradition has required a great deal of seeking out, digging up and reclaiming of the buried histories, stories and voices of Christian women of faith. It has meant looking deeper than many of our dominant narratives about Christian women — and womanhood — to explore fresh interpretations that intentionally embrace women's full complexity, giftedness and power. This journey invites women to speak for themselves, both our ancient mothers in faith and also Catholic women today.

Shiphrah and Puah, Miriam, Mary of Nazareth, Mary Magdalene, Phoebe, Junia, Hildegard of Bingen, Joan of Arc, Mother Teresa, Dorothy Day and many more. Looking closer, I've begun to discover many "Wonder Woman" qualities in these figures. I've also grown in appreciating these qualities in the numerous women around me who continue — as women always have — to sustain and enliven our faith tradition.

In my experience, these "wonder women" are not deeply known as such within our faith communities. As a high school religion teacher, I am continually reminded that their stories — in all their complexity and courage — are not ones with which our young people are largely familiar. It can take significant time and effort to discover these Christian wonder women, and to invite their witness to nourish, inspire and transform us.

As I hope to see this movie one final time before it exits the big screen, I also hope that "Wonder Woman" will be a film that inspires Christians to seek out and celebrate Wonder Woman figures within our own community. Perhaps (after making sure to see the movie!), we can ask ourselves, "Who, for me, is a wonder woman figure in my faith? How can I value and celebrate her qualities and contribute to building a Christian community that does the same?"

[Jennifer Mertens teaches religion at a Catholic high school in Cincinnati. She holds a Master's of Divinity degree from the Catholic Theological Union.]

Column | Does Christianity have a Wonder Woman?

'Wonder Woman' rises above darker superhero films, but not violence itself