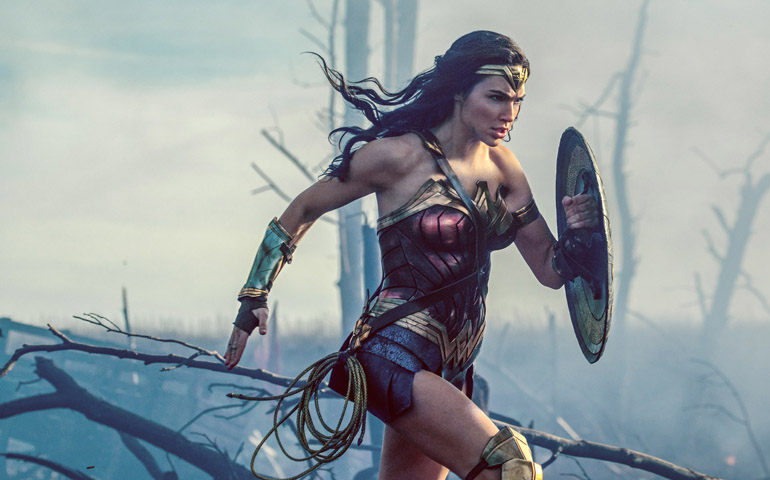 Gal Gadot stars in a scene from the movie "Wonder Woman." (CNS/Warner Bros.)

"Wonder Woman" delivers a true rarity in the world of blockbusters: an inspiring story without vulgarities, objectifying sexuality, or de-humanizing violence. The film's score and cinematography are gorgeous. The fighting is not shocking or excessive. The battle scenes set during the First World War feel more like old war reels than the increasingly popular stylized hyperviolence of movies like "300," "Watchmen" and "Logan." The early fight scenes focus more on the agility of the Amazon warriors flipping off horses in slow motion whilst firing bows and arrows. There wasn't much humor in the story, but it wasn't overly dark either like the previous DC and Marvel films, "Guardians of the Galaxy" being the lighthearted and hilarious exception.

Being an origin story, the plot plods along for the first half of the movie, but the lengthy setup is necessary to establish the keystone of the movie: Diana's motivation for battle. Diana leaves the paradise of her all-female island not just to defeat a rival, exact vengeance, or prevent a global take-over. Rather, Diana seeks to eradicate the root of violence: the god of war, Ares, portrayed as an aristocratic Englishman with a moustache, an image that requires an extreme exercise in suspension of disbelief.

Overall, it was enjoyable and inspiring, and for good reason it will likely be the biggest hit of the summer. A great deal more could be said about the film, but here's one potential catechetical nugget: Diana's motivation compared with the theories of René Girard (1923-2015).

The most enduring contribution of Girard's long-career is his theory of "mimetic desire." In an overly simplified version of Girard's theory, all conflict is the result of desire by imitation. In other words, I want something because you want it. We can't both have it, so this leads us into conflict. Our conflict leads us to scapegoat another to achieve a temporary cease-fire. Over decades, Girard presented many nuances of this theory, drawing inspiration from biblical stories such as Cain and Abel as well as classic works of Dostoevsky, Cervantes, and Shakespeare,

Girard presents the paschal mystery as the definitive defeat of the cycle of endless conflict, because Jesus refused to give into violence. This is Diana's stated goal on the outset of her journey. She desires not just to win a war or defeat a foe but to banish the true source of all conflict, which is incarnate in Ares. In the villain-tells-the-protagonist-his-plan part of the movie, Ares states that there will never be an armistice, but rather endless war, which requires human sacrifice. While the film understands the core mechanism of violence, Diana fails to resist engaging in it. Her conviction that Ares is influencing people who are basically good does not prevent her from killing dozens of Germans. "Violence is a terrible adversary, especially since it always wins," wrote Girard in his 2009 book Battling to the End. The only way to defeat violence is to refuse to participate in it. Nonviolence, however, doesn't break box-office records. Violence, retribution, and scapegoating are the oldest, most played-out, and bestselling storylines in history. You would think we would get tired of their endless sequels.