Easter reflection: Listen to Him 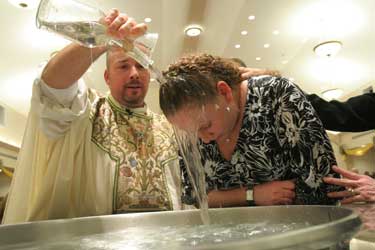 My daughter is broken open in Haiti. A neighbor brings her the family’s two eggs. She does not bring her, as I would, any two eggs — two eggs from the carton of 12 — but the two eggs. These are the only eggs the family has.

My 3-year-old granddaughter spies a friend in a crowd of children. She hands the child a stick of gum. My daughter watches as the Haitian child carefully pulls the single piece into ten pieces. She keeps one speck for herself and passes the other nine out to her companions.

There is no trash-removal system or disposal system in Haiti. Trash is tossed outside the house. When the pile is high, people throw in coconut shells for kindling and set the whole mess on fire. It can take a long time for a Haitian family to accumulate enough trash to burn. They have little to keep and even less to discard.

But Americans, even Americans living without electricity and running water, accumulate trash. My daughter waited as long as she could to throw her refuse outside the house. She knew it would attract a crowd of children. She knew they would go through the trash and find treasures to keep. She writes:

“It was interesting to see what the kids wanted from our trash. They saved the Doritos bags from my birthday, an old BIC lighter that no longer works, the lid of a wet wipes container, and kindly returned a Ziploc beef jerky bag to me. Surely, they thought, we did not mean to throw that out as it still seals and can be used for sugar, flour, important paperwork, etc. One of the neighbor girls, Judlyn, turned the shiny aluminum side of the Doritos bag into a dress for her doll.”

My daughter, a nurse, tells me that the people of the village are “chronically dehydrated and chronically malnourished.” Some of the people are starving. One of those is a little girl, 3 years old, the same age as my granddaughter. The two girls have become friends. The Haitian child is, by my daughter’s estimation, half the size of her own child. The girl’s hair is the telltale orange of protein deficiency. Her arms and legs are thin, but her belly is swollen and distended. She tells my daughter, “I am hungry.”

She eats, now, each day with my daughter and her family. She has brothers and sisters. They are also hungry.

Each day my daughter meets the women of the village. They carry loads of laundry or buckets of water balanced on their heads. The women greet her in Creole, “Good morning, my sister.” It is, my daughter says, a hard greeting to bear.

My daughter wonders that they call her “sister.” She does not think we, their near neighbors to the west and north, have acted as brothers and sisters to the people of Haiti. She thinks we are content to forget them. I am more than content to forget Haiti and its people. I am eager to do so. I do not wish to consider what it means that the women of Rosier are my sisters, with all that word, that truth, demands.

My daughter is broken open in Haiti. I wish to remain closed up. I wish the people of Rosier would starve quietly, out of my sight and out of my hearing.
The reading from Genesis on the Second Sunday of Lent fell like a blow on our ears. God says to Abraham,

“Take your son Isaac, your only one, whom you love, and go to the land of Moriah. There you shall offer him up as a holocaust on a height that I will point to you.”

I shiver at these words, the cruelty of them. “Your son.” “Whom you love.” And the knife twist: “Your only one.”

There is a reprieve. Abraham finds a ram in the thicket, a replacement for his son. The ram will die. Isaac will live to marry and have children and die an old man.

There is a crack in my plating. I think, “But there is no ram for the children in Rosier. There is no one to take their places in the holocaust of hunger.”

I remember. It is God who demands the sacrifice and God who stays the knife thrust. But it is Abraham, a human being like me, who hikes around and finds the ram. Abraham finds the one who will take his son’s place in the fire.

The Gospel for that Sunday is Mark’s recounting of the Transfiguration. The disciples — Peter, James and John — who are with Jesus on the mountain hear a voice from a cloud. The voice says, “This is my beloved Son. Listen to him.”

There are no further instructions, no elaboration on just what Jesus will say, on what we are to hear.

This Easter, I am thinking of those who hear and heed the voice of Jesus to scour the thickets for every ram, that every bound child might be released.

Melissa Musick Nussbaum lives in Colorado Springs, Colo. This column appeared in the April 2009 issue of Celebration, the worship resource of the National Catholic Reporter. For a free issue:

Spirituality | Easter reflection: Listen to Him

Helping 'the most vulnerable people in our society'

A legacy beyond Catholicism

Eleventh Sunday in Ordinary Time: How it is with the kingdom of God